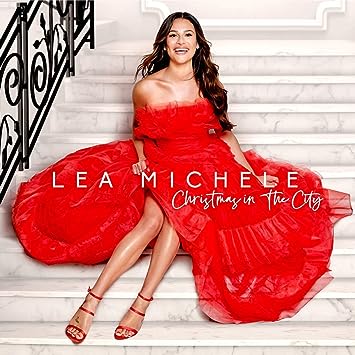 What do you think about when you dwell upon Christmas? Of course, it’s the birth of Jesus Christ and you’re probably thinking about how a humble baby can save us all from our sin and ourselves, but as far as traditions go, what is special to you and your family? I mean for us we travel down to Canberra every Christmas (prior to us having a café 5 years ago!) and we open presents on Christmas Eve with our grandparents. That’s just the thing that we do. It’s become engrained in our tradition. I don’t know about your traditions- you may have a big family Christmas lunch and stuff your face with the turkey, or you might be one of the people in your family to source the live Christmas tree- finding it in the pine forest, chopping it and lugging it back home to decorate. Well…whatever your tradition, I firmly believe now that you can add ‘listening to Lea Michele’s Christmas In The City’ to the list of must do things each year. Even if you’re not a fan of Glee and haven’t heard of Lea’s music before- well I guess you better hop to it and listen to Lea’s first two albums and her Christmas project pronto! Because I believe there probably isn’t another honest and vulnerable artist I’ve heard in recent memory, at least an artist who has gone through such extreme trials and come through the other end with a fresh and clear perspective, with Lea possessing such an exquisite voice that it’s out-of-this-world in a crazy good way, who has moved me in so many ways with her emotional tracks borne out of sadness and pain, but also fashioned together to create something beautiful.

“…It sounds super cheesy, but Christmas is honestly my favorite time of the year. It’s always been my dream to make a Christmas record, because music on Christmas morning and music in general in my house growing up was always so present. Everyone always asks me, “Do you get your voice from someone else in the family?” No one else sings, but I really believe it’s because music played such a big role in my household growing up, especially on Christmas morning…I always remember music playing, and because of that memory, I wanted to make a Christmas record of my own. I knew that when I did, I would really want to honor the city that I come from, because while Christmas is beautiful all over the world and the holiday season in general, whether or not you actually celebrate Christmas, New York during that time of year just evokes so many special memories for me of growing up in Manhattan with my mom and dad, walking by Rockefeller Center, walking through Central Park, going to see the Rockettes. I think that love actually grew stronger when I moved away from New York…” While I have previously extensively written about Lea Michele’s music and how she has influenced my life in my latest Momentous Mondays blog post, here I will specifically expound upon her 11-track Christmas album, given that it’s just under one week until Christmas and this album should be near the top of everyone’s list in terms of ‘must listen this season!’. If you want to read about Lea and the journey from Glee until now, well then read my post in full before reading this review- just because it is pointless for me to rehash and repeat myself. And now that we’ve all caught up to date… there are thousands and thousands of Christmas tunes that have flooded our ears either on radio or on TV or on albums over the years. Each song with a story behind it, and each song either resonating with us or not. So I guess it comes with no surprise that on Christmas In The City Lea has chosen songs (and written one original!) that have impacted her as a person. The result is a Christmas album nothing short of extraordinary and remarkable- and one of my favourite Christmas albums of all time alongside projects from Michael W. Smith, Lincoln Brewster, Pentatonix, Josh Groban, Peter Hollens and Avalon! And as Lea’s strengths as a vocalist lie in being a well-trained and overall awesome Broadway vocalist, it’s comes with no surprise that this holiday album music-wise is rooted heavily and influenced greatly in that genre, with every track having an orchestral/theatre/movie soundtrack vibe- and that is a beautiful thing that Lea has decided to do, to stick to her own ‘genre’ and thus do it well.

You may not love Christmas music that much, but even if you’re like Mr Grinch, Lea’s holiday album will definitely soften your heart. Holiday staples “It’s The Most Wonderful Time Of The Year”, “Have Yourself A Merry Little Christmas”, “I’ll Be Home For Christmas”, “Rockin’ Around The Christmas Tree”, “Silver Bells” and “White Christmas” are all present here, and are all given the ‘Lea Michele Broadway/theatre treatment’- all are in my opinion enhanced musically and vocally by Lea’s enthusiasm for the season and her overall presence. Now I myself aren’t that particularly wowed by Christmas songs of a holiday nature (That is, not singing about the birth of Jesus!), simply because when you analyse the lyrics, these songs are about nothing much in terms of substance; however this album is an exception and I am wowed by these very songs I was certain that I wouldn’t- and this goes to show how brilliant of an artist and performer Lea is! While Lea also delivers her poignant, emotional interpretation of the Frozen classic “Do You Want To Build A Snowman?” (which isn’t really a Christmas song, but anyway!); I reckon it is her original song “Christmas In New York” as well as the songs heralding Jesus’ birth that have grabbed my attention the most on Christmas In The City.

Christmas is all about Jesus- you may disagree but that’s what I believe to be true. Lea highlights this very fact on songs like “Silent Night”, “Angels We Have Heard On High” and “O Holy Night”, which are a few of my own favourite Christmas carols. While I may not know the faith of Lea (I do know that she has some sense of faith, coming from a Jewish and a Christian background in her father and mother respectively), I reckon it’s immaterial and irrelevant when you listen to songs like these- in the aforementioned three tracks, Lea sings out almost in worship. Some of you may reckon that’s not possible, but I believe it is, as Jesus can use anyone to further His Kingdom- even those who do not know Him yet! As such with “O Holy Night”, “Silent Night”, and “Angels We Have Heard On High”, yes Lea worships God perhaps subconsciously, but more than that- she invites others who may not know Him into a glimpse of what the true season is about, and for that alone, this album is indeed necessary this holiday season. Finally, Lea presents us with the soundtrack, Broadway and theatre-like original tune “Christmas In New York”- and as Lea says in her own words ‘…I wrote this song as my real love letter. It’s the anthem of the album, and it just highlights all of the special things New York has to offer. It paints this beautiful picture of New York, but it also is really about what it means to be with your family and friends and engaged in that holiday spirit…’. This song to me is just magical, and when I listen to the track, I immediately want to go to the U.S. in the future, simple to experience a ‘white Christmas’- so kudos to Lea for writing and recording such a gem of a track and one that I’m sure other artists will cover in the future on their Christmas albums!

“…first and foremost, I wanted all the songs on the record to be songs that are my favorite Christmas songs, because I wanted everything about this album to come directly from me and from my heart. So these are all my favorite Christmas songs that I’ve sung over the years and that I’ve played in my home over the years. The producers that I worked with on this record, Adam Anders and Alex Anders, were my right hands during every single song I ever did on Glee. They were our amazing music producers. Then, second, I wanted the sound to have that very similar Glee bright, vibrant, happy essence. So, tonally, that’s where I got my inspiration from. And then even in picking the guest singers on the record, they’re all people who are very special to me. Everything from picking the songs, from determining the sound, from picking the guest singers—it’s all things that are important to me: my favorite songs, my favorite sound and my favorite people…” Usually an artist waits until they have released a substantial body of work over a 10-20 year span for them to even consider recording a Christmas album. I’m not sure the reason for this rule of a Christmas album after many studio albums…but that’s just the way it is. So in that case Lea bucks the trend of releasing a Christmas album only after 2 studio albums. For those who aren’t aware of Lea’s background, her decision to record Christmas In The City for this year is a bit of a left field shock, however a look deeper into her life, and we can conclude that this project is something that somewhat fits- it’s a holiday near and dear to her heart (due to the Christian faith of her mother and Jewish faith of her father), and from listening to the album, I can tell that it’s a special holiday for Lea just from how she sings each track- with so much effort and passion that it’s contagious in a good way! 11 tracks in my opinion is way too short for a Christmas album but Lea makes the brevity of the duration work in her favour, with nothing filler. This release is sure to please even Pentatonix- the king of Christmas albums, and is a welcome addition into an already respected discography from such a sublime artist. Christmas In The City is a must this holidays…so what are you waiting for? If you haven’t heard of Lea Michele’s music by now, now’s a good place to start!