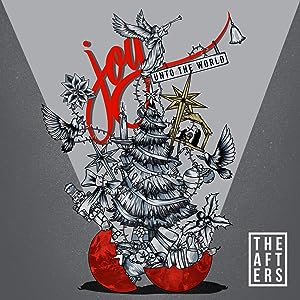 The Afters – Joy Unto the World (Single) (Amazon mp3/iTunes)

The Afters have been a steady and solid music force throughout the years. Borne out of Dallas Texas, and formed by lead singer Josh Havens and guitarist Matt Fuqua, the band have delivered songs that have touched the hearts of listeners all around the world, from songs like ‘Light Up the Sky’, ‘Every Good Thing’ and ‘Battles’, to ‘Live on Forever’, ‘Life is Beautiful’ and ‘Broken Hallelujah’, to name a few. Since signing to Fair Trade Services (then called INO Records) way back in the day, it was (and still is) their heartfelt melodies and inspirational lyrics that continues to give testament to their songwriting ability, as well as having the courage and braveness to make songs that somehow crossover into mainstream TV placements (music in ad campaigns etc.), over the years. Now here we are in 2019, where the quartet released their brand new studio album Fear No More mid year, featuring singles like ‘Well Done’, ‘Lightning’ and the title track. While the album itself received success (though not like the success of the previous albums Light Up the Sky and Life is Beautiful), The Afters still have reminded us that their songs continue to strike a chord with listeners around the world, regardless of sales and what happens commercially. Now here we are at the end of 2019, and the band have given to us something else to tie us over until the next thing- a newly written original Christmas melody in the form of ‘Joy Unto the World’. In fact, this will indeed be their first look into Christmas music as a band…who knows, maybe a Christmas EP/album in the future?

‘Joy Unto the World’ is one of my favourite original Christmas songs of this year thus far. Though not much discussed about the song online (no press release, not much info on Instagram or facebook, the song itself not being promoted as much by the band!), the song nevertheless is a good one, as we see The Afters take a Christmas song that we know, ‘Joy to the World’, and use that theme as the basis of the newly written song. With the concept of ‘Joy Unto the World’ basically being the same as ‘Joy to the World’, it is nevertheless refreshing to hear newly written songs about Christmas and how we can still be reminded of the holy day and still sing a song that is very much grounded in biblical truth, but still delivered in a way that is relevant and relatable to people of today. For me, I’ve always loved originally written Christmas songs- because I tend to feel like a lot of emotion and heart is placed into these types of melodies. Nothing against carols at all, but for me, I’ve always felt that you can only cover carols for so long, until they can unintentionally feel stale. Nevertheless, ‘Joy Unto the World’ is a refreshing take on ‘Joy to the World’ and a song that’s sure to be on my Spotify Playlists for quite some time. A tease or a pre-cursor into the realms of Christmas music for The Afters in the future? Maybe, maybe not. Regardless, I’m going to enjoy the song as it is- a song that is necessary for people to hear at such a time as this. Well done Josh Havens and co. for ‘Joy Unto the World’. Eagerly anticipating more Christmas songs (maybe next year!) whenever they arise.