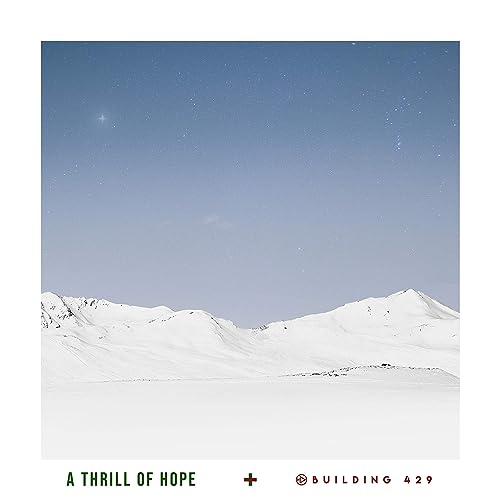 On the heels of releasing (in my opinion) their most inspiring, and strongest album of their whole career (musically, lyrically and thematically) in Live The Journey in September last year; what’s next for Christian pop/rock band Building 429? Jason Roy, Jesse Garcia, Aaron Branch, and Michael Anderson have won a place in my heart with their latest album (read my glowing 5/5 review here!), so you’d think that the next release they’d unveil I’d sit up and take notice, right? Well, you’d be right. Fear No More EP released this year (which I reviewed!), while the band have now unveiled their first foray into Christmas music. A Thrill Of Hope dropped in November, containing two original Christmas tunes as well as two re-worked carols- all of these songs fitting right at home amongst original Christmas songs over the years such as “Christmas Makes Me Cry” (Matthew West), “This Christmas (Father Of The Fatherless)” (TobyMac), “Baby Boy” (for KING & COUNTRY), “You’re Here” (Francesca Battistelli), “Believe” (Josh Groban) and “December Song” (Peter Hollens). While I myself prefer full Christmas albums, and am still apprehensive whenever Christmas EP’s release (in the sense that there’s not enough time on the record to fully convey the enormity of Jesus’ birth!), Building 429 have shown me that in some instances, the EP can be useful, and especially in this case whereby the full impact of Jesus is highlighted here even though we’re unfamiliar with these tracks. So how does the band’s first dabble in holiday tunes?

Well it’s pretty great in my opinion. Immediately my eyes scan over to the EP ender “Glory”, which released last year and is one of my favourite original Christmas songs ever. Essentially a worship song as we hear the Christmas narrative sung from the perspective of the shepherds and the wise men, Building 429 have invited us on a journey as we are presented with the emotions and the feelings of those first-hand witnesses of Jesus’ birth and their opinions about it all. Sure, we weren’t there 2000+ years ago to witness Jesus being born, however this song is one of the ways we can imagine ourselves in that situation. Would we sing out in praise and reverence like the wise men and the shepherds? Or would we be like King Herod? Something to ponder about, don’t you think?

Witnessing a strange star in the sky is that- quite strange. But for the shepherds to actively praise someone they hadn’t even met yet, and for the wise men to travel thousands of miles to give presents (gold, frankincense and myrrh) to a baby boy, is astounding and remarkable to say the least. If a baby was born today who was prophesised to be Jesus, I know that the majority of the population wouldn’t put faith in that, or would think that it’s a trick of some sort. If Jesus appeared today in the streets, would we even recognise Him? Anyway I digress. Going back to the shepherds and the wise men- outsiders would even say that they’re mad, but that’s the beauty of faith in the unseen, right? On the say-so of the prophets, the wise-men and the shepherds believed in something that logic and science say is impossible. But Jesus came to defy expectations and change up the status quo. If you look at his life through the gospels, it’s plain to see a man claiming to be God, who is either a liar, a madman or telling the truth. I believe that Jesus is telling the truth of his divinity, however you may come to a different conclusion- and it’s not my job to persuade you otherwise. Building 429 have delivered a melody full of biblical truth, and here’s hoping that this Christmas/worship song will convict the hearts of many who don’t yet believe- but I guess that’s up to God to mould and shape hearts…

With “Glory” being musically CCM in nature, the rest of the tracks are just as compelling also. “A Thrill Of Hope” is a mashup of well-known carol “O Holy Night” and the Michael W. Smith penned worship tune “Agnus Dei”, albeit a mashup that is a bit clunky and disjointed, but still compelling and impacting; while “J.O.Y.” is as seamless and rocking as Christmas songs go, with Jason and co. marrying together “Go Tell It On The Mountain” and “Joy To The World”. The only other original tune on this 4-song offering is the acoustic guitar led “Birthday Of A King/Extravagant”- also a near-flawless original, and one that emphatically recounts the notion that Jesus’ birthday was a great day because it is His birthday. The birthday of a King and the King of all. Nothing else more special has to happen on that day other than Jesus’ birth, as Building 429 drive home the notion that Christmas holds extra weight once we fully grasp what Jesus has done in His life to make us united back to Him and perfect and blameless in His eyes. What a song and a reminder for us to keep strong in the faith and point people to His presence, holiness and majesty!

Now that Building 429 are not on a label anymore, has anything really changed? A Thrill Of Hope is just as impacting as ever, and as a Christmas project, is one of my favourites of the year. If you’re not a fan of Building 429, then you should be, and this EP is the perfect platform to by introduced to an artist for the ages (and then of course you can work backwards through their discography!). It’s not known what is next for the quartet (a hymns album or a covers album would be pretty cool!), but until such a date where they release something new, let us be amazed at the words of “Glory” and the rest of their Christmas songs, as we declare ‘…glory to God in the highest, and on this earth good will to all men…’. Oh, and listen to Live The Journey too!

3 songs to listen to: J.O.Y., Birthday Of A King/Extravagant, Glory