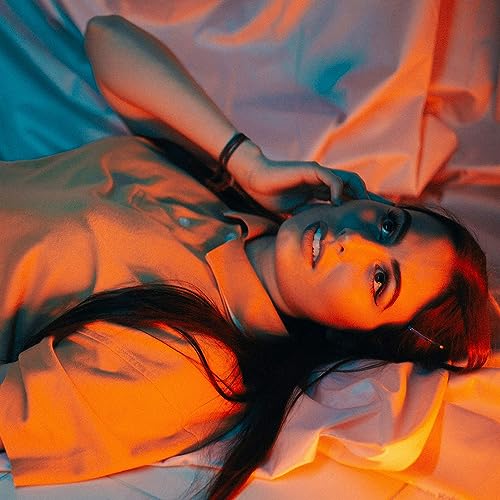 Cimorelli has been one of my favourite sibling-bands over the last few years, alongside other prominent bands, like for KING AND COUNTRY and Switchfoot. And if you’ve been a fan of Cimorelli like myself over the last few years, for any of the band members (who are all in fact sisters) to release some material on their own can initially cause us all to think and ponder- are the band breaking up? Are some members leaving to pursue a solo career? Is the band evolving in ways unimaginable? Whatever our thoughts that come into our heads, we think them. It was the case when Lisa Cimorelli released her new solo material, of which she stated from the start that she was not leaving the band, but rather, doing something on the side in addition. And in 2019 we saw another Cimorelli sister have courage enough to release a collection of songs in a solo capacity. Lauren Cimorelli, the second youngest of the sisters in the group, unveiled to the world her debut EP in July 2019, Orange. Fans of Cimorelli the band I’m sure would’ve enjoyed this EP, as I did back then when I heard it; all the while being proud of the fact that individual band members within a band collective can still venture out and do their own thing, alongside the main band activity. For Lauren to carve out time to create the four songs on Orange, and then send them out into the internet ether, either to be praised or critiqued; takes courage. Since releasing her debut single ‘Running’ in late 2018, and a few songs scattered around 2019; Orange was the first time all of her music could have been accessed in one space. There were songs like ‘Running’, ‘Flames’ and ‘Pressure’ that were standouts on Orange, and alongside the other track ‘Brown Eyed Boys’, formed an EP about relationships and the interesting way that we as humans navigate them, be that in a romantic, platonic or friendship sense. Now fastforward to 2020, and Lauren Cimorelli has since offered to us another EP in the form of Blue, featuring another five songs, each that tackle an element of single and dating life, and the relationships one forms during a time in your life where feelings and attraction seem to be bubbling to the surface and are some of the central and core things that people often think about at that age. Songs like ‘These Days’, ‘Rabbit Hole’ and ‘Automatic Love’ were standouts from Blue, an EP from Lauren that was also a great reminder of this young woman’s talent, both inside Cimorelli the band, and on her own. She also released an Orange + Blue full length album consisting of all the songs on Orange and Blue in one collection, and now here we are in October 2020, and yet another album from Lauren has released as well- this time it’s Orange + Blue (Stripped); a collection of 9 songs all from her two EPs, and all of them redone without all the electronics and just the keyboard/piano instead.

So how do I make sense of this album? Well, if you want to know my thoughts on the songs themselves, then check out my reviews of Orange and Blue, and so for this ‘review’ of sorts, I’m about to discuss more of the piano arrangements than anything else…and first glance, listen, and assessment of these songs? They are indeed thoroughly enjoyable. Yes, the electronics aren’t there, and I may need to find a little more time to get used to these acoustic stripped-down versions. But all in all, these renditions make the song extra vulnerable and make me enjoy the original tracks even more. For when something is done acoustically, there is an added sense of vulnerability in the voice and the song itself- because there’s no musical overlay, the acoustic guitars (or in this case, a keyboard) and the voice have to carry the track on their own- no looping percussion, no electronic influences, just the voice, and the sole instrument involved. Songs done in an acoustic setting either make or break the song; and remind us all that some people just have talent to create things acoustically (and the acoustic renditions thrive) and some just…well, don’t. For Lauren’s case, she’s an excellent deliverer of the music within the confines of the acoustic setting, and it is in these renditions of her songs, where I find the most emotion and poignancy present. For me this is a much more heartfelt interpretation of the songs, much more so than the original counterparts. Well done Lauren for these stripped-down recordings, and for these versions that in fact breathe new life into the original recordings as well. Can’t wait for whatever is in store in the future…maybe a full-on worship album in the future? Whatever the case, Orange + Blue (Stripped) is an album certain to be enjoyed if you’re a fan of Cimorelli, of Lauren’s original music, or of pop music with an independent standpoint.  So what are we all waiting for? If we’re a fan of vulnerable music, as we all should be, then take a listen to the heartfelt moments of this full-length album, as we let the Lord God speak to us and remind us all of the relationships in our own lives that we need to look at, mend and heal in some certain cases, as we’re reminded that even though relationships in an earthly sense can come and go, our relationship in Christ is firmly planted on what He’s done for us, and will not waver with time and years.

3 songs to listen to: These Days, Rabbit Hole, Running