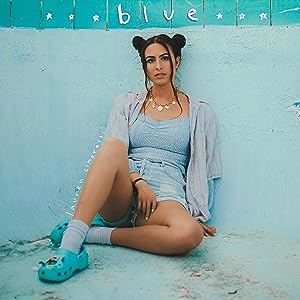 Cimorelli has been one of my favourite sibling-bands over the last few years, alongside other prominent bands, like for KING AND COUNTRY and Switchfoot. And if you’ve been a fan of Cimorelli like myself over the last few years, for any of the band members (who are all in fact sisters) to release some material on their own can initially cause us all to think and ponder- are the band breaking up? Are some members leaving to pursue a solo career? Is the band evolving in ways unimaginable? Whatever our thoughts that come into our heads, we think them. It was the case when Lisa Cimorelli released her new solo material, of which she stated from the start that she was not leaving the band, but rather, doing something on the side in addition. And in 2019 we saw another Cimorelli sister have courage enough to release a collection of songs in a solo capacity. Lauren Cimorelli, the second youngest of the sisters in the group, unveiled to the world her debut EP in July 2019, Orange. Fans of Cimorelli the band I’m sure would’ve enjoyed this EP, as I did back then when I heard it; all the while being proud of the fact that individual band members within a band collective can still venture out and do their own thing, alongside the main band activity. For Lauren to carve out time to create these four songs, and then send them out into the internet ether, either to be praised or critiqued; takes courage. Since releasing her debut single ‘Running’ in late 2018, and a few songs scattered around 2019; Orange was the first time all of her music could have been accessed in one space. There were songs like ‘Running’, ‘Flames’ and ‘Pressure’ that were standouts on Orange, and alongside the other track ‘Brown Eyed Boys’, formed an EP about relationships and the interesting way that we as humans navigate them, be that in a romantic, platonic or friendship sense. Now fastforward to 2020, and Lauren Cimorelli has given to us another EP, this time titled Blue, and featuring another five songs, each that tackle an element of single and dating life, and the relationships one forms during a time in your life where feelings and attraction seem to be bubbling to the surface and are some of the central and core things that people often think about at that age. Presented in a pop-EDM format, Lauren’s music as a whole, features more of an edge compared to her Cimorelli band stuff- and maybe that’s ok. For me it took a little time for me to be used to her musical style when Orange released, but as we come across Blue EP, we see a budding young talented artist ready to showcase to the world her songs…here’s hoping she continues along with Cimorelli the band at the same time as her solo material, as well!

With these songs being released at various points throughout this year, Lauren’s 5 song EP is one of introspection, heartfelt emotion, and poignancy that a lot of people can relate to when they themselves were in their twenties and focusing on relationships and the implications of those on everyday life. ‘These Days’ is a song about lamenting the end of a relationship, and while on the surface, it can be about a boyfriend-girlfriend relationship gone good and then unfortunate; the lyrics can also paint the picture to be that of any friendship or relationship ending, for one reason or another. It’s as part of life when people come into your life and then leave- people drift away from each other, and sometimes, all you can do is just be sad for what was lost. This song is one of feeling sad just because, as we’re reminded that it is ok to feel that way for a while. As Lauren herself relays to us about the song; ‘…I tend to be a little bit obsessive so when I say “all I do is think about you these days” it’s not an overstatement. Unfortunately you can’t control who stays and who leaves and even when you try your hardest but you can’t always control your mind and stop yourself from thinking about someone when they do leave. I think loss is one of the hardest things to understand. It just doesn’t make sense how someone could be there one day and be gone the next. I think we sometimes think that if we could just think about it enough and go through the story over and over and over, one day we’ll understand what happened and what went wrong and how to move forward. I’m not sure that’s how it works though. Some things just don’t make sense and that’s the only answer there is…’ Electronic and at times full of perceived autotune, ‘These Days’, the first song unveiled to us in April 2020, is the first of many emotive tracks, that can be related to if you enjoy similar artists like Cimorelli, or even Lauren’s sister Lisa Cimorelli.

Throughout the rest of the EP, Lauren presents to us themes that people who are single, in relationship, or even out of relationship, can all relate to, under the guise of relationships in all its facets being hard to navigate during your 20s and 30s. ‘Atom Bomb’ describes a graphic and vicious end to a relationship gone wrong, that doesn’t have any hope of restoration, and a reminder that sometimes in our lives, if our guard isn’t up, we can be susceptible to relationships that are as toxic as described in the song, while ‘Automatic Love’, quite possibly the most personal song on the album for Lauren, describes a point in her life when she was in a relationship with someone, but realises on reflection and hindsight that the period of relationship was when she was on automatic- written after her first ‘proper’ relationship, Lauren’s heartfelt words in this song show us that in this particular relationship, she felt as if the power was unequally balanced, that she had no say in it. Upon the dissolution of said relationship, ‘Automatic Love’ was borne, out of a realisation that to be in autopilot in relationships is only a recipe for disaster. ‘Ghost’ stands at 2 minutes, and while this EP ender isn’t as vibrant and rousing as songs earlier on in the EP; the song itself presents a certain theme we all need to ponder. Lauren in this song calls someone her ghost, and by all accounts of popular culture and media, a ghost is someone that refuses to move on to the other side, because of unfinished business. To call someone her ghost after a relationship, means that she can’t seem to shake him from her mind-she can’t move on from him, and it’s something she needs to grapple with ask why.

‘Rabbit Hole’ though is actually the most emotive and heartfelt song on the EP, as it speaks about this universal issue of connection and not feeling alone- even subjecting yourself to abusive relationships and going crazy all with the noble result of not being alone in your life. As the song delivers a lot of allusions and metaphors relating to Alice in Wonderland, Lauren presents a persona who knows all these things about the other person, how they’re bad for them, and yet, they pursue such a relationship anyway to avoid the loneliness. As Lauren herself imparts to us, ‘…this song is about plotting your own demise. It’s about going after someone who you KNOW is never gonna be with you. It’s not gonna work, it’s not gonna happen, you’re just gonna end up with a broken heart. BUT you are desperately lonely, and you also have some mental issues, so you do it anyway. I wanted to capture the roller coaster of emotion that comes with choosing such a dark fate for yourself, so this is one of the weirdest songs I’ve ever written. It changes keys like 10 times and each section kinda sounds like a different song. But when you put it all together it’s a perfect disaster. An illusory journey of sorts. Much like when Alice fell down the rabbit hole and found Wonderland. Kinda fun, kinda scary. A nice escape from reality, but ultimately a delusional dream from beginning to end. And when you wake up from it, you are just as alone as you were before it all started…’

Lauren’s second EP is one that is certain to be enjoyed and loved if you are a fan of Cimorelli, more importantly, a fan of their annual Best Of albums, as well as their 2018 EP I Love You Or Whatever and their 2017 album Sad Girls Club– that era of music in particular. Lauren has taken a piece of herself and placed it onto the page, and Blue EP is a result. Though at times the songs can seem a little too electronic for my own liking, or even not as ‘refined’as many other songs from artists that are on a label, it is the presence of this passionate and authentic quality (because of Lauren and Cimorelli themselves being artists that are independent) that will encourage us all to take a step and hear more vulnerable and impacting songs from more indie artists in the future, rather than the radio pop consuming homes at the moment. Well done Lauren for such a heartfelt EP, here’s hoping for many more in the future. Maybe, just maybe, she can continue to undertake her solo material and her Cimorelli commitments in tandem. Looking forward to whatever the new solo material brings in the upcoming months ahead. So what are we all waiting for? If we’re a fan of vulnerable music, as we all should be, then take a listen to the heartfelt moments of Blue EP, as we let the Lord God speak to us and remind us all of the relationships in our own lives that we need to look at, mend and heal in some certain cases, as we’re reminded that even though relationships in an earthly sense can come and go, our relationship in Christ is firmly planted on what He’s done for us, and will not waver with time and years.

3 songs to listen to: These Days, Rabbit Hole, Automatic Love