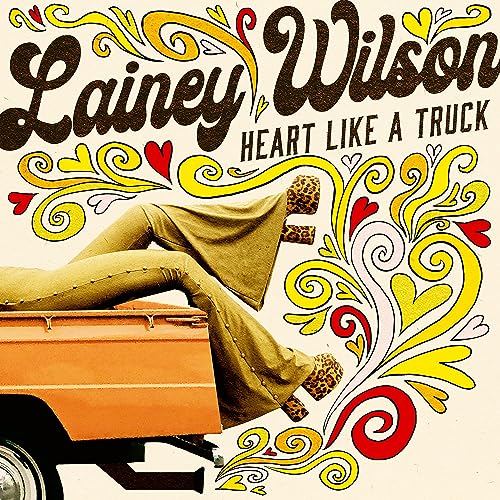 One of the buzziest artists at the moment- one of the few artists that people seem to be talking about and that I reckon will have a long career; is country artist Lainey Wilson. With Lainey having released her label debut album Sayin’ What I’m Thinkin’ at the beginning of 2021 (an album we as a site probably should have reviewed!); Lainey was present in our honourable mentions’ list of artists who will be influential throughout the next 5-10 years. Lainey has been nominated for and won plenty of country awards; and her vulnerability, openness, and honesty, in her lyrics, as well as her heartfelt emotion and power behind her voice, remind us all, that she is indeed a rising star, and someone we should listen to and support in the coming weeks, months and years. It’s a shame that we as a site didn’t review Sayin’ What I’m Thinkin’; but when Lainey released “Heart Like A Truck”, her brand new single around about a couple of months ago… well, we decided that we needed to give our opinion. And therefore, as I now ruminate and mediate upon these emotive, powerful, compelling, and inspiring lyrics… well what do I really think of them? The short answer? Is that Lainey has done it again and has delivered to us a powerhouse melody that is sure to create discussion and provide us comfort and inspiration.

These past few months have been such a whirlwind, but man, it was quite the journey to get here. Miley wasn’t playing when she said, ‘it’s about the climb,’ because it really is what builds character and teaches you the most about yourself. This is a song about finding freedom in strength, and not being afraid of your scars and bruises. A truck that has hit a few bumps and earned a few scratches has proved itself and its tenacity…the shiny one on the lot can’t say that. I’ve been through some s***. We all have. But when you get through it, you’re stronger and better for it on the other side. Nothing can hold me back from moving forward and finding a way to enjoy life, no matter what. I hope this song reminds y’all of that.

I learned to ride horses before I learned to walk so, I felt right at home on set, but I’ll admit, I was a little nervous to really do character acting for the first time—it ended up being such a creatively fulfilling and thrilling experience.

I worked with Elizabeth for a Frito’s commercial spot with Yellowstone and was so impressed by her talent, I had to have her be a part of this project—she really wowed me on this one. It was also really cool that it ended up being a whole team of badass women in charge of bringing this thing to life. It ain’t every day that you walk on a set and have a female director, executive producer, director of photography, etc. so them all being able to relate to the protagonist made me feel like there was an extra level of care, it was really special.

“Heart Like A Truck” essentially is a melody about persevering through the hard times, getting back up when you’re down, and having resilience and determination. With Lainey singing about the difficult times in her life and comparing it to a rusty old truck; she relays to us that her heart is like that truck that seems to be broken down, but still is durable and still works. In essence, Lainey is conveying to us that her heart is strong and that she can handle anything life throws at her. It’s a powerful melody, and Lainey’s vocals have never been better (think a young Dolly Parton!); and so… I’d say that’s all you need to know, and I reckon you all should listen to this melody, and quickly!

It was some hard days. It [living in a camper trailer] taught me that this thing was not going to be easy. It taught me perseverance. And when things didn’t work out my way, when doors closed right in my face, that made me work harder. I could sit here and tell you sob stories all day about my life and moments where I was living in a camper trailer and things were falling down all around me and people were passing away. It was just hurt. ‘Heart Like A Truck’ is semi-autobiographical I guess you could say. It’s about finding freedom in strength, not being afraid of the scratches and the scars along the way. It’s about embracing those things because at the end of the day that makes you, you!

Lainey Wilson has given us a gem of a track. It’s probably not a melody for those who only love pop, or those who only love CCM; but if you’re willing to give Lainey a try, then I promise you, you won’t be disappointed. This concept of going through hard times and persevering may be cliché… but Lainey’s delivery of the song is on point- and I can’t stress enough to all of you that she will probably be one of the biggest female country stars very, very soon! So, what are you waiting for? listen to “Heart Like A Truck”, and be amazed at Lainey’s prowess as a singer and as a songwriter!