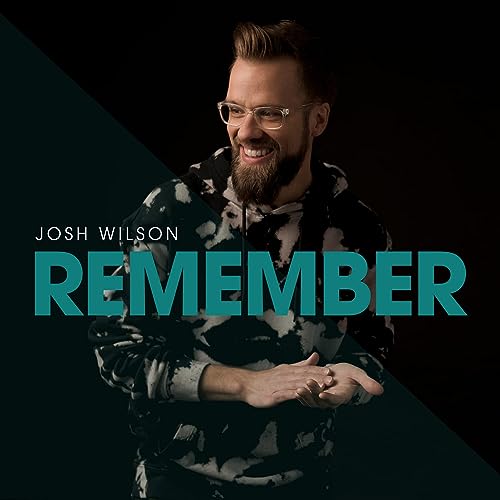 Josh Wilson has always been the quiet achiever. Plugging away at song writing and releasing melodies that tug at the heart. From songs like ‘That Was Then, This is Now’, ‘Carry Me’, ‘Pushing Back the Dark’, ‘Saviour Please’ and ‘3 Minute Song’, to ‘I Refuse’, ‘They Just Believe’ and ‘Fall Apart’ to name a few; we are reminded that Josh Wilson is once again the multi-instrumentalist, as he recently dropped his new EP Remember just a few days ago, comprising of the songs ‘Revolutionary’, ‘Undeniable’ and ‘Remember’, and a few more; upon the heels of his highly successful Black River Christian debut EP Don’t Look Back at the end of 2018, with the standout songs ‘Borrow’, ‘Dream Small’ and ‘OK’. Josh’s talent as a multi-instrumentalist makes him one of the most underrated singer/songwriters I’ve heard and enjoyed within the last few years. Josh has always given us stories to think about and songs to sing, and nothing is any different in this new EP that just released. Whether this EP is part of a larger full-length project with Black River Christian coming out later on in the future, it remains to be seen, but one thing is true- even with this EP, Josh is still one of the most unique artists I’ve come across this side of the millennia (I can’t even think of any other artists that can undertake the acoustic guitar, electric guitar, bass guitar, keyboards, ukulele, banjo, glockenspiel, as well as some percussion with such poise and professionalism), as we’re reminded through hearing these songs that love and grace and kindness, though not necessarily revolutionary concepts per se, can still seem like they are, to a lot of people that may believe that giving grace, showing kindness and loving without condition shouldn’t be as unconditional as it really is.

‘Revolutionary’ released at the end of April 2020, and to date, has become one of my favourite songs that Josh has released recently. It speaks about this notion of kindness, and how it seems like a term that people equate with someone being deserving, to even receive it in the first place. We know that as children of God and as Christians, we are called to show kindness regardless, and that in turn would show the world that the way we love people and show kindness to the ones that are indeed different from ourselves, is how the Lord our God in heaven shows kindness and love to His creation. This song is a perfect one to reflect and meditate on during a coronavirus pandemic season, as we seek out new and ingenious ways of how to show kindness and grace to each other in need. ‘Revolutionary’ is a reminder, that showing kindness is always a choice, and during such a season where everything is up in the air, the little acts of ‘nothing much’ as we may often call it, can seem like ‘the world’ to the other person, and such, ‘Revolutionary’ is one where we are called to something more than the self-centred life we can often lead during this time of isolation. Yes, physical distancing and socially distancing can be a bit of an issue, but such a song as this, can hopefully encourage us to see outside ourselves and see who the person is, that the Lord want us to encourage and to challenge during this time of uncertainty and waiting, between the now and the not yet. Co-written with former North Point Worship frontman Steve Fee, this song is a chance for all of us to step into the kindness that the Lord has called to during a time where people are needing kindness in their lives, more than ever.

‘…I wrote “Revolutionary” in October of last year [2019], not knowing anything about what 2020 held. I never could have imagined that this year would bring both a worldwide pandemic and the racial tipping point we’ve experienced because of the murder of George Floyd and so many others. All that I knew is that in the USA, 2020 was already set to be a divisive and polarizing year due to the upcoming presidential election. When I sat down with my friends James Tealy and Steve Fee to write these lyrics, we wondered if we could pen something that would inject a little bit of hope into the political situation, we’d all be facing in the coming months. It seems natural, almost effortless, to focus on our differences with others rather than our similarities. Drawing attention to those differences keeps us glued to the news and social media because of the moral outrage we feel towards the “other.” I think there’s a better way though, and that’s the way of empathy and understanding, the way of kindness. We started with the lines, “maybe you’re not like me, maybe we don’t agree, maybe that doesn’t mean we’ve got to be enemies.” No matter what side of the political spectrum we’re on, deep down I know that we are not as different as we are led to believe. There is peace to be made, there are names to be learned, meals to be had, chasms to be crossed, and it all starts with kindness. I didn’t intentionally write “Revolutionary” for the pandemic and for this specific moment of racial tension and reconciliation, but I’m so glad this is the song I get to sing during this time. As I listen to, learn from, and come alongside my brothers and sisters of color, my prayer is that I will proceed with courage, compassion, and kindness. I’m reminded of the words of the late Fred Rogers, who says “When I was a boy and I would see scary things in the news, my mother would say to me, ‘Look for the helpers. You will always find people who are helping.’” I want to be a helper. I want to strive for revolutionary kindness in each and every situation. I want to ask the question, “What would Jesus do?” And I want to remember that the answer is always, “He would love first.”…’

‘Undeniable’ released digitally earlier on in 2021 (February), and the review can be viewed here, but in a nutshell, the song is about how Josh himself can see the workings of God all around him, and that His presence is indeed, undeniable. For once we taste and see that the Lord is good, and really understand that the God who was the God of the Israelites way back then, is the same God who sent His Son Jesus to be the reconciler of man to God, that He’s the same God who is right now stirring in our souls and creating a moment in time where we all awaken to His reality and His story…well, that’s when we can utter and declare these words alongside Josh, and really believe the fact that He is as undeniable as people claim. As Josh himself relays about the story behind the song, we can see that ‘…I believe we have the ability to see God, no matter where we look. When I was young, I remember being on fire and so confident in my faith and in who God was and is. Sometimes though, especially as I get older, those feelings don’t keep up with my faith, but I still believe what Romans 1:20 says, ‘for since the creation of the world, God’s invisible qualities, His eternal power, and divine nature have been clearly seen being understood from what has been made.’ So, even if I can’t always see God directly, I see evidence of him everywhere I look, in the beauty of the world he has made, in the songs that we sing, and especially in other people since we’re all made in God’s image. I’m very thankful for the days when I actually feel what I believe, but even on the days when those feelings aren’t there, I believe that God has made his presence and his love, undeniable…’

‘Remember’ is the last song here on this EP (aside from the Spanish version of ‘Revolutionary’- ‘Revolucionario’, and the acoustic version of ‘Undeniable’), and it is in this song that I’m once again reminded of how underrated Josh’s music really is. Presented with the backdrop of an acoustic guitar, Josh presents this song that allows us to hopefully remember all the promises that He has given to us in time gone by, and hopefully draw upon our past experiences as examples of Him coming through for us. And it is in these times of remembering how our God has come through for us then, that we can have faith, confidence, and assurance of what we are experiencing both now and into the future. God always works things out for His glory and our good, even if we can’t see it in the moment, and ‘Remember’ is a way for us understanding this. As Josh himself reminds us, we see that ‘…whenever things get difficult and it’s hard to see God at work, sometimes it’s helpful for me to look back and remember all He has already done. That’s what “Remember” is all about…’

Remember EP may be a tad short (only three original songs, an acoustic rendition, and a Spanish version of a track as well), but what it lacks for in track length, it makes up for in terms of passion, heart, ingenuity and poignancy, as Josh continues to become one of CCM’s most diligent and underutilised, as well as being a force in an industry that is still feeling a little tired and underwhelming, when looking at the grand scheme of it all. With Josh always being one of my favourite male CCM singer-songwriters for quite some time, it is good to see Josh himself deliver songs of gratitude and kindness, especially for the season of time that we are in- hopefully in the upcoming weeks and months ahead, these songs can minister to people’s hearts and become people’s anthems as the weeks roll on. Will there be a full-length album by Josh on Black River Christian in the future? Maybe, maybe not. But one thing nevertheless still remains. That Josh’s work speaks for itself, and his new songs, especially ‘Revolutionary’, are some of the best work he’s done in a long, long time (in fact, these songs are as poignant as songs like ‘Before The Morning’, from all those years ago). Well done, Josh for this compelling EP, hope there’s a full-length album in the works, maybe in the months ahead!