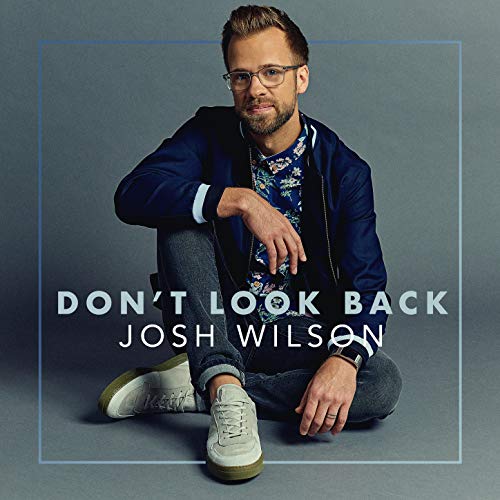 Josh Wilson has always been the quiet achiever. Plugging away at song writing and releasing melodies that tug at the heart. From songs like ‘That Was Then, This is Now’, ‘Carry Me’, ‘Pushing Back the Dark’, ‘Saviour Please’ and ‘3 Minute Song’, to ‘I Refuse’, ‘They Just Believe’ and ‘Fall Apart’ to name a few; we are reminded that Josh Wilson the multi-instrumentalist has once again delivered with this new project Don’t Look Back, his first on new label Black River Christian. In fact, Josh’s talent as a multi-instrumentalist makes him one of the most underrated singer/songwriters I’ve heard and enjoyed within the last few years. Josh has always given us stories to think about and songs to sing, and nothing is any different in this new collection of 5 songs. To be honest, one of the most unique artists I’ve come across this side of the millennia (I can’t even think of any other artists that can undertake the acoustic guitar, electric guitar, bass guitar, keyboards, ukulele, banjo, glockenspiel, as well as some percussion with such poise and professionalism), Josh Wilson has always written songs that are honest and heartfelt. Having an ability to deliver and write some of the most relevant songs I’ve heard, inclusive of all the melodies I’ve heard on Don’t Look Back, 9 years and 5 albums, and an EP, later, Don’t Look Back is unveiled at a very timely moment in the world’s history, as we’re reminded as a whole human race to slow down and to not worry, especially in global situations where worry seems to be at the very forefront of decisions and how people carry themselves in the climate of today!

Released as the first single of the EP in early March, ‘Dream Small’, is a step in a direction that we haven’t really seen much of in the CCM industry currently. Presenting to us a notion of dreaming small rather than dreaming big, we as Christians and even has humans can be forgiven to be offended with such a notion as to only dream small. Because really, why can’t we dream big? Why can’t we have all these aspirations and hopes, things we want to do in the future and what, in a nutshell, we want our 5, 10 and 20 year plan to look like? ‘Dream Small’ by Josh seems to counteract such a notion we have been believing for our entire lives. Does that mean that what we have believed for so long isn’t so anymore? Rather the contrary. We have been called to greatness, by our heavenly Father. Our gifts and talents have a way of coming to the surface, that what we do in the future will change the world we are in, that where we are, is where we’re supposed to be at that point in time. We can look to the future and have great plans, and that’s good, we should have goals and long-term vision. But often, planning and looking forward is at the expense of the now. We often miss the opportunities the Lord has for us around the corner because we’re so busy making a plan, for what is over in the distance.

As Josh Wilson relays himself, ‘…I wrote my new song ‘Dream Small’ as a celebration for all the people who are quietly changing this world one simple act of kindness at a time. This is for moms and dads who are loving their families, this is for students who are choosing compassion over bullying, this is for those in ministry who day in and day out show the love of Christ with little to no thanks. This song’s for YOU. You have the chance to change the world like nobody else can. If you’re like me maybe you get overwhelmed with the great need you see in the world but all we have to do is open our eyes to the opportunities that are right in front of us…’  ‘Dream Small’ is not against making plans or even having them. It’s not even against dreaming and aspiring in general. Rather, it is the things we undertake on a day-to-day basis that will have the most impact in someone’s life. Think about tomorrow. Today. What we can do to make someone’s day better. How what we say can either encourage someone or make a dent in it. There is no neutral- it is either one or the other. That is what ‘Dream Small’ is a reminder of, for me at least. That sure we can be all grandiose and hope for the Lord to use is in big and magnificent ways, but often, it is the little day to day stuff that often has the impact the most, and often isn’t as recognised as it should.

Throughout the rest of the EP, Josh invites us to partake in a myriad of varying themes that are central to the Christian walk, and a reminder that this life we’re in isn’t meant to be perfect, but rather, our lives, as messy as they are, ought to point to the one who is. Track #1, ‘Self Less’, is an encouragement to think of ourselves after we think of others, that a song like this isn’t about thinking less about ourselves (for Jesus thought the world of us, that’s why He came to die and rise, so we can be brought back to Himself), but rather, placing others needs and the lives of others before our own ought to give us a sense of what Jesus did for us, humbling Himself even to the subject of death for our reconciliation. A great first track to the album, Josh segues into ‘OK’ and ‘Borrow’, both of these are, what I reckon, potential radio singles in the future (note: as of now, ‘Borrow’ is officially a radio single releasing to radio outlets in early January 2019!). ‘OK’ is a humbling moment where we realise to be vulnerable is a sense of strength, that it is ok not to be ok.  To really open up and be real and raw, even if it means for us to show our scars we don’t want others to see, is a testament to who God is and His change in us, and will hopefully give others courage to do the same! ‘Borrow’, a song all about worry, is a personal one for Josh. A reminder that we all need to let go of our need to control and therefore trust God that He has things in the palm of His hand, Josh continues to look to the future in the timely track ‘Don’t Look Back’, as we are called to, as Christians, to keep pressing on and looking forward, being reminded of where we came from, and what the Lord has done to bring us from where we once were to where we are now. Yet it is a song like ‘Borrow’ that is a standout (alongside ‘Dream Small’), and a track that will impact many people as the months and even years pass. Below is an excerpt of an interview Josh did for the song, and is in light of this excerpt that makes me assert that ‘Borrow’ will be one of Josh’s most successful songs…ever!

“Maybe you’ve heard the saying, ‘Don’t borrow trouble.’ It means that today has enough trouble of its own, so there’s not point in borrowing any from the future. Jesus tells us the same thing in Matthew chapter 6, when he says, ‘Do not be anxious about tomorrow, for tomorrow will be anxious for itself.’ Sometimes I find that to be hard advice to follow, as I’ve dealt with anxiety for much of my life, and I tend to get worked up pretty easily. Rather than taking life one day at a time and following Christ’s call to ‘seek first the kingdom of God and his righteousness,’ I often find myself preoccupied with the future, constantly playing out worst case scenarios in my mind. Often, the future seems like a giant dragon that I’m sure I won’t be able to slay. Its shadow looms over me, causing me to fear the worst. However, many times, as I get closer to that dragon, I realize it isn’t a dragon at all. It’s just a tiny lizard shining a flashlight on itself, making its shadow look much bigger than it is. My worries about the future often eclipse the actual struggle I face when it finally becomes the present. I wrote ‘Borrow’ as a reminder to live in the here and now, to trust that God is in control. Of course I still need to plan and prepare for the future, but all I really have control over is my reaction to this very moment. This song is a conscious decision to trust that ‘In Christ all things hold together’ (Colossians 1:17). That means that God holds not only this moment, but every moment to come. Because of that, there’s no need to borrow any trouble from the future, and I’m able to take life one day at a time.”

With honesty that is as frank as what it should be (but not necessarily the case) in the CCM industry, Josh has continued to tackle issues that a necessary for us to hear- in this case, it is for us to dream small as well as dreaming big. In tandem. To know that it is ok not to be ok, but also be encouraged that worries that we often collect for ourselves are only reserved for the day that they are for, not for us to take the worries for tomorrow and place them for today. Josh’s poetic nature in writing songs is what has drawn me to his music in the first place, and that is nothing short of being true, in his new EP offering. Though a little too short, this new collection of songs is hopefully just an appetite of what to expect from Josh in the near future when he hopefully unveils his first full-length project under Black River Christian. Well done Josh for such an innovative selection of songs; fans of artists like Brandon Heath, Bebo Norman or Steven Curtis Chapman will be sure to enjoy an album by personally one of my favourite songwriters this side of the 2010s!