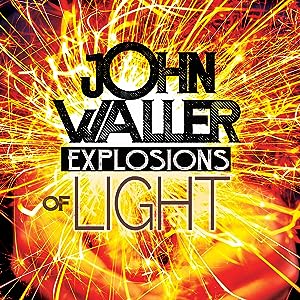 John Waller has had his time in the spotlight. In some ways far more than an average CCM artist. Being touted way back in the day as following in the footsteps of Casting Crowns (who was the artist/band that discovered John and had a hand in the unveiling of John’s label debut, The Blessing), John has been since known for his chart-topping songs like ‘Crazy Faith’ (featured in the powerful movie War Room), ‘While I’m Waiting’ (from the Kirk Cameron movie Fireproof), ‘As For Me And My House’, ‘Still Calls Me Son’, and many, many more. And while John departed Reunion Records mid-way through his career, his message still stayed the same- Christ focused, as we’re reminded to live with abandon, putting into practice the faith we have as a result of what Christ has undertaken on our behalf. John’s passion for the church and delivering songs that can bring listeners hope and a closeness with God has been evident in his music- and together with songs like the ones aforementioned above, comes a heart John has for adoption and taking care of children who don’t have a home for themselves. John has been able to minister to others for years, yet there’s something different about this project compared to the rest. As John readied his release of Explosions of Light, what has resulted in 11 songs of powerful declarations and assertions has been borne out of a season of uncertainty and mental exhaustion. As John himself relays, ‘…after touring extensively for 10 years straight, I settled into a rut- I began to survive instead of thrive. Everything I said from the stage was something God did in the past, but hardly ever what God was doing NOW… This has been a huge change for us [taking a worship/pastor position at Hope Point Nazarene], but we could not be happier. ‘Explosions of Light’ was the first song birthed here in California. It was written on my worship team’s first writers’ retreat. Inspired by something I heard Louie Giglio say once, ‘Whenever we say things like ‘hallelujah’ there is literally an explosion of light into the spirit realm!’ I hope this song, somehow through the hand of God, might explode into the church and prepare the way for many worship songs to come! …’

And though throughout all of his time in that ‘rut’, God was still using John, as he steadily released albums, encouraging us listeners on this journey of life. John’s enthusiasm for the church (though recently it was waning a little because of his personal issues) and giving us songs that show us a hope and closeness to God through music has been one of the reasons why I reckon John’s one of the most underrated pop/contemporary CCM artists within the music industry currently. What has come about after 3 years of basically radio silence (aside from his single ‘Awakening’ that unveiled to us sometime in 2017) is a 11 track album of enthusiasm and Casting Crowns-esque pop, even if that type of pop has been done for years and years. Still, John’s ministry in giving listeners a collection of songs to sing in all seasons, is shown through Explosions of Light, as we’re reminded through John’s transparency that every album that someone creates has to be with a mentality that it could be their last. As John himself says best, ‘…I don’t take for granted the privilege of getting to make music. After every album I do, I wonder if it could be the last, so I really make sure I put it all out there, investing my whole heart. This is by far the most upbeat and best album I’ve ever done…’

Opening up the album with ‘You Say I Am’; John explodes musically with quite possibly one of the most upbeat songs on the album, with littered electronics and John declaring a theme that is very much similar to Hillsong’s ‘Who You Say I Am’. While I’m sure it was unintentional, John nevertheless delivers a theme that I’m sure we very much need to hear again, this time with such power and an upbeat nature as John himself powerfully reminds us that we can rest in who we are, because of who He is and what He has done for us. Lyrically, the song itself leaves us all a little wanting, with the repetition, for me, drawing a little back from the message of it, while the title track ‘Explosions of Light’ fairs a little better, with this one being the ‘dance number’ representative on the album as John encourages us that God’s love in us and given to us ought to be explosions of light, a reminder to each of creation that the creator is wanting for union and communion with humankind. As John himself discusses, ‘…I hope “Explosions of Light,” somehow through the hand of God, might explode into churches and prepare the way for many worship songs to come. There are several Scripture references that connect to the song, including the Philippians 2 passage… When we encourage someone and engage with someone who isn’t like us and doesn’t agree with us about everything, that’s an explosion of light in the darkness. Often the religious, like the Pharisees, don’t like loving people who aren’t in their circle. That’s not what Jesus taught us. He wants us to pierce the darkness by loving people outside the walls of our church. Love the people in the city where you live and be explosions of light in your community…’

‘Awakening’ debuted to listeners a little under 2 years ago, and while this song is taken directly from the single (with no re-working or even a re-recording), the song nevertheless is a great inclusion on this album, and is, by definition, a fun song. ‘Awakening’ is about something else that is different and unique, compared to anything that has been sung much before in Christian music- coffee. Its such a weird thing to sing about Jesus and coffee, and thus compare one to the other. Yet John does it; and does it well. Standing at only 2:48, this song that’s acoustic guitar driven, alongside his trademark enthusiastic voice, John invites us to drink from the Everlasting Father and delve deep into His Word, something that will give us the energy and kick far more than a coffee can do! ‘Epic’, originally recorded on his 2014 album Life is a Gift and again for his 2015 North American release under the album title Crazy Faith; ‘Epic’ is re-recorded again with a few lyrics tweaked here and there, but virtually the same compared to the previous two versions. Nevertheless, ‘Epic’ as a song is another standout on the album, in a musical, lyrical and stylistic sense. We are reminded through the gang vocals and electric guitars that ‘…You are epic and glorious, awesome in power, galaxies sing majesty, holy is the King of Kings…’ A song that is as ready for the church to sing as the church is willing to give a song that is from left-field, ‘Epic’ is a song that I see the church taking hold of an singing congregationally in the future, declaring God’s epicness as a whole familial unit. The song itself primarily focuses on John’s drumming ability alongside his distinct voice, as John continues to draw upon personal experience for a fair amount of his songs, ‘Epic’ included. ‘Mama’s Prayers’ is about a mother’s constant love for her children, even if they are led astray in their lives for whatever reason, and the constant praying and hoping, that she will do, for God to intervene and bring them back home- while I don’t know if ‘Mama’s Prayers’ was in any way autobiographical, John nevertheless delivers this song with passion and poignancy, making this song one of the highlights on Explosions of Light.

‘Mine’ evokes a Matthew West-esque spoken story-and-song vibe as John himself divulges the meaning behind this heartfelt song- ‘…‘Mine’ is about my kids and the Father’s love for His children. The second verse literally talks about an incident where my 13-year-old daughter had a crush on and was texting with a 16-year-old boy. When I found out, I took that phone away. She doesn’t understand the reason I get all like Liam Neeson, but that’s a daddy’s love for his little girl…’; while ‘Comeback’ is a reminder that God is a God of all comebacks, and thematically, this new song by John alludes and harkens back, intentionally or not, to Danny Gokey’s song ‘The Comeback’, about similar themes and topics. Nevertheless, this song by John is very much autobiographical, as this album in particular came from a season of uncertainty and disillusionment. ‘When God Says No’ reminds me so much of the songs ‘Yes’ and ‘Because God is Good’ way back in 2011, as John now gives us hope and comfort in this song, that when God says no, for whatever reason, we must trust that God has a bigger ‘yes’ down the track, even if we may not see it now. A song that feels like part 2 to these aforementioned songs, ‘When God Says No’ is arguably not just one of my favourites on Explosions of Light but one of my favourite John Waller songs…ever!

‘Good News’ features 7eventh Time Down frontman Mikey Howard as both John and Mikey thrive in this 3 minute duet- a song declaring God’s faithfulness, and that Him not leaving us, ever, is in fact, good news for everyone; while the album closes with piano prominent ‘Here’s My Yes’, a declaration by John to the Lord, declaring his devotion and servitude to the Lord, in light of what He has done for us. Though only piano (and a few string sections) to go with John’s passionate voice, the song itself is nevertheless a highlight. The oldest song (and hence the biggest standout on the album) is ‘I Choose You’, written by John and a few of his bandmates long time ago when John Waller was According To John (and then subsequently recorded by Point of Grace on their 2004 album). The song itself alludes to the fact that everyone worships something, whether they know it or not. The song boldly asserts that ‘…if everybody’s worshipping something, I choose You…’, a claim ought not to be sung lightly. Recorded in a light instrumentation vibe compared to the rousing atmosphere of Point of Grace’s version; John reminds us all, that often older songs are equally as poignant as newer ones.

John Waller’s first album in 3 years is one of the most pleasant surprise albums within the last few weeks. Even though John started off as signed to a label, he is now currently one of my favourite indie artists, alongside others like Audrey Assad and Kerrie Roberts (both also previously on labels). With heartfelt lyrics and vertical praise moments to bring out congregational worship, John’s heart for worship, family, adoption, hope and Christ is all evident within these 11 songs. Still singing with his distinct southern gospel sound, it is the acoustic nature of some of these songs on the album, alongside the rousing anthemic numbers, that makes this album unique as John brings in many listeners who may listen to a variety of music genres and styles. Despite the lack of promotion (aside from a press release sometime in December 2018, this album has quickly risen to become one of my favourite albums released in January 2019 (alongside Switchfoot’s NATIVE TONGUE). Well done John for such an inspired and enjoyable album, and one that’ll hopefully encourage us all to live a life worthy of what Christ longs- to be an explosion of light to whoever we meet!

3 songs to listen to: Awakening, Comeback, When God Says No