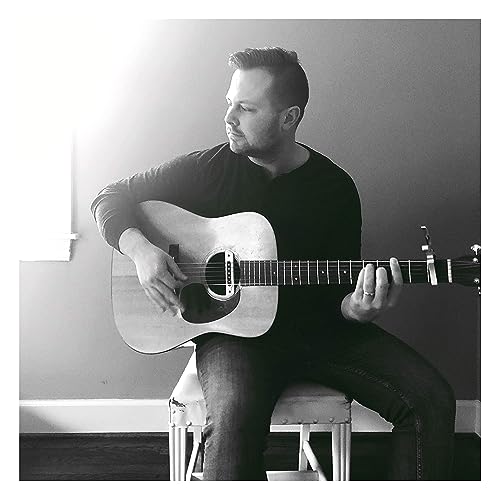 Extremely popular, and respected for his cover of the Erik Nieder hit single “Dead Man Walking”; John Tibbs, who previously was signed to Fair Trade Services a few years ago, released his brand new EP Heartland in 2017 (which you can read a review of here!)- which is an EP that is sure to inspire and encourage, as we remember that God is a God who won’t ever let us go, regardless of whether we think He should or not. John released the album through Pledgemusic as a platform (of which that crowdfunding site has now closed down!), and John’s sophomore project was quite compelling, comforting and confronting, while all the while enjoyable as well. With John also dropping the cover of Maren Morris’ “Dear Hate” last year, as well as a re-recording of “How Deep The Father’s Love For Us” and “Put A Little Love In Your Heart”- not to mention the brand new EP Wilder Years (read a review here!); the singer/songwriter and Americana/folksy artist has unveiled his all new EP Hymns From A Room this past week, as he continues to explore the world we live in and examine the human condition- this time through timeless worshipful songs of old.

Recreating the public domain traditional hymn songs of old is by no means an easy feat- for any artist. Because you have the purists, who believe that hymns shouldn’t be touched whatsoever- and then you have the fans of modern day style hymns (like “In Christ Alone” or “10 000 Reasons”) who reckon that hymns need to be updated once in a while. Just like how Chris Tomlin updated “Amazing Grace” with a catchy chorus that has now become engrained as part of folklore, and also just like how Chris Tomlin and Matt Redman changed the melody and added a resonating and stirring chorus to “The Wonderful Cross”; so too do other songs desperately need ‘modernising’, according to fans of newer styles of music. However for John Tibbs, who recorded his 5 hymns in a room with just an acoustic guitar (probably because of the fact that due to COVID-19 he must’ve thought that listeners would respond better to slower paced, more reflective or contemplative material!), he has gone the more traditional route, and recorded a bunch of hymns, with no added verses nor choruses. The result is tracks that are sombre and reflective of the times that we are living in- and though these songs aren’t upbeat, they still do resonate and encourage, as John dives deep into the promises of God and His love and faithfulness for us.

A while back ago, John Tibbs’ debut full length album in 2016 certainly lived up to the expectations placed upon it by the impressive EP in 2015, and in 2017, Heartland more than exceeded my expectations as well. Now this year with John’s EP Wilder Years, as well as this very hymns project, John’s stature as a formidable artist in today’s society is cemented. Definitely having me eager in anticipation for John’s future projects (a Christmas album would be nice!)- John’s presence and exposure to the CCM market this upcoming year is sure to be a good thing indeed, as he ministers to Christians and non-Christians alike with his honesty and relatable lyrics. So, are you intrigued by how Hymns From A Room sounds like, considering that these are some of the most timeless classics ever known to man? I would definitely encourage you to check out John’s music, as this is one of the most personal, honest and vulnerable collection of songs that I have heard this year!

3 songs to listen to: Because He Lives, It Is Well, Great Is Thy Faithfulness