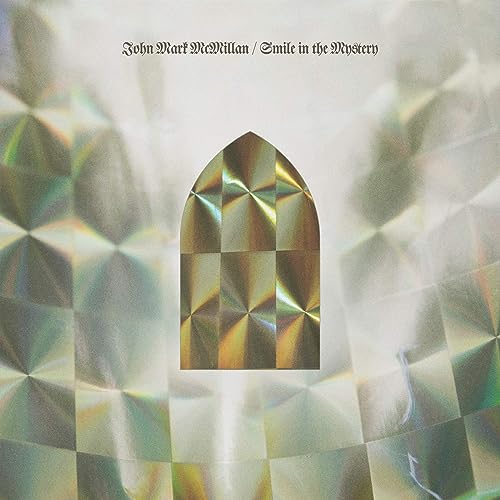 John Mark McMillan isn’t someone your mind immediately gravitates towards when you think of a worship artist. Sure, the guy wrote “How He Loves”, yet this track has been covered by David Crowder*Band and has since been linked with Crowder forever, for better or worse. Sure the guy wrote “King Of My Heart”, yet this track has been covered by Bethel Music and has been since linked with singer Steffany Gretzinger forever, for better or worse. Alas, John Mark hasn’t had any hits attributed to his name that are recognisable to the public. Is that the fault of the label for not signing him on a deal that gains him massive exposure? Or is it the fault of the listeners, for not actively searching his music and being amazed by such a brilliant songwriter he is (so I guess it’s my fault too!)? Maybe it’s neither, but John is definitely a victim of circumstances and how music is generally consumed. Radio airplay determines success, and I guess you’re only on radio if you’re signed to a major label. But the creative types like John Mark aren’t on radio often enough because most of these songs ‘go over people’s heads’ if you want to call it like that, my head included. Nonetheless, Spotify changes all of that, and with the release of John’s latest EP, the Christmas themed Smile In The Mystery, perhaps a new wave of fans, listeners and followers are coming soon for him.

“…hope is not always found in the most obvious places. Often significant things have ordinary beginnings and sometimes – in the middle of the night – the world changes quietly right under your nose. What does it tell us about God that Christ would be born not to kings, the affluent, nor the influential? What does this say of His thoughts on politics and power that His answer to the longing of humanity would be a helpless, homeless, baby boy? What is this cosmic kung fu exactly? What kind of chess is God playing here? This is the beautiful mystery of Advent, and it’s an idea I am searching out in my Christmas song “Baby Son.”…” Played out like a modern hymn, the EP opener “Baby Son” asks a lot of questions, and speaks about how God was born in a manger to a ‘lowly’ family instead of coming as a big, strong and mighty king ready to defeat the Roman Empire. With no simple answer to give other than ‘…the government now rests upon the shoulders of this Baby Son…’, we are assured time and time again by John that because Jesus was born as He was, it must be for a specific reason which at the time wasn’t known, and maybe we don’t know the reason now; but God will reveal the reason in His timing. A heartfelt and poignant opener that I’m sure will be sung in churches very soon (yep, even after Christmas!); “Baby Son” sets the tone for the rest of the album as we marvel and wonder at the presence of Jesus on this Earth and His mission and vision he longed the world to understand, in the somewhat unorthodox ways that He accomplished it.

The rest of the EP carry on from where “Baby Son” left off, with John powerfully declaring that Jesus is Lord through traditional Christmas carols, original melodies and exquisitely recorded covers. “Silver And Gold” is led by John’s wife Sarah, and isn’t sung in the usual ‘verse, chorus, verse, chorus, bridge, chorus’ way, but rather hymn refrains. Led by strings and keys, and slower in tempo, this ballad can sound a tad too slow, and at times could put anyone to sleep, however lyrically is spot on, as we are met with an earnest melody about appreciating the most important things in life, the things that will last forever, because we don’t know what will happen in the future.

In terms of traditional carols, “Silent Night” is meshed with the title track to create a beautiful and haunting medley of sorts, while John also covers “Joy To The World”, which musically doesn’t stray too far from other well known versions such as from Chris Tomlin, Steven Curtis Chapman, Francesca Battistelli and Pentatonix, but lyrically is altered a bit (the third verse is sung first!). The final all-original Christmas melody is “Lights”, as John passionately and fervently outlines that Jesus’ presence dwells with us forever, comparing Him and His love to lights on a Christmas tree that doesn’t burn out. While ‘non-Christmas-y’ covers “Make You Feel My Love” (Bob Dylan) and “What A Wonderful World” (Louis Armstrong) are the final tracks to be present on the EP, and though these additions are a bit weird at first glance, John puts a ‘musical Christmas’ twist on these melodies that makes them seem right at home on any holiday playlist.

To tell the truth, I’m not that knowledgeable of John Mark McMillan’s music, however this Christmas EP is quite strong- and I’d say that I can (and you could too!) possibly listen to these tracks all year long. This EP isn’t enough for me right now to check out the rest of John’s discography, however maybe I will in a few years’ time. For die hard John Mark McMillan fans, this release won’t be enough until the next project, but for the rest of us, it’s something a bit different, and proof that non-CCM Christian artists can make good music too!

3 songs to listen to: Baby Son, Silver And Gold, Lights