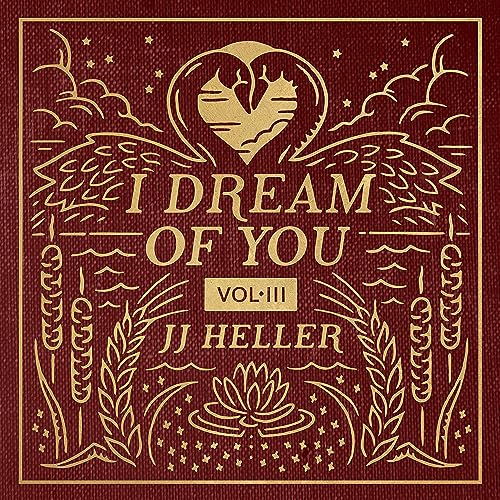 JJ Heller has been in and around the music industry for quite some time. Possibly the most unique, musically diverse and poignant female indie artist I’ve come across over the last few years, JJ has unveiled her fair share of poignant albums over the years- her 2015 gem and underrated album The Sound of a Living Heart, a successful Christmas album in Unto Us; as well as her successful 2013 album Loved which coined the radio singles ‘Who You Are’, ‘Redemption’ and the title track, alongside a lullaby album I Dream of You that included her famous track ‘Boat Song’. Now in 2021, JJ Heller is once again releasing a new album.

Since Unto Us in 2016 and I Dream of You Vol. 3 in 2021, has been a slew of singles released to iTunes (now Apple Music), alongside a follow-up album to I Dream of You– I Dream of You Vol. 2, songs that have made an impact on JJ as a kid and growing up, songs that of yesteryear that still have meaning now. In that album, reviewed by my brother Josh here, we saw songs like ‘Here Comes the Sun’, ‘Bridge Over Troubled Water’, ‘Edelweiss’, ‘Over the Rainbow’, ‘Moon River’ and ‘Make You Feel My Love’, and now in 2021, her release of I Dream of You: Vol. 3 is unveiled to digital platforms. With I Dream of You: Vol. 3 also an album full of covers, this is a must-have purchase (or at least a stream) if you’re a fan of JJ Heller’s music, a fan of timeless classic songs, or both. Or if you’re a fan of JJ’s mainstream counterparts like Jewel and Sarah McLachlan.

There’s nothing much to say about this album, in this ‘review’. Really, there’s nothing much. If you’re a fan of folk music; and enjoy songs of yesteryear and want to see those two things married together, then this album if for you. Even if you’re not really much of a fan of folk music, then this album can definitely change your mind- I believe it’s that good. Even if we don’t necessarily know all the original artists present here on this JJ album, we do know many of the songs, and this shows us the timelessness of these tracks, even being able to transcend the artist itself. Songs like ‘Everything I Do (I Do It For You)’ (Bryan Adams), ‘I’m A Believer’ (The Monkees), ‘In Your Eyes’ (Peter Gabriel), ‘Thinking Out Loud (Ed Sheeran), ‘Stand By Me (Ben E. King) and ‘I’m Gonna Be’ (The Proclaimers) are all songs that we may have heard in our lives at one point or another, and are all culminating on this album release from JJ, a reminder that songs indeed transcend the artist originally, as well as time period.

Much of these songs have stood the test of time, and for them to be reimagined again by JJ is enough for hopefully younger listeners to take note and listen to songs that defy the decades and pierce the heart for reasons inexplainable as we see songs impact and influence, years after they were written. An album that’s destined to become a go-to album to listen to for reflective music in a folk-pop fashion, JJ Heller is definitely underrated, and this album showcases the fact that sometimes, an album full of covers may not necessarily be a bad thing at all. Well done JJ for such a compelling album, and certainly one of my favourite covers albums by any artist, ever since the Best Of ___ compilations from CImorelli. Looking forward to I Dream of You: Vol. 4 later on next year sometime? Who knows! Till then, this album will be on repeat, for the upcoming weeks and possibly months to come!

3 songs to listen to: In Your Eyes, Everything I Do, Feels Like Home