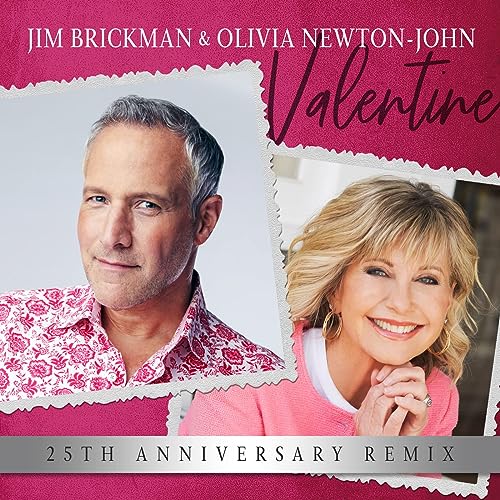 Olivia Newton-John died not too long ago. You can read all about it here, and I’m sure if you are alive right now and know anything there is to know about pop culture (or even just music), you’d know about Olivia’s passing. And while she’s no longer here with us, her songs still remain, and so I’d thought it be fitting to ‘review’ the last song she ever recorded- a new rendition of Jim Brickman’s ‘Valentine’- a song originally recorded with Martina McBride leading the vocals, way back in the 90s. Now re-recorded with Olivia, Jim Brickman offered up this ‘remix’ in February 2022…and little did anyone know, that this recording would be Olivia’s last. That’s what makes ‘Valentine’, at least this version, so bittersweet. While I will be discussing about Olivia in my blog series about iconic and identity-building artists, in an upcoming blog post at a later undetermined date; what I will say is this- Olivia was an icon, and it is incredibly sad that she’s not here on earth with us, any longer. ‘Valentine’ is her last parting gift with us all, so how does that compare…to the original ‘Valentine’, to her songs of before, to even songs from this year alone?

You probably already know what I’m going to be rating this song. Yep. 5/5. This post isn’t really too long, because why should it be? ‘Valentine’, this version, is just as good as Martina’s way back in the day, while the song in and of itself, still holds up, 25 years later. ‘Valentine’ also is very comparable to all of Olivia’s back catalogue (even though I don’t know much of Olivia’s material), while ‘Valentine’ the song competes very well with the songs of today. So…what more can I say? Except that we as a people will miss Olivia, far more than we would even care to admit. We have lost an Australian icon, and soon, we’d have to say goodbye to more and more, people that we wouldn’t even have thought could die when they do. Olivia’s death has taught us all one thing- that life is short, and that songs of yesterday can impact, years upon years later. Who are we now, to argue- which decade of music is the ‘best’? Just enjoy the music. Be inspired, encouraged, and motivated by music, regardless of the decade and genre. And in listening to ‘Valentine’, I’m amazed at how a song from the 90s can still give us hope and encouragement now. Jim Brickman’s song is definitely one of the classics. It’s a track that has defined the 90s; and will continue to define the 90s in decades to come. And it’s certainly fitting for Olivia’s last song, to be ‘Valentine’. Well done Olivia for this last musical offering. Hoping and praying that the Lord uses the song for His glory (and our own good) in the upcoming weeks, months and even years ahead.