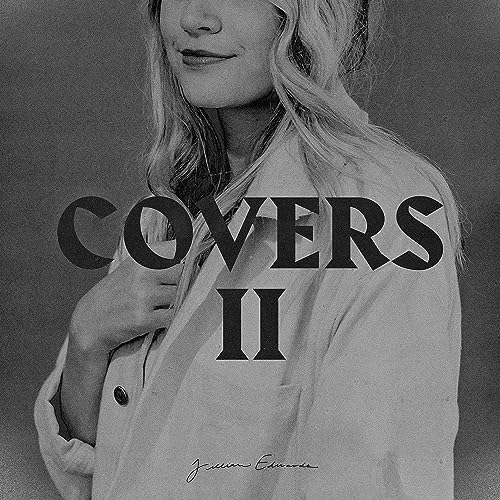 Jillian Anita Chapman. Professionally known as Jillian Edwards. An American singer-songwriter primarily drawing from the genres and musical realms of indie folk/pop. Wife of Will Chapman, who’s 1/3rd of indie band Colony House, and son of CCM powerhouse singer-songwriter Steven Curtis Chapman. Jillian’s career thus far has included a myriad of EP’s- her most recent EPs being Meadow in 2020; and Let Not Your Heart Be Troubled in 2021- Meadow was actually reviewed for the site, here. With Jillian being one such singer-songwriter to look out for in the upcoming years ahead; she’s been on the music scene since 2009, with her powerful melodies and vocals reminding me of artists like Ellie Holcomb, Bethany Dillon, or Lindsay McCaul, which is why I believe her 2 most recent EPs are some of the most powerful and impactful out-of-left-field Christian album releases in recent memory. Now in 2022, Jillian has unveiled to us something ‘new’- Covers II, a sequel to Covers way back in 2016. A must if you love cover music or just Jillian’s voice, full stop; this singer-songwriter is mature lyrically and musically beyond her years, making this release (albeit just covers), one of 2022’s best kept secrets to date. Using her ethereal voice and acoustic guitars and keyboards to bring these covers to life so that they are to be enjoyed by lovers of CCM, mainstream or both; this new set of songs is a reminder of her ever-present and constant faith that she has, expressing her own beliefs (through songs like ‘Beautiful Day’ and ‘What a Wonderful World’) in a way that I’m sure even non-believers can enjoy this type of music and not feel threatened, in a way. Covers II is a great way to begin a lazy day if you’re not working, an EP to add to your collection of Jillian Edwards songs to play on the weekend, and a reminder that covers doesn’t always have to follow the same format all the time (‘What a Wonderful World’ is pretty unique).

Covers was unveiled way back in 2016, and though Covers II is only 5 songs, the power and intensity delivered by Jillian through these five tracks, is not lost on her, despite there being a 6 year gap between cover projects. With covers of songs by artists like Leona Lewis, U2, The Temper Trap, Louis Armstrong & The Beatles themselves, Jillian delivers each song with such an ethereal and joyful disposition that you can’t help but enjoy them and sometimes even think that you listening to something new and undiscovered, even though they are covers. Songs especially like ‘Beautiful Day’ and ‘Bleeding Love’ are given reflective-like treatments, while ‘What a Wonderful World’ is presented with a sense of upbeat urgency, creating a quasi-new song in the process (which is good for people to be drawn to the song, even if they don’t know Louis Armstrong in the original).

Jillian on the whole has presented this 5-song set with such passion and vigour, hope and encouragement, that it doesn’t matter that these songs are ‘mainstream’- the Lord will speak through them, just the same. The EP is definitely worth the listen and purchase (if you enjoy artists like Bethany Dillon or Sixpence None the Richer). Highlighting the singer-songwriter/acoustic genre that can often be different and therefore shunned compared to the relatively popular ‘pop’; these songs are delivered from an honest, transparent, and heartfelt individual. Jillian’s work is often overlooked and underappreciated- nevertheless, Meadow, Let Not Your Heart Be Troubled and now Covers II has given me hope that her songs can at least reach whomever I believe God wants to reach in the upcoming years ahead. Jillian’s career from 2009 has, in my opinion, reached a point where her music is certain to bring her to newer heights with songs that showcase her central faith and her assuredly firm stance on her beliefs and where the stands with the creator, regardless of what happens through the circumstances in the midst of the created. Well done Jillian for such a powerful and heartfelt EP. Can Covers III come sooner than we think? I hope so. Only time will tell.