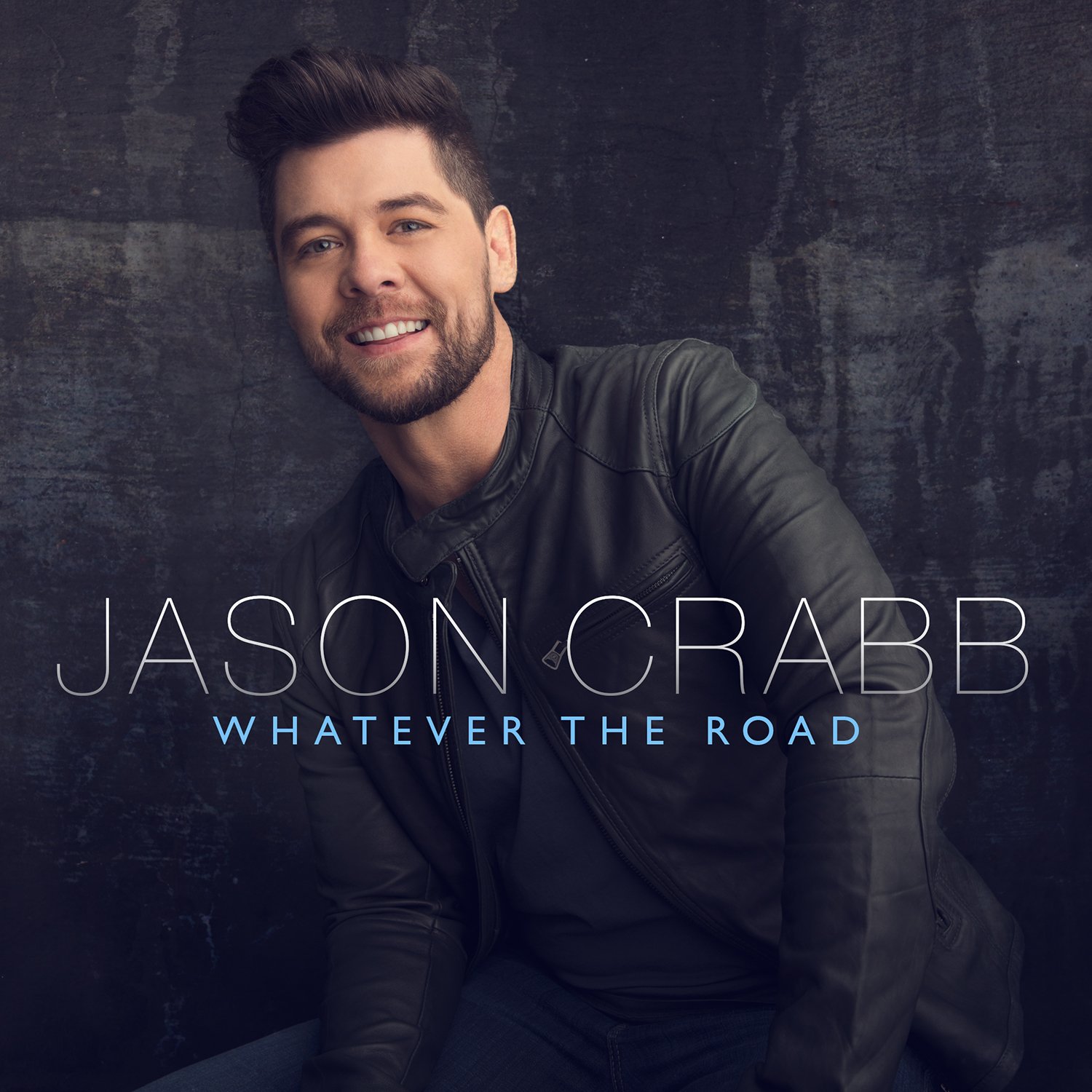 ‘…you have to reach in deeper places to write music, and with song writing you have to stay there for a little bit… I’ve never wanted to be pigeon-holed. I just wanted to make music. I finally found that if you’re part of the creative process of the song, then it becomes you. With this record, I feel like it’s a little more of who I am than what I’ve been. It’s where I want to be and it’s wonderful…’ Jason Crabb. Everyone knows him, even if you haven’t listened to a single note of southern gospel/country before. Even if you have never listened to The Crabb Family, or even Jason’s earlier solo music, the name Jason Crabb is a name that many have heard of before, even if they have never heard a song from this southern gospel great. Now with his Reunion Records CCM label debut, Whatever The Road is an album where Jason breaks out of the mould of southern gospel/country that he was unfortunately pigeon-holed into for a fair amount of his career until now. Produced by One Sonic Society members Jason Ingram and Paul Mabury, Jason’s new album is something of a much more mature way of recording for Jason, as he continues to break down musical boundaries between country/gospel and CCM, between Christian music and mainstream. Singing his new single “He Knows What He’s Doing” at the Grand Ole Opry (a music induction primarily for Country musicians), Jason continues to make music that is groundbreaking, and Whatever the Road is no exception. While at times it can seem too CCM-esque, the power of Jason’s voice alone does enough to combat the downsides in an album certain to be a standout in September 2015!

“He Knows What He’s Doing”, the first radio single from the album, is arguably one of Jason’s most passionate and enthusiastic songs he’s ever recorded, possibly even on par stylistically and emotionally with “Love Was Stronger” and “Near” from his previous 2013 album. A song sung because of a hardship in Jason’s life, where his friend’s wife passed, this is a melody hopefully bringing comfort to people in hardship and despair. Jason gave the demo of the track to his friend, and while I do not know whether it was accepted positively or not, the fact of the matter remains, that God knows what He’s doing, even during the moments where we don’t even see His hand. The chorus lyric is as compelling as ever, and as Jason declares that ‘…if I had it my way, I’d take this from you, but God, He knows what He’s doing…’ we see the conundrum we can face as humans- trying to fix situations or being at peace with it knowing that God has it fully under control. Giving up control and laying it all in God’s hands can be difficult; yet this song is an encouragement to do just that- because God does in fact know what He’s doing!

Originally written by Kristian Stanfill, worship leader who is part of the Passion Conferences youth and young adult movement; “Never Gonna Let Me Go” departs from the straight-out worship melody that was recorded by Kristian and is made unique by Jason by adding in slide electric guitars and a country worship vibe a la Rhett Walker or Third Day. Yet the message is still the same and unwavering- that ‘…His love [is] breaking through my heart of stone, love breathing to awake my bones, love reaching out to save my soul, love never gonna let me go…’ While it is interesting for a southern gospel/country artist like Jason Crabb to cover a straight out worship melody, what he has done with “Never Gonna Let Me Go” is commendable, and in fact, on par in terms of enjoyability, maybe even more so, than the original. “Chance For a Miracle”; another melody to debut, this time in video format, before the album release; is an encouragement to many stuck in a moment of despair. With Jason using the phrase ‘chance for a miracle’ as a reminder to us that God gives us little miracles each day, and that every day is an opportunity to seek out what He wants for us to pursue in our everyday lives; it is in songs as emotional as these that Jason’s vocals shine. Emotion and poignancy is developed and expressed quite powerfully in this track, and while not necessarily as catchy as both “Never Gonna Let Me Go” and “He Knows What He’s Doing”; Jason still does a great job in conveying the truth about miracles, and the occurrence of them in everyday life.

Following on from the aforementioned three is “If I Shout”, a song, though absurdly titled (tell me, from first glance, what do you think about when you see a song called “If I Shout”), is a song poignantly sung and emotively performed as Jason delivers one of the most passionate vocal deliveries out of any song recorded on this album. A song that encourages us to shout and declare to everybody the change within us as we shout ‘…from a heart that’s been washed clean…from a past that’s been redeemed…’, “If I Shout” is one of my personal favourites, if not the favourite, from this collection of ten tracks.

“He Won’t Leave You There”, another piano friendly melody full of honesty and inspiration, is a song for the person in the valley, as Jason encourages us all with the words of how ‘…I can tell you there is something you can lean on, it’s a promise that won’t bend and it won’t break, it will keep you when the future is uncertain, you’re not out of grace…’ While the song, as like any song ever written, doesn’t give us clear answers of why we’re in the valley sometimes, it does provide us with the comfort that Christ won’t leave us in our despair and suffering, but rather will walk beside us during our loneliness, shaping us to rely more on Him as we are encouraged to always walk with our Father, even and especially during the difficult and uncertain times of our lives.

“Home”, a song very special to Jason personally, was recorded around the same time his maternal grandmother passed. Written by his own father, this song is as poignant to followers of The Crabb Family as it is personal to Jason himself. Reminding himself of his grandmother every time he sings it, “Home” ought to remind us all of the nostalgia moments of our own childhood, and understand that this life isn’t our final destination, that our home, with Christ, is not yet. Living here and now yet longing for what is to come (forever) can be living in a tension, yet God continues to give us grace to handle such tension as the years go by. Buoyancy and joyfulness come in the form of 3:35 minute melody “It’s a Good Life”, a song starting with a light pulsating drum beat that begins a melody full of life and a message of treasuring each moment of the life we have with the people we surround ourselves with; while “This Life For You” presents the acoustic guitar as the forefront instrument in a song that is a clear prompting that we live this life for Jesus when everything comes down to it and it is all stripped away. As catchy as any song influenced by Irish or Celtic music, “This Life For You”, though probably won’t be as popular as songs like “He Knows What He’s Doing” or “Chance For a Miracle”, is nevertheless a favourite of mine, alongside “If I Shout”.

“Opened Up My Eyes” and “Mysterious Ways” are the remaining two melodies on Whatever The Road, and while each of them are musically poles apart, the theme that surrounds these last two songs can’t be more similar than they already are. A gospel/worship song (“Opened Up My Eyes”) that has vocals reminiscent of someone like Rhett Walker and a message of how Christ opens our eyes to the spiritual realm as we are given a purpose only we can work through in our lives, compared to a straight out country track (“Mysterious Ways”) that emphasises the fact that God works in ways unimaginable and unfathomable to man; both these songs are great endings to an album full of unique genres colliding to present to us a man who is quite possibly one of the most versatile, musically and vocally, compared to any male vocalist I have heard within the Christian music industry in the last decade or so. And with encouraging lyrics like ‘…You are strong, the tower of strength I need, You’ve opened up my eyes to see…’ (“Opened Up My Eyes”) and how ‘…I’ve seen some crazy things…stuff that shouldn’t have happened in the natural…didn’t make sense…’ (“Mysterious Ways”), Jason continues to affirm his place as one of the most encouraging male vocalists Christian music has ever seen, ever since gospel CCM legend Carman and his contemporaries Michael W. Smith and Steven Curtis Chapman all those years ago!

‘…I just want to encourage people and give them hope. The album is titled Whatever The Road, and I want people to know that whichever direction or whatever road you’re headed down, God is going to walk with you…’ His first album on Reunion Records, Jason is anything but new to an industry full of passion, promise and poignancy as his presence is an added plus to an industry somewhat lacking of artists who pursue artistry above radio success. Whatever the Road is an example of an album that reminds us all what good quality singing is all about, and what it means production-wise to have the likes of Paul Mabury and Jason Ingram helping with an album. Full of heart, honesty and hope, songs from “He Knows What He’s Doing” and “If I Shout” to “Chance for a Miracle” and “Never Gonna Let Me Go” are such that give us a reminder of the artistic integrity Jason represents. One of my favourite albums in September 2015 so far, well done Jason for such an inspirational album. Can’t wait to album #2 on Reunion Records, whenever that arises!

3 song to listen to: If I Shout, This Life For You, He Knows What He’s Doing