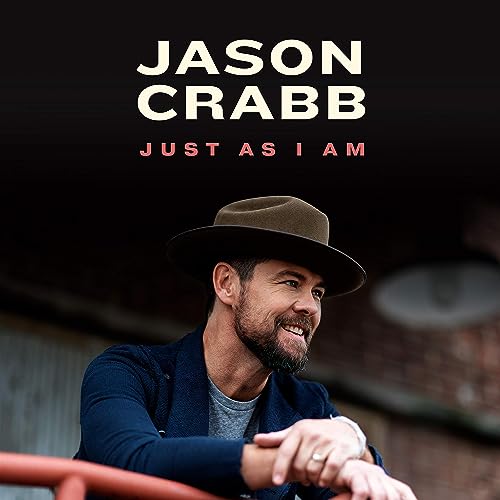 Jason Crabb– Just As I Am (Amazon mp3/iTunes)

Jason Crabb, the high profile and respected southern gospel singer, who expanded his niche market and music genre into CCM in 2015 with the much popular and loved Reunion Records debut album Whatever The Road; came back to his roots with the 2018 project Unexpected; released by Daywind Records. True to the album title, the record really was and still is unexpected, as I never heard of the development and recording of a brand-new album from Jason, however this out-of-the-box album was surprising in a very good way. Though Jason has become famous throughout the years via recording southern gospel as part of The Crabb Family (from 1996-2007), and seemingly departed from gospel to record CCM in 2015; this new project married the best of both worlds, as we were blessed to hear in my opinion Jason’s strongest and most cohesive project to date. Featuring a couple of power ballad anthem duets with Gary LeVox (“You Chose To Be My Friend”) and Kaya Jones (“Let It Be Love”) (which are a couple of my personal album favourites) as well as a cover written by Michael Boggs (“Short Are The Years”); Unexpected faithfully encapsulated a wide variety of genres, and still inexplicably sounds like Jason Crabb, so I guess for all of you guys who love southern gospel, you don’t have to be afraid or apprehensive of this new project. And even if you haven’t listened to gospel or country before, or The Crabb Family, or Jason’s previous solo work, Unexpected is well worth a listen, as we discover some well thought out melodies and praise Jesus because of who He is! Coming back to his roots in southern gospel, while maintaining his newfound love of CCM, Jason’s efforts in Unexpected need to be commended!

Yet we’re not here to talk about Unexpected. In fact, you can read that review here… but now it’s time to listen and voice our opinions on Jason’s latest single and Red Street Records debut “Just As I Am”. Not the respected and widely renown hymn but rather a new song, this radio friendly pop tune with shades of country, worship and gospel infused; we are met with one of my favourite songs of 2021 (the year is still young but I have high hopes this song will stay there near the top of my list!). Pop and CCM through and through, “Just As I Am” has a 90’s feel and a Rascal Flatts feel and an old school Steven Curtis Chapman feel. There’s a nostalgia here in a good way, and if this is the song that Jason uses to market his upcoming new album, then I’m all here for it! As Jason eloquently and ardently relays to us that ‘…just as I am, in the good and the bad, You still understand, and You never stopped loving me just as I am, with the heart of the Father, and grace like no other You never stopped loving me, just as I am…’, we are truly glimpsed into the heart of the Father, and into the heart of the One who love us unconditionally. This track is a prayer of gratitude, especially with the simple yet earnest bridge that declares to God ‘…thank you for loving me…’; and as we remember God’s faithfulness, we are also delivered a song to saviour and to whet our appetites for when Jason unveils something else new!

As the official follow-up to Jason Crabb’s Unexpected; Jason is anything but new to the CCM industry, and he has shown us once again his durability, and versatility as an artist, as well as his undeniable passion for Jesus. “Just As I Am” may not be a countyr song or a southern gospel song… but time and time again, Jason has shown us his ability to adapt. “Just As I Am” may not be as punchy or breathtaking right off the bat, however it nevertheless shows us that this track , like “He Knows What He’s Doing”, will be durable and timeless in the future, given that Jason is singing about eternal biblical truths, and also because Jason creates such a powerful presence vocally no matter what he sings. With Jason on this album excelling at almost all aspects; “Just As I Am” is a release that we all need to listen to, to be reminded of the everlasting power of Jesus’ love. Well done Jason for such a lyrically strong melody. Can’t wait for the next full-length studio album of all original songs, whenever that arises!