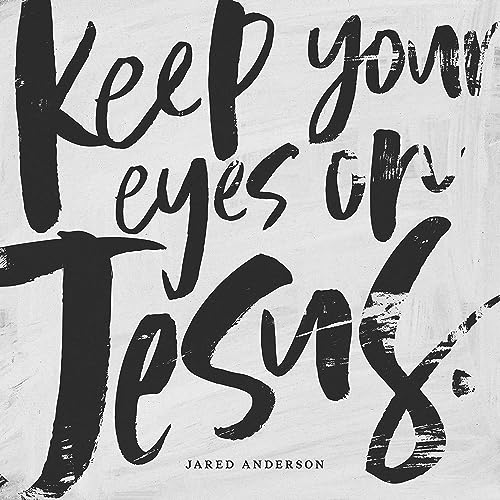 Previously signed to Integrity Music and Centricity Music, worship leader and songwriter Jared Anderson is an artist whom I recently discovered a few years ago, even though Jared has released many albums for the past 15 years! It’s a fact I have remedied hastily and to great appreciation over the past few years, as I have come to love many, many songs and the entire body of work from the artist known for his popular worship hits such as “Great I Am”, “I Am Free”, “The King Is Coming”, “Pouring It Out For You” and “Amazed”. Having just started to be an independent artist again, Jared, after a mini-hiatus, is stepping out once again, recently delivering to us his brand new single “Keep Your Eyes On Jesus”. And while on the surface this track is quite CCM-ish and poppy, and probably won’t compare to his earlier material; there’s no denying the passion and heart for Jesus, that still keeps me engaged and captivated. Marking the beginning of the next musical step in his already successful and inspiring career, Jared has delivered a hopeful and poignant tune that distinguishes his expansion in musical direction, and a stance I am gladly welcoming. So let’s see how “Keep Your Eyes On Jesus” motivates, encourages, and draws us closer into communion and worship with God.

Just under 4 minutes, the heartfelt motivational encourager features Jared against a piano driven pop backdrop singing to a friend or his children or his spouse, and letting them know that they can keep their eyes on Jesus during times of trials, tribulation and stress. We don’t have to go through life alone, and that’s the crux of this song; there’s Someone who can and will help us if we would only ask Him. It’s a noble way to deliver a track, and Jared gets 10 points for effort, however there’s been so much more compelling, powerful and high-octane tunes this year- so much so that Jared’s song is unfortunately lost in the shuffle. It’s not that it’s not good- but it’s that other songs are more ‘wow’.

Though the radio friendly pop ballad is a joy to listen to and re-listen to; Jared Anderson’s “Keep Your Eyes On Jesus on the whole doesn’t wow me and grab me like other hit singles this year like “You Cannot Be Stopped” (Chris Quilala and Phil Wickham) and “Greater Than My Regrets” (Tenth Avenue North) to name a few. However the track has done enough for me to be fully anticipating Jared’s full length upcoming album…whenever that may be. So should you listen to Jared’s latest song? Most definitely- yet even though other artists may overshadow Jared in terms of lyrics, music and grandness; Jared should be proud of his release, and in time, listeners will love this song too! Well done Jared, I can’t wait to hear more of your music from this next chapter in your music career!