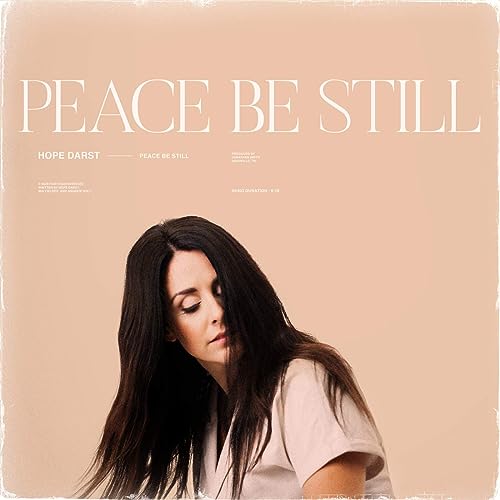 Recently signed to Fair Trade Services, Hope Darst is a newish artist. But she’s also a veteran as well. Confused? Well you see, Hope has been a songwriter and worship leader for The Belonging Co recently, but prior to that, she has been traveling the world for a great number of years- actually over a decade leading worship with Women of Faith, Every Nation Ministries, Christ for All Nations and many more organisations. In 2010 Hope even released a 4 song EP (featuring Hillsong Worship’s smash hit “You’ll Come”), which has now been removed from the internet. Yet today, Hope is back after a 10 year absence- this time with her brand new single “Peace Be Still”.

Written with Andrew Holt and Mia Fieldes, and previously recorded by Lauren Daigle for The Belonging Co’s debut album in 2017; “Peace Be Still” was written at a time when all three songwriters were feeling anxious, fearful and like their lives weren’t in control. As Hope expertly puts in in the below ‘story behind the song’ video, the song came about because these songwriters were just catching up, found out they were each feeling a similar feeling, and decided to write the opposite- to sing their way through the storm and through their troubles. Writing and singing about peace when the world they knew was upside down is quite a wacky concept. But as evident in the song and how strong it is lyrically and musically in my opinion, “Peace Be Still” is a winner!

It isn’t known whether Hope Darst will continue to write and sing songs as a solo artist, and release a solo full length album. Or will she continue to be at the Belonging Co. and this song was just a one-off? Only time will tell, but for now, definitely listen to this track. No doubt you’ll be blessed. And if you’ve listened to the version with Lauren Daigle, then…listen to this one! You’ll definitely gain something from this rendition, and you’ll definitely be closer to God as a result as well! Well done Hope for this modern worship anthem, and may God richly bless you with abundance in 2020 and beyond!