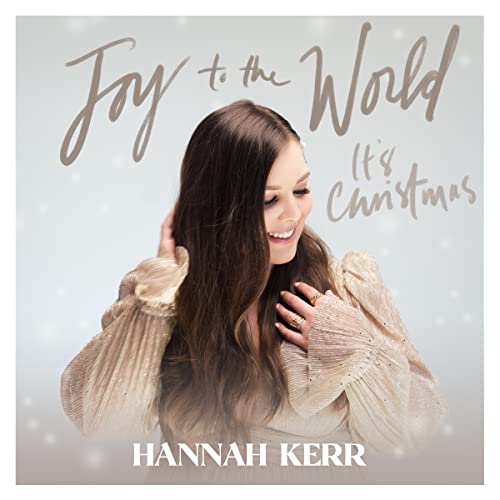 I’ve said this before but I will still firmly say it again- Hannah Kerr is one of today’s most underrated CCM/worship artists in my opinion. Even though her 2016 debut album Overflow (which we reviewed here!) garnered hits such as “I Stand Here”, “Undivided”, “Warrior” and “Radiate” to name a few, Hannah’s name isn’t recognised still. Though at 25 years old, she still has enough time on her hands to forge a following and a big enough fan base in the future for her to be more well-known. The fact that Hannah now is related to Tae from country duo Maddie & Tae through her brother marrying Tae in 2020… well, I’m sure that’ll boost Hannah’s star power, don’t you reckon? Yet even though Hannah is underrated, it doesn’t mean her music is by any means second-rate. In fact, I would say that you guys all should watch out for Hannah- because, she has released an EP in 2019, that is heartfelt as it is honest, personal and emotional (read our review of Listen More here!)… while Hannah has since unveiled her brand new inspirational single “Same God” to digital outlets. Hannah also revealed her single “Grave” in 2021, while she also dropped an expanded version of her Christmas album Christmas Eve In Bethlehem. And now that it’s time for Christmas Eve tomorrow, let’s be immersed in Hannah’s latest release, shall we?

Released as a 3-song single, Joy To The World (It’s Christmas) starts off with the title track. It’s a modern twist of the traditional Christmas carol, and features Hannah delivering a worshipful chorus and a jazzy atmosphere that really accentuates Hannah’s smooth vocals and pristine songwriting- as Hannah sings out ‘…we’re singing joy to the lonely, joy when it’s hard to come by, joy like a river that never runs dry, joy for the ages, joy in the morning sunrise, joy ’cause it’s Christmas, He’s with us, He’s given us this joy…’, I can’t help but passionately echo the same sentiments in praise to our Father as well! The fun-filled track “Sleigh Ride” and the reflective, mellow and contemplative piano ballad “I’ll Be Home For Christmas” round out the short-but-punchy holiday EP; as Hannah once again shows off her vocals and creatively and skillfully reminds us why she is one of today’s most emotive and powerful CCM artists!

Hannah Kerr’s introduction into CCM in 2016 with her debut 11 song project is nothing short of poignant and heartfelt. With her musical style similar somewhat to Casting Crowns in quite possibly every way, it is nonetheless her fervent enthusiasm and passion for the Kingdom, that will definitely propel her to new heights in months to come. With this Christmas EP being one of my favourite holiday releases of the year thus far; any fan of worship music, jazz music, holiday tunes and/or CCM will love this new track, and will also be eagerly anticipating Hannah’s brand-new album to be released at a later date. Well done Hannah for such an encouraging and compelling collection of songs. Already looking forward to the next release, be it another single or an EP or a full-length album, whenever it arises.