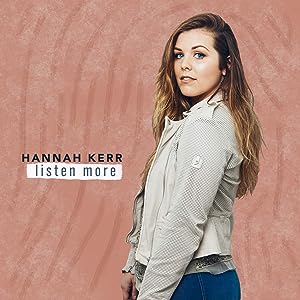 Hannah Kerr has been in and around the music industry for quite some time. From bursting onto the scene as an 18 year old releasing her first EP titled I Stand Here in 2015, featuring the single ‘I Stand Here’, to releasing her full length studio album Overflow in 2016, that birthed standout songs and singles like ‘Undivided’, ‘Warrior’, ‘Radiate’ as well as Matt Maher radio single and fan favourite ‘Your Love Defends Me’; we have been blessed to hear and witness this young woman of God forge a way forward in delivering a sonic space where worship and CCM radio pop can collide and collide well to showcase a discography that’s worthy enough to sit up and take notice. While still not as popular or even recognisable as many other seasoned veterans in the industry for quite some time, Hannah’s fervent honesty and passion to showcase music and songs that speak to our souls is what I reckon will continue to be her great asset both now and into the future. Now here we are in 2019, and after a successful debut solo album, as well as her first debut Christmas album that was unveiled to us late last year, we see yet another offering by Hannah- a 6 song EP titled Listen More, that features radio singles ‘Glimpse’ and ‘Split the Sea’, both released publicly digitally late last year.

It has been three years since Overflow and between 2016 till now, Hannah’s released a Christmas album, alongside a couple of radio singles ‘Glimpse’ and ‘Split the Sea’, both present on this EP. And while the EP lacks in terms of songs- being an EP instead of a full-length album, Hannah makes up for it all the more with powerful lyrics and heartfelt messages that makes this EP arguably one of my favourites of the entire year thus far. Released mid-2018, ‘Glimpse’, co-written with Matt Hammitt and Riley Friesen, is led by the strings as Hannah invites us all to ponder and understand that what we have seen of Jesus and experienced in our lives because of His presence, is just a glimpse of what we are to understand and know from Him, and what He has in store for us, both in this life and the next. A reminder that the love received by our Father, and the miracles and signs we see here in this life is just a glimpse into what He Himself is capable of, we are to be rest assured that ‘…I’ve only seen a glimpse, all I’ve had are moments, it’s enough, oh, it’s enough, I can’t see it all, but the mystery is holy, and I know, there is so much more than this…’ The glimpses that we see of our Lord in action and the wonder and beauty around us ought to be enough to declare and praise Him, something that quite often, we may not undertake and just plain do, for whatever reason. ‘Split the Sea’, co-written with Jeff Pardo and Blake NeeSmith of Finding Favour; the other pre-release track unveiled to us prior to the EP, shows us more of a real-life example and application to our own lives as Hannah delves into the story of Moses splitting the sea in Exodus and how if it was done back then, then surely the God of the Israelites who is the same God now can split the metaphorical seas in our own personal lives- some more treacherous and dangerous than others. As Hannah unveils herself about the background of the song, ‘…for the first time in my life I was asking pretty big questions like, who am I? What am I supposed to do? Who is God to me? What I really need to know today is that God can still split the sea. I need to be reminded that He’s the same God regardless of if my circumstances change…I had to sing it before I could really own it. But now after coming out of that season and being reminded continually of God’s kindness and His power and His steadfastness, I can look at that and say that declaration led me into the belief. ’Split the Sea’ was a declaration over my own life for two years…’

Throughout the rest of the EP, we see a plethora of themes brought to the fore as Hannah reminds us of the things that often everyday life seem to sweep under the rug. ‘Listen More’ the title track comes from a place of being still and listening to the Lord speak, often hearing during the moments that are often touted the most chaotic, while ‘In the Meantime’ is quite possibly one of the most vulnerable and heartfelt Hannah Kerr songs ever. A song to be for the ‘in the meantime’ moments, similar in theme to Lindsay McCaul’s ‘In Between’, we are met with a melody that allows us all to voice the thoughts inside our heads, as we wonder that the bits in-between point A and B count for anything, if God is even active and present during the waiting moments. As Hannah powerfully explains, not just about this song but about the EP in general, ‘…each song is kind of a window into a different area of my heart or my life. We all are complex people. I’m not just ‘confident Hannah’ and I’m not just ‘insecure Hannah,’ but both of those parts of me are coming into this project, and I think that’s exactly how God made me to be…I’m not fixed yet, my life isn’t perfect yet, but in the meantime, God is still moving, and I still trust Him…’ The EP is then rounded out with songs ‘Ordinary’ and ‘Simple’, the former being a song that allows us to see the Lord showing up and giving us opportunities to shine a light during the ordinary and mundane moments of our everyday ‘boring’ life, while ‘Simple’ encourages us all to break down what we know of the Lord to the simple truths and facts- that His love and grace is in fact so unfathomable and cuts deep to our hearts, and that the heart of everything, His unconditional and never-ending love ought to be enough for us to keep staying by Him faithful till the end.

‘…that vulnerability comes with being more confident in who I am and being more confident in who God is, that God can handle the messy parts of me, and God can handle all of me. I don’t just have to show Him the best parts or the pretty parts, but I can show Him everything…at the end of the day, this really is a ministry, I’m not trying to just throw music at people and hope it sticks. I really want this to be something that sparks conversation and will let people know that I’m willing to talk about the things that I’ve been through, and I want to hear what they’ve been through…’  With one of the most emotive and well thought-out EP’s I’ve heard in 2019 thus far, Hannah’s passion to deliver music with purpose and heart while still forging a way ahead in her own university degree, this young woman of God is fast becoming an artist who is one of the most honest worship leaders this generation has seen. While only standing at 6 songs long, this short EP nevertheless delivers all the anthems and heart-tugging moments, as this new offering from Hannah is a must if you are a fan of similar styled artists, like Meredith Andrews, Lindsay McCaul and Kari Jobe, to name a few. Well done Hannah for such a Spirit-filled set of 6 songs, can’t wait for the new full-length album, whenever that arises.

3 songs to listen to: In the Meantime, Glimpse, Listen More