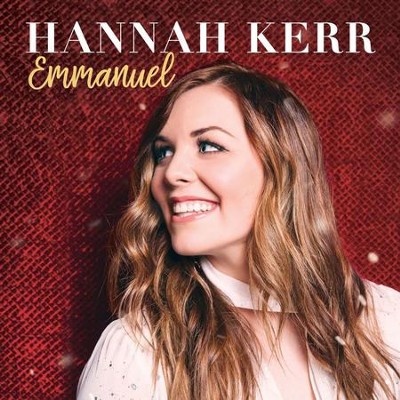 2016 and 2017 were great years for new artists who were having their start within the CCM industry. From We are Messengers, Hollyn, Zach Williams, Tauren Wells, Urban Rescue, Hillary Scott and Stars Go Dim, to Micah Tyler, Grayson Reed, For All Seasons, John Tibbs, Carmen Justice and TRALA; we have been blessed over the last few years to hear some talented musicians, some far more talented beyond their years, as we lay witness to some of the last few years most underrated, heartfelt and emotive songs we’ve heard. And now we hear another such artist again bring something new to the table for us to hear- Hannah Kerr, who first unveiled her EP I Stand Here way back in October 2015, and then went on to release Overflow in 2016 (without much buzz or even promotion…I even didn’t know Hannah was releasing a full length album until she did). Nevertheless, her debut album in 2016 was possibly one of 2016’s unexpected album releases of the year (alongside Zach Williams’ Chain Breaker EP– the unexpected EP of 2016). What Hannah has that can be set apart compared to other up-and-coming artists is emotion and passion far beyond her years. Only in her early 20s, Hannah comes across with a sense of grounded maturity, as the songs on not only Radiate but also this new Christmas EP (full of originally written songs and carols as well) bring to listeners a moment of reflection and realisation as Hannah as an artist is quite possibly one of my favourite to have emerged within the last few years (alongside Zach Williams, Hollyn, We are Messengers and Grayson Reed!).

Fast forward to 2017- Hannah has been within the industry for a couple of years or so, and since it is October, what do we see? Yes, a Christmas EP from Hannah, of course! And while at times  reckon it could be a little too early to see a Christmas offering within a new artist’s music release catalogue, what Hannah nevertheless brings within these 6 songs for the holiday season, is that of hope, peace, comfort and melodies that remind me of a modern day Christmas hymn, as these tracks released through Black River Christian (a rebranding of M2T Records) have me on the edge of my seat, enjoying Hannah’s vocals and enthusiasm, wanting more as I finish off track #6. Still, Hannah may have a while yet until album #2 releases (with the success of songs like ‘Radiate’ and ‘Warrior’ from her first album release), which is ok. Her Christmas EP is enough for us to be tied over, expecting great things from this young woman of God. Perhaps one of my favourite female vocalists in recent years, maybe, just maybe, Hannah could follow in the footsteps and become either the next Meredith Andrews or Francesca Battistelli in the future?

Comprising of 6 songs, Hannah’s collection of Christmas melodies are seemingly divided down the middle- 6 carols (‘White Christmas’, ‘O Come, O Come Emmanuel’ and ‘Have Yourself a Merry Little Christmas’), 1 cover (‘Breath of Heaven’- originally by Amy Grant) and 2 originally written songs (‘Emmanuel’, ‘Christmas Eve in Bethlehem’), and as we hear this mini-album, we can’t help but be enthralled and awed at the calibre of her vocals and the passion and enthusiasm that comes through on each track. Starting with a song that is as familiar as it is fun, ‘White Christmas’ may only be applicable and relatable for anyone who does live in the Northern Hemisphere, but even I find myself enjoying a song like this. While not about Jesus’ birth at all, the song is about longing to enjoy a Christmas in the snow, to be surrounded by friends and family and to experience a Christmas only seen in movies and TV shows. Featuring a double bass, light acoustics and a heavy piano presence a la the 1950s or 1960s era of Christmas music, Hannah harkens back to when Christmas songs were more focused on the moment of delivery and the message behind the songs, rather than the arrangements today where sadly, it’s much more about theatrics more than anything else.

‘O Come, O Come Emmanuel’ is the only Christ-centred carol on the EP (maybe Hannah’s favourite?) and is quickened to a pace that seems to be unrecognisable when the song starts. Nevertheless, the quickened pace of the song doesn’t deter from the passion that Hannah brings, as we are met with the fervent and urgent words of how we are to ‘…rejoice, rejoice, Emmanuel, has come for thee, o Israel…’ ‘Have Yourself a Merry Little Christmas’ is the remaining carol covered by Hannah on this EP, and is heavily jazz-influenced as this song, standing at near to 5 minutes, features a heavy piano undertone alongside light string instruments to create a 1960s café-style Christmas music atmosphere. As Hannah states herself about the background of the composition of this track, ‘…I asked a bunch of fans on my Facebook page to vote for which Christmas song I should cover, and this was the winner! I decided to add a jazz flare to show a little more of my musical passions…’ While this song in and of itself has been covered a million times, from artists like Joy Williams, Jaci Velasquez, Bebo Norman and Jadon Lavik, to Francesca Battistelli, JJ Heller, Sidewalk Prophets and Matthew West; this new interpretation by Hannah Kerr continues to make me enjoy this particular carol all the more, as this song, while it doesn’t really speak about the Lord’s birth, does nevertheless remind us all to have a great Christmas each year, to think upon the things that matter, and to appreciate our loved ones, even during the chaotic moments of Christmas-time!

“Breath of Heaven” was originally written and recorded by Amy Grant from her Christmas album in the early 1990s (and subsequently covered by artists like Jessica Simpson and Kutless for their respective Christmas albums in later years), and now here we are in 2017, with Hannah once again covering this famous song. And while I myself haven’t heard Amy’s original, Hannah nevertheless delivers a near-flawless rendition of a song that will certainly stand the test of the time as the years continue to roll on. As the song is presented from the viewpoint of Mary the mother of Jesus, ‘Breath of Heaven’ is an honest portrayal of how Jesus’ mother was feeling during the moments surrounding his birth- alone, scared, hopeful, excited, and everything else a mother would feel. We are given a glimpse into the mind and thoughts of Mary through this track, so much so that I initially thought this song was an original written by Hannah before I did some investigation- that’s how passionately Hannah sings! Co-written with Andy Gullahorn and Jill Phillips, the title track allows us to sing a new song unto the Lord, declaring that He is indeed our Emmanuel, even though the people at the Inn rejected Him and He was thus born in a stable surrounded by animals, while it is ‘Christmas Eve in Bethlehem’, co-written with songwriter Jason Earley, that is my very own personal favourite out of the songs on this EP, and is my favourite originally written Christmas song I’ve heard since Matt Maher’s ‘Glory (Let There Be Peace)’. A modern hymn of sorts (can you have a modern hymn whose theme is Christmas?), we are presented with a conundrum of sorts- what if we were the innkeeper, the wise men or the shepherds on Christmas Eve- how would we respond to Jesus the Saviour? How would we react, not knowing the Christmas story as we do right now in present day? The song delves into such questions like that, and really gets to the heart of why we believe what we do about Christmas and the themes surrounding the holiday. A song that will be on repeat on my iTunes Christmas playlist for months to come, this is a track certain to challenge and encourage whomever hears it!

Hannah’s introduction into CCM in 2016 with Overflow was nothing short of poignant and heartfelt. Her follow-up Christmas EP Emmanuel continues to be as heartfelt, maybe even more so. Sure, she may be a carbon copy of Casting Crowns in quite possibly every way, yet it is her fervent enthusiasm to present to us songs that make us think in terms of a kingdom mentality that I’m sure will propel her to new heights in months to come. From carols like ‘Have Yourself a Merry Little Christmas’ and ‘White Christmas’ to standout original track ‘Christmas Eve in Bethlehem’, this is a must for any Casting Crowns fan, or if you love artists like Lindsay McCaul, Bethany Dillon or Kari Jobe. Well done Hannah for such an encouraging and compelling EP. Already looking forward to the next one, whenever it arises.

3 songs to listen to: Emmanuel, Breath of Heaven, Christmas Eve in Bethlehem