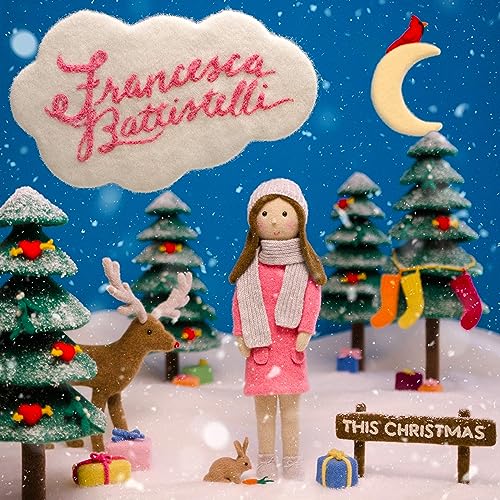 Francesca Battistelli has been in and around the CCM industry for quite some time. If you don’t know about her…well, google’s your friend. But if you don’t feel like googling for whatever reason, well, then here’s my excerpt of my review for Francesca’s 2018 album Own It– ‘…Everyone knows Francesca Battistelli…or they should. Considering the amount and sheer size of radio hits she’s acquired over the years, from songs like ‘Beautiful, Beautiful’, ‘I’m Letting Go’, ‘Free to Be Me’, and ‘Angel By Your Side’, to ‘If We’re Honest’, ‘Giants Fall’, ‘Write Your Story’ and ‘Strangely Dim’, to name a few; we have been blessed to hear this New Yorker wear her heart on her sleeve in every album release she has delivered to us since her debut project My Paper Heart way back in 2008. One of my favourite female Christian artists, ever, this powerful emotive, heartfelt, singer-songwriter, with Italian heritage, is now back in 2018, with a brand-new studio album titled Own It, her first full-length album full of new songs, since her 2014 chart-topper If We’re Honest. Yes, you’re right- 4 years, maybe even more than that, between albums. Maybe even the same time it took between Britt Nicole’s Gold and her self-titled album release in 2016. And yet, her success and continual praise throughout her more than 10 year career, on Curb/Word/Fervent, and also in an industry that is dominated by men, is something to be celebrated, even now as we see a continual rise in the amount of women entering into CCM, namely artists like Lauren Daigle, Kari Jobe, Mandisa, Dara Maclean, Tori Kelly, Riley Clemmons, Sarah Reeves and Jasmine Murray, to name a few (I’m sure there are loads more female artists). Francesca is a role model to many teen and young girls, and in some ways, a role model to me as well (a male in my 20s!). And so does Own It live up to it’s hype that has surrounded the album for quite some time (a few months!)? From the Motown inspired ‘The Breakup Song’ to the 1980s style ‘Love Somebody’ and the worshipful duet ‘Defender’ (with Steffany Gretzinger), as well as the powerful pop anthem ‘This Could Change Everything’- a song that can also succeed very well in mainstream radio as well as Christian radio; this is must-have album for anyone who loves Francesca and her music of the past, or anyone who loves a little inspirational motivational album with a faith edge. If anyone who is reading that hasn’t heard of Francesca or her music before- I’d recommend you start off not with Own It but rather, The First 10 Years that encompasses the vast majority of her radio hits. Then listen to Own It– there’s a better appreciation that way, than the other way around…’

It is in this quote above where I’ve realised that I haven’t listened to Francesca’s music in a regular basis since prior to my blog series…and maybe that’s neither here nor there, and even now still, she’s still one of my favourite female artists, ever. And so when there was an announcement of her releasing her second Christmas album, I was intrigued about This Christmas. Yes her first Christmas album was aptly titled Christmas, but that album was a gem, something to be honoured and treasured. It made me appreciate on a Christmas level, jazz music, and big band stuff too. With her first Christmas album coming out in 2012, Francesca is back it again in 2020, with another Christmas album. Does this album live up to the hype (or even lack thereof)?

Let me just say from the outset that I enjoy a lot of Francesca Battistelli albums and songs, I love her music style and her voice. But needless to say, this is my 9th Christmas album review in about a week, so I guess by this time, I’m looking for something unique and different compared to anything else I’ve heard this year. And unfortunately,…this album doesn’t really stand out this year. Yes, there. I said it. While objectively the album is good- we can see all the big-band influences on the album, from a personal standpoint, I wasn’t connecting to the songs that much at all. When most of the Christmas albums I’ve heard this year were unique (acapella for Pentatonix, Aussie music for Delta Goodrem, rock for Goo Goo Dolls, and soul/jazz/gospel for Tori Kelly), Francesca’s album feels a little bit…well, getting-on-the-bandwagon, shall I say? I mean, here’s my examples of this claim though. Songs like ‘Silent Night’, ‘Let It Snow’, ‘Sleigh Ride’, ‘Rudolph’, ‘God Rest Ye Merry Gentlemen’, even the joyous secularised-hymn ‘This Christmas’, have all been circulating within the community for years, and some are present on this year’s Christmas albums at various points in time, so when it came to listening to this album, I felt a little bit…well, let’s just say that I was thinking to myself ‘gee, I’ve heard this before’ throughout most of it. I know this sounds like as harsh statement, and it probably was, but what I will say is this- no amount of charm and joyfulness is going to save this album. This feels like an album recorded by someone who wants to get something out there, between official album releases. Not that is what I believe Francesca is actually doing, but oftentimes I wonder why certain artist’s Christmas albums feel much more energetic than others. All these songs I’ve aforementioned, I’ve heard before. Francesca’s versions, they’re not bad, but they’re not having the ‘wow’ effect either. Even songs like ‘Marshmallow World’ (from her 2012 album Christmas) and ‘Messiah’ (from her 2017 The First 10 Years album) seem a little bit out of place here. Even though the songs in and of themselves are good, it just feels like a mish-mash of tracks compiled here on this album, that after listening to this album once through, you won’t really want to revisit it for the remainder of the year, because, well, there’s other albums to listen to right?

The only saving grace (or graces) for this album (to bring it to a 3 instead of a 2) are the songs ‘Behold Him’, ‘Christmas Valentine’, ‘Carolin’ and ‘December We’ll Remember’- ‘Christmas Valentine’ encourages us to pursue not necessarily the material, but be reminded that ‘…you don’t need to get me presents, all I want is something money can’t buy, baby won’t you be my Christmas Valentine?…’ while ‘December We’ll Remember’ is a song of remembrance as we try to make a Christmas a time to remember, to make this time, as chaotic and uncoordinated 2020 can be, a time of making memories as we fellowship with our loved ones, ‘…singing carols and harmony, a December to remember…’ ‘Carolin’ harkens back the theme to a time where maybe we all were young, and we and our friends were out in the streets, singing carols together, before COVID-19 (a reminder and a hope that we will get back to carolin’ again, after all this catastrophe is over!), but my real favourite song on the album is ‘Behold Him’. That song was originally recorded last year; and was going to be released to radio in 2019- but was ultimately pushed back. Now in 2020, ‘Behold Him’ takes on a whole new meaning as we all look above and behold our Father, even in the midst of uncertainty and worrying. COVID-19 makes Christmas a difficult time, and we need an anthem for people to declare in times like these. ‘Behold Him’ is one such anthem.

‘…the story behind this song [Behold Him] is an unexpected one. Truth be told, this song was written, recorded, and about to be sent to radio for Christmas 2019, but at the last minute, God put a major check on my heart. So much so, we pushed pause on this song, and on a Christmas EP. Honestly, it was disheartening to have a song like this one ready to release and feel like God was putting the brakes on. But even with the confusion and disappointment, I felt the Lord give me a divine reassurance that this song in some way and somehow was meant for someone in the coming year. Little did I know in that moment over a year ago, the things that would transpire in our country, in our world, and in our communities. In 2020, we have experienced loss together, some deeper and wider than others, but we have all been forced to face disappointments, sit with unmet expectations, and even experience excruciating loneliness and sadness. These troubles, while uncomfortable, remind us ever more so that this world is not our home. It is in these uncertain times that we turn our eyes to the comfort and security of a God who does not look away from our suffering. “For we do not have a high priest who is unable to sympathize with our weaknesses, but we have one who has been tempted in every way, just as we are, yet he did not sin,” – Hebrews 4:15. In this upcoming Christmas season, I pray that we all can focus our attention on the birth of our Savior, the one in whom our hope is secure and never faltering. May we turn our attention from the noise of the world and truly, simply Behold Him…’

Francesca’s new album is ok, but it wouldn’t be my go-to album for the December season. The songs on there, objectively are good, but it feels like all the carols and holiday songs have been done and rerecorded to death. And they have. The possible only saving grace to this album are all the original tracks. And so maybe, this is an album to cherry-pick the songs on Spotify and then leave the rest. I’d know I’d do that. But who am I to say anything? Check out this album at least once. Francesca is still one of my favourite artists ever, regardless of this review. Her ability to create soul/CCM is something very unparalleled, and something that makes me enjoy big-band music all the more. But no more renditions of ‘Silent Night’, please, by anyone? I have listened to enough already. Regardless of my griping though, Francesca’s album is a great listen…if you haven’t been saturated with Christmas music this year, like I have been. Needless to say, this is an album to enjoy if you love big band music, Francesca’s music of the past, Natalie Grant or Britt Nicole. Well done Francesca, especially to the song ‘Behold Him’. Can’t wait for another full-length studio album, whenever that may arise.

3 songs to listen to: Behold Him, December We’ll Remember, Messiah