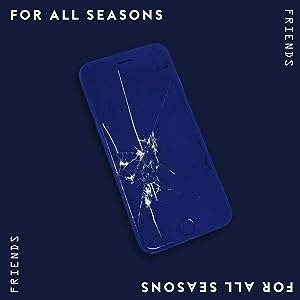 For All Seasons are doing a new thing. Ever since they signed to Centricity Music (arguably one of the most underrated labels, housing artists like Jason Gray, Andrew Peterson, Lauren Daigle, Jordan Feliz, Unspoken and Plumb, to name a few), this relatively new trio from California unveiled to us an EP titled Clarity in early 2018. While the EP itself was a little on the shorter side, the collection of songs was in fact one of my favourite EP’s of that particular year. The band delivered songs full of enthusiasm and passion- continuing to assert their prominence in today’s CCM/worship music scene with Clarity and the standout songs on the EP, ‘No Other’, ‘Bigger Than’ and ‘Higher’. Fast-forward to 2019, and the band are partnering with patreon to unveil to us one song a month- and at the end of their one-song-a-month project, I’m sure each of the songs will be collated together to form an album! ‘Every Good Thing’ was the first song release from the band that was the start of this one-song-a-month journey. The January song, ‘Every Good Thing’, was everything we can hope for from a For All Seasons song, and more, as we were reminded that every good thing that we receive or even hope for, came from the Father in the first place. February saw ‘Light and Momentary’ come to light, the song tackling the theme of waiting and longing, as lead singer Emily Hamilton delved into the Bible verse of 2 Corinthians 4, where Paul reminds us that though we may have present weakness, that doesn’t compare and ought not take away from the expectation and anticipation of the future glory of Christ set before us.

What is unique about this release this year from For All Seasons is that each song is built around a theme- ‘Every Good Thing’ unveiled to us the theme of ‘seeing’ and wanting to see things the way God does, while ‘Light And Momentary’ was reminding us about the season of waiting, and how to wait for circumstances to arise or to stall, often requires faith and belief in what God already promises us to be true. Here we are in the middle of April, and me giving my own thoughts about the March 2019 song release from the band- ‘Friends’ (no not the Michael W. Smith cover), an original song about, yes, friends. Topically the song tackles the issue of loneliness. Let it be a reminder, that these songs and topics are also discussed in length in a newly unveiled podcast series the band has unveiled to iTunes not too long ago, as well!

Loneliness is a real topic we as a human race can often sweep under the rug in an attempt for us to declare that we’re fine, when we know that we aren’t. So it is good for such a band like For All Seasons to tackle such a topic that sadly isn’t discussed that much within Contemporary Christian music, as a whole. The song itself is a b.o.p. (or as the urban dictionary categorises a b.o.p.- a song that is catchy and a great pop song that will have a legendary significance both now and in the future), as the band uses the medium of song to bright forth to the fore a topic that may have otherwise not been touched…for a long, long time. Loneliness is a taboo topic, but it shouldn’t be…but, in reality, who would really want to discuss the fact that they themselves are lonely, even if they have amassed a lot of material possessions? As the band themselves relay to us about the theme of ‘Friends’ in general; ‘…one of the most incredible things about releasing our newest song, ‘Friends’, is the messages we’ve received from people who are recognizing that they are not alone in feeling lonely. So often we explain away our feelings of isolation because, “how could I be lonely when I’m surrounded by so many people on a daily basis?!” That’s where this “crazy” lyric came from. We can feel confused and further isolated by our subtle (or not so subtle) feelings of loneliness. But, we have to remember that we are not alone. That’s the first step; acknowledging that God has created us for community and given us opportunities to reach out to those around us in order to fight against loneliness…’

A song that is as much fun to listen to, but also needed in a society that seems so connected digitally, but distant on a face-to-face level; Emily Hamilton and the rest of For All Seasons have given to us a song that is by far one of my favourites from the band, since ‘Higher’ debuted way back in 2017. And as I leave this review/thoughts on the song, I’ll leave a article piece by Jeff Luckley, band member, and someone who really articulates what the song is about and the theme of loneliness, maybe even better than I ever could. And so below- Jeff’s thoughts on ‘Friends’ and the issues of loneliness. And so, off we go and read what he has to say below, as well as listen to ‘Friends’ and be reminded that God is our ultimate friend in this crazy avenue of life. We are not made to live with loneliness- but maybe, just maybe, the key to becoming connected with community is to realise we have a problem with loneliness in the first place!

Why is it so hard to admit we feel lonely? If we’re honest with ourselves, we’ve all felt it. Many of us may even feel it at this very moment; those times we wish someone would just check on us & ask how we’re doing. If I’m completely honest, I feel left out pretty often. I feel it when I watch my friends’ lives unfold digitally, while traversing across some bleak country road in our band van. I feel it when I watch shows like Stranger Things or New Girl, & wish I had a group of people that knew me like that, that had my back no matter what, that I got to see daily. Often, I don’t admit to feeling lonely because I think it makes me look weak or like I don’t have my life as figured out as I should. Plus, I don’t want a pity friendship. No one wants anyone to feel bad for them.
But what if that’s the problem? What if telling others how we truly feel is ACTUALLY the first step toward genuine friendship? What if being vulnerable & asking for help is the very thing that opens the floodgates to the connection, we all so deeply need? What if naming our weaknesses & voicing our fears is the catalyst that will begin to free us from loneliness? No matter how hard we convince ourselves sometimes, the truth is, we are not alone in feeling alone. Sure, we face rejection all the time. That’s promised us. But that doesn’t mean we should throw in the towel. All our relationships are just flawed reflections of the perfect community found in the Triune God. But here, even now, there is so much good to be found!
There is richness in genuine friendship, & beauty in being known, flaws included. I think it’s better to invite people in and be hurt by them rather than run the risk of never being truly known by anyone. Let’s be vulnerable. Let’s invite people in. Love is bold. It’s an absolute risk, but it’s absolutely worth it!