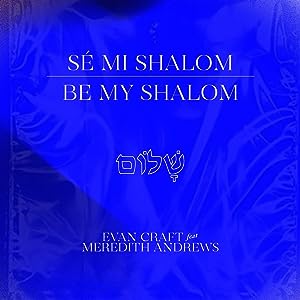 Evan Craft has been in and around the music industry for quite a while, releasing music in both English and Spanish. Since unveiling his debut project in 2012, Giants under DREAM Label Group, Evan has subsequently unveiled to us songs in both English and his native language Spanish as the years went by and he became an independent artist. Some songs have been renditions of worship songs we already know- like the bilingual version of ‘We Praise You’ featured on Matt Redman’s 2020 album Let there be Wonder, or the Spanish version of the powerful Hillsong UNITED hit, ‘So Will I’. But much of his catalogue, aside from his full-length album Giants which is all in English, is in fact in Spanish- which is OK. At the heart of his ministry is delivering worship songs in Spanish for that particular community, and I think it’s good for an artist to be proactive in giving something for a vibrant, dynamic and impactful, community across the U.S. Evan’s worship songs have always come with a sense of earnestness and a heart of providing a space where worship- free-flowing worship, can occur. Enter in his 2020 new song ‘Be My Shalom’- a collaboration with worship leader/artist/singer-songwriter Meredith Andrews, as this track is recorded in English, Spanish and a bilingual version. A track that has been a great one to reflect on and meditate to, this 3:08 track takes a great spin on what we believe the word ‘shalom’ to be.

Originally thought by myself to be a Hebrew word that is only represented in the Jewish faith, what I understood of the word was shattered wide open as I read into what the word really means. According to Wikipedia, and I quote, Shalom is ‘…a Hebrew word meaning peace, harmony, wholeness, completeness, prosperity, welfare and tranquility, and can be used idiomatically to mean both hello and goodbye…’ This definition is a great reminder that we as Christians believe God the Father, Son and Holy Spirit to embody all these qualities that ‘shalom’ refers to, as Evan encourages us alongside him to powerfully declare God to be our shalom for us- our peace, hope, the part that completes us and makes us whole, the God who gives to us a sense of harmony as we commune both with Him and creation; ‘shalom’ is a word that is great to use to declare over our lives as Evan delivers a track that is a longing and yearning, for God to be everything in our lives, altering our focus and shifting our gaze on what is transient to what is eternal. Meredith Andrews is also a nice touch to the song, and even though it isn’t really a duet- Meredith in fact is only reserved for backing vocals; the song nevertheless is given great power and authority when there is a combination of different voices proclaiming the exact same track, a great reminder that such a song as this needs to be accessible and relevant for everyone, not just a select few. ‘Be My Shalom’, and its Spanish and bilingual counterparts on this ‘EP’ is a track that I’ll continue to play on my Spotify playlists for quite some time, and is a song that has fast become one of my favourites in 2020 thus far. Well done Evan for such a powerful track, now…no time like the present to listen to some of his Spanish material, right?