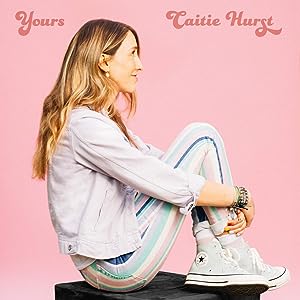 Caitie Hurst has been in the music industry for a few years now. Since unveiling her debut EP on Centricity Music titled How Can I Be Silent back in 2018, that featured the standout title track, alongside other memorable ones- ‘Walking on the Water’, ‘Wanderer’ and ‘Answers’ to name a few; Caitie’s introduction into a music industry that is ever changing, is one of joy and jovial enthusiasm as her music has become very infectiously enjoyable, and a reminder that Caitie herself, musically sounding, can travel alongside artists before her like Britt Nicole, Love & the Outcome and Lauren Daigle- because that is what I’d describe her musical genre. Nevertheless, Caitie’s introduction to CCM has resulted in a well-received EP, as well as a follow-up track ‘All the Things’, both the EP and the song can be read as reviews on the website here and here respectively. Now fast-forwarding to 2020, and we see Caitie give to us another track, this time a track titled ‘Yours’- whether or not both ‘Yours’ and ‘All the Things’ belong to a bigger project (EP or album) or otherwise still remains to be seen; but what I do know is this- ‘Yours’ is a catchy track that is as much fun as it is heartfelt. And it is one of my favourite songs of the last few months.

As Caitie starts off the song itself, we’re hit with the powerful words of questions we as humans could often be afraid to ask- ‘…what if I believed when You looked at me, there was no judgement, wish I was convinced Your love is on a mission and I am the target…’ It is a common thing to believe right now in society that when people look at us, for whatever reason, they are straight-away forming their own opinion, in a sense, they’re judging us, unintentionally or intentionally. Nevertheless, Caitie reminds us all that when God looks at us, He doesn’t do the things that humans often do. There is no assumptions or conditions. There is no judgement or chiding, no wishing we could be better, no attacking us because we know we can be better. What God does is listen to our plights, hears our own grievances, weeps with us, and allows us to come to Him on our terms, never rushing the process of our awakening to the truth that Christ loves us because that is just in His nature to do exactly that. As Caitie herself imparts to us the story behind her song, we see that this track has been written and recorded for anyone who may feel like they themselves are unworthy to come to the Lord just as they are- ‘…I wrote “Yours” for anyone who’s ever felt like you had to work your way up to earn God’s love and approval. To someone who’s known God for a long time and feels like they have to follow a bunch of rules and do all the things that make them look really Christian, to earn the love of God and feel like they’re pleasing Him. Or to someone who feels way too far away from God because of their lifestyle or beliefs or past sins; and feels like they would never be someone God wants. I’ve learned that neither of those things are how God wants us to view Him. In fact all throughout the Bible it’s the opposite!! God doesn’t need our perfection or our spiritual resumes, He just wants a relationship with us! I pray when you listen to this song you’d be reminded of God’s loving, merciful, and gracious character- and of the fact that He wants so badly for us to walk with Him & receive the love and the grace He offers us! Not because of what we’ve done or haven’t done, but because He created us and He loves us just because that’s who He is!…’ It is in this quote that I am impressed with ‘Yours’ and its impact that it’ll have on a lot of people who hear the track. And until such a time where Caitie unveils to us another song, or an album or an EP, ‘Yours’ is a great companion for us to have so that we can understand His undying and unending love for you and me, and that all He wants from us is nothing fancy, but just ourselves, as we are, so that He can do the work in us that we know will shape us into something that is of our good and His glory. Well done Caitie for such a powerful track, looking forward to whatever album/EP comes next.