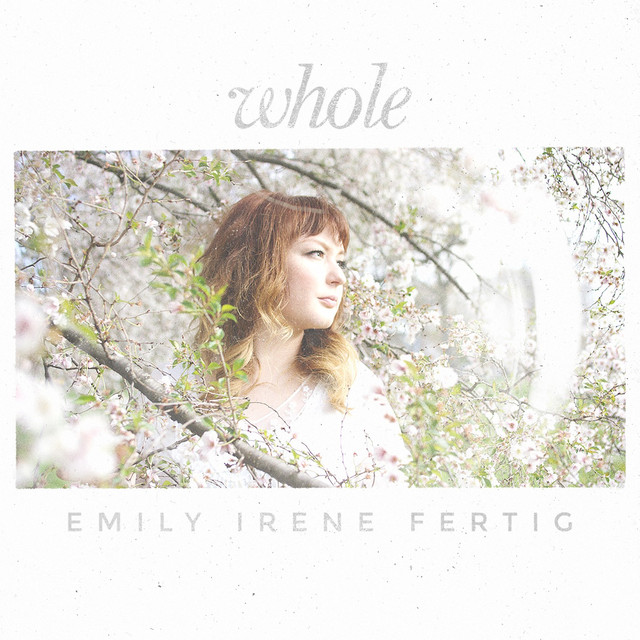 “…I tend to write most of my songs from one of two “times”. I either write from right where I am at in that exact moment, so that I capture every intricacy and nuance of a situation. The other ‘time’ is what is right ahead of me, but not where I am yet. I view it as prophetic, writing just a little ahead of where you’re at. In a way, it’s declaring truth over yourself (and whoever you are singing too) even if it hasn’t manifested yet. This song is the latter. Sometimes you have to sing it, until you believe it. The chorus goes “You are making me whole…” I didn’t want to claim wholeness right where I was. And I don’t even want to claim wholeness now. I want to constantly be being made whole. I won’t ever be 100% unbroken on this side of eternity but I believe we should fight for as much wholeness in our lives as possible while we still live and breathe here on this earth. Wholeness is the goal, but it’s an ever moving target. The idea of wholeness is begging us to come deeper and deeper into oneness with the Lord, where everything flows from that communion…” The story of Emily Irene Fertig becoming a solo artist is a miracle. Quite literally. The former frontwoman of Shine Bright Baby (as they were known from their inception in the 2000’s to their name change to SHINEBRIGHT, which they used to release their last album in 2015) decided along with her husband Nathan to end the band in 2016, and from then God started putting things in motion for Emily to begin the next chapter of her music career.

Because, I’m sure you readers and listeners of music are well aware- an artist’s work is never done. Think of Peter Furler, Phil Joel, Paul Colman, Jason Dunn, Tauren Wells, Lacey Sturm, Kristen May- all of these vocalists left their bands, but were not fully done with music either- God was still calling them to do what He wanted them to do, and that is touch people’s lives through song. The same goes for Emily, who through a series of God-orchestrated moments (of which you can read here!), found herself back in music. The result is “Whole”, her debut single as a solo artist. With Emily also releasing two more singles later on in 2017, as well as possibly a debut solo EP or album, let us dive in to see how “Whole” is different from her songs recorded with Shine Bright Baby.

Stylistically different in the fact that the piano is at the forefront here, and it’s a ballad and more worshipful in nature, as opposed to the pop/rock we’ve come to know and expect from Shine Bright Baby (and also the dance/EDM from SHINEBRIGHT); “Whole” majestically opens with haunting piano riffs, and an atmosphere of brokenness and yearning to be made whole. While Emily recognises the sin in her life in this song, and acknowledges the continuing process of God making us whole until the day we arrive into His presence in heaven, we are encouraged by the ever true fact that ‘…there’s no piece of my past, no part of my story You can’t redeem, what I thought was lost, You crowned with love and gave it meaning…’. Everything in our lives can and will be used by God for His glory and our good, and while we are not perfect now (we will be in heaven!), God is constantly shaping us and remaking us in His image. So the notion that we are whole in Jesus, is a state of being that we haven’t arrived at yet, but are declaring in that moment, prophesying a promise to ourselves that God will fulfil in the future. Confusing, yes, but this song is needed, so that we can fully realise that with God anything is possible, and with God we are whole, thus we do not have to be ashamed or feel unworthy. We can live in freedom the knowledge that our sins are wiped clean and we are a new creation!

“…It is the heart of the Father that nothing, LITERALLY NOTHING, is left unredeemed. Not that chapter in your life you would rather skip over, not even creation is unredeemable. Redemption opposite of the laws of nature. It’s the way of the heaven. As if redemption isn’t enough, the Lord goes even farther than just restoring our good name but He crowns us with His love and favor. He refuses to see the errors of the past, He is blind to them. This search to fully understand redemption has led me down the most eye-opening road. I see redemption everywhere now. I have witnessed it in my own life, from obvious things like this project and these songs to small everyday things. I now position myself with gratefulness. I declare the Lord’s goodness over my life because I know He is kind. He has seen every disappointment and set back but those things don’t stop His mission to redeem every single thing. I see the Lord’s heart to redeem everything from creation to time to every person’s story. I know this is only the beginning…” While life on earth is not perfect, we are perfect in Jesus’ eyes. And as Emily Irene Fertig has demonstrated in “Whole” and her story in how she came to be a solo artist, we know that God has our best interest in His heart when He is moving things so that His plans can come to fruition in our lives. “Whole” is one of my favourite songs of 2017, and Emily should be proud that such a concept of God continuing in moulding us here on earth and reshaping us to be more like Him, is present in this song, given that many people on this earth feel shame and guilt at being broken and unworthy. With this song being uplifting and healing to probably all who listen, I can’t wait to hear more of Emily’s solo material soon. For the time being, let’s listen to “Whole” until we fully can grasp the concept that Jesus has made us whole!

3 songs to listen to: Not an album or an EP, yet this is one of my favourite songs of 2017, so you can listen to the track 3 times or maybe more, or until we fully understand the notion that only Jesus can make us whole!