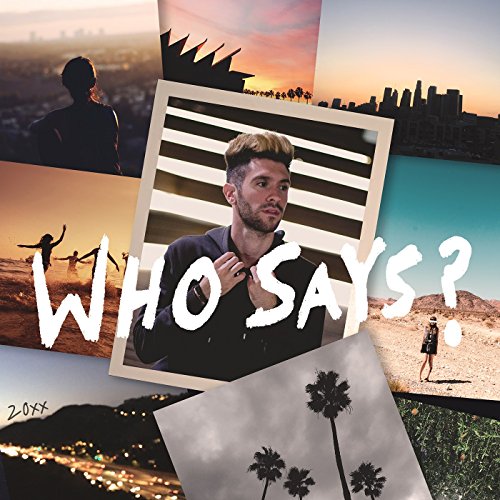 “…If I summarised the lyrics of ‘Parachute’ in one word I’d say ‘trust’. Like you were saying how there’s this divide in Christian music and regular music, I kind of want to stand in the middle of that because I do believe in God and for me ‘Parachute’ is about God and it’s about trusting God because I needed to in that place in my life. I mean, I need to all the time but specifically when I was in LA I needed to put my trust 100 per cent in God, so that’s what the song is about. But if you notice it’s not a worship song. I’m not using the word Jesus; I’m not saying God because I wanted it to relate to everyone. And the response that I’ve been getting from people – I have people saying that they love this song and it makes them think about their girlfriend or wife or husband and that’s the goal for me. The last thing I want is someone to hear music and feel excluded and say oh, this is about something that I’m a little uncomfortable with. I believe that music is for everyone and you should be able to apply it to your situation in your life. So that’s the goal with what I’m trying to do…” If there’s one artist that has come out of nowhere recently, and taken the world by storm, it is Joshua Micah. I can hear you scratching your head and thinking ‘Who?’. Well let me back track for a bit. Joshua signed to an indie label when he was 18, and although that experience, which lasted two years, turned out to be an experience that he learned something from, but ultimately wasn’t what God has in store for him; God indeed had bigger plans. With Joshua finally surrendering fully to God, and allowing Him to set the course for his life and music career, “Parachute” was born, and now more recently “Who Says”- which the music video premiered on Air 1 a little while ago. Though I wasn’t that inspired by “Parachute” when it released last year (it is catchy, but personally something was lacking that I’m not sure what it is!), it is “Who Says” that I reckon will place Joshua on the map, and allow him to reach both Christian and mainstream markets, spreading the gospel to all the corners of the globe.

“Who Says” starts off with a driving electronic synth presence and Joshua’s distinct and catchy vocals, as he ardently encourages us to ‘…see that wildfire in your eyes, keep on burning keep that dream alive, can’t let go of what you got inside, maybe it’s crazy, maybe it’s meant to be…’. We all have hopes, dreams, plans, things we long to occur in the future, and Joshua’s inspirational melody tells us that we can reach for our dreams, even if we do not have the spouse, job, car, family, white picket fence that we envision will happen in our lives at a certain point in time of our lives. If we have a dream that goes against the norm, or against the timing of when society says we’re ‘allowed’ to chase this dream; then does it really matter? Life is full of ups and downs, and we are all human, we’re all flawed, we certainly do not have everything together all the time. So why do we pretend to be perfect? We don’t have to. So, what if we don’t get married by 30, or have a stable job, or income, or still live at home? So, what if our plan to do x, y, z before this age fails? Do we really have to have a, b, c, d accomplished before we do x, y and z? Some things to ponder over, and though while Joshua doesn’t mention Jesus, it is implied that if we surrender to Him, life will never be the same- it won’t be predictable, it won’t be mundane, it certainly will be messy and filled with hardship, but it will be worth it!

“Who Says” is an anthem, not just for now, but for forever. A reassurance that everyone has their own unique path, which may be the same as someone else’s path but it doesn’t have to be. And just because you don’t do things in the right order, doesn’t mean that you are a failure. You’re not. You’re a child of God and are unique and special. End of story. Well done Joshua Micah for recording a song that can transcend all boundaries and people from all walks of life, and I commend you for stepping out in faith and showing us that dreaming and acting on dreams can and should occur at any stage of life, especially when God prompts you to act!

3 songs to listen to: Not an album or an EP, however you can listen to the track 3 times or maybe more, or until we realise that we do not have to have everything in life figured out, and  that it’s ok for life to be messy sometimes, as long as we understand that it is God who can and will bring our broken pieces back together!