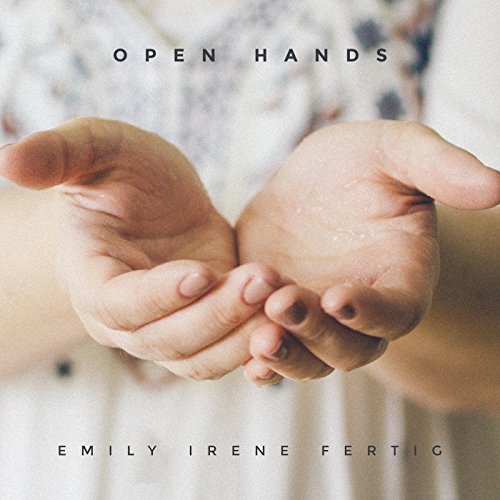 Yes, yes, yes, I know, I have already reviewed singles from Emily Irene Fertig before (both “Whole” and “Devotion”), so I guess now you’re probably sick of me talking about Emily’s story in the intro, and a similar concluding paragraph to the previous two reviews, with my thoughts of Emily’s latest song sandwiched in the middle. Yet here I am, doing exactly that, with Emily’s latest single “Open Hands” (which is indeed thematically similar to Laura Story’s song of the same name!). Why is that the case? Well first off, while previously I said that “Devotion” is the most important song you’ll ever hear in 2017, that was before I heard “Open Hands”, which I would say is equally as important. Again, I didn’t say the most popular or catchy. But first things first- if you haven’t heard of Emily Irene Fertig, then take a read of my reviews of “Whole” and “Devotion” where I delve into how Emily and her husband Nathan decided to end the band, then God called Emily into music once again (which in itself is quite remarkable and full of God-orchestrated moments).

“Open Hands” is brilliantly led by vibrant synth and keys, and delves into the notion that we, as children of God, are free already, so we should start living that way. As Emily suggests in this engaging and impacting melody, the best way to do that is to come to terms with the fact that there’s ‘…no more fighting to be free, no more striving to succeed, all I want is what You have for me and nothing more, finally my hands are open, heart wide open…’, then step into the plans God has for us, with the freedom He’s given to us, as sons and daughters of the Lord most high. It’s a scary thing to surrender our everything and our control to someone we cannot see, yet God is promising us that He has our life under control and in the palm of His hands. Countless promises in the Bible give testament to that, and Emily reassures and encourages in this heartfelt 6-minute melody that we can give our all over to God and live without chains and burdens. At the cross, Jesus died so that He could bear everything we think we need to, so with the releasing of our chains comes true freedom and living life with our walls down, and our hands open. Well done Emily for a confronting yet comforting melody that inspires and is sure to provoke healthy discussion amongst listeners.

Once we are ‘comfortable’ or at least wrestling yet also accepting the notion of not carrying our burdens alone, and instead giving our entire being to the One who knows us all completely and knows how to handle our baggage; life suddenly becomes all the more beautiful. And as Emily Irene Fertig has demonstrated in “Open Hands”, “Devotion” as well as “Whole” before it, and her story in how she came to be a solo artist, we know that God has our best interest in His heart when He is moving things so that His plans can come to fruition in our lives. “Open Hands” is one of my favourite songs of 2017, and Emily should be proud that such a concept of affirming the fact that we can lay our burdens down at the cross, and we can admit that we cannot carry our loads ourselves, is present in this song, given that many people on this earth feel weighed down by everything that hey think they need to carry on their own. With this song being uplifting and healing to probably all who listen, I can’t wait to hear more of Emily’s solo material soon. For the time being, let’s listen to “Open Hands” (and “Devotion” and “Whole” for that matter!) until we fully can grasp the concept that Jesus wants our open hands and our entire surrender!

3 songs to listen to: Not an album or an EP, yet one of my favourite songs of 2017, so you can listen to the track 3 times or maybe more, or until we fully understand that all we can give is our open hands to God, as we step into the plans He has for us, which is far greater than our own.