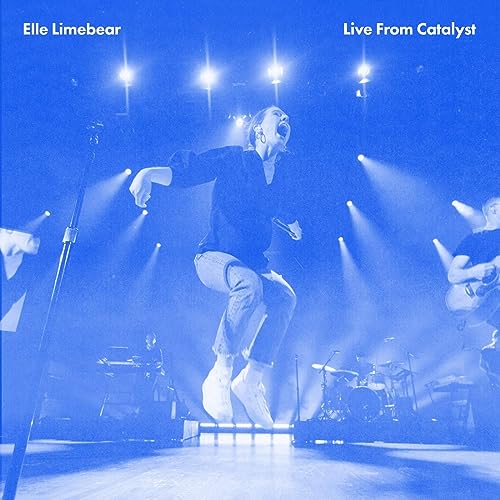 Daughter of ex-Delirious? frontman and now successful solo artist Martin Smith, Elle Limebear has created a name for herself over the last few years or so, when it was evident that Elle decided to follow suit and become a music artist just like her father. Though her father was a part of the band Delirious? throughout his whole music career; Elle has decided to start off her career as a solo artist. Signing to the label house of Provident Label Group (the same label house as many other artists like Casting Crowns, Zach Williams, Tauren Wells, Matthew West, I AM THEY, Matt Maher and One Sonic Society, to name a few), Elle and her music is certain to be enjoyed by people who have been fans of her father’s band Delirious? all these years, or even other similar sounding artists who are currently taking the worship industry by storm- from Rend Collective, and Kari Jobe, to Cody Carnes, Cory Asbury and Philippa Hanna. Since releasing a flurry of singles throughout 2018 and 2019, Elle unveiled to us Lost In Wonder in February 2020, consisting of 20 tracks- 6 originally from her debut EP released to us in 2019, alongside radio formats of already released tracks, as well as other newly recordings songs for the album, as we see Elle even sneak in a surprise within the track list of 20 tracks, a homage and a reminder to a band of the past. From songs like ‘Maker of the Moon’, ‘What Love Looks Like’ and ‘Call on the Name’, to ‘Love Song’, ‘Holding Me Still’, ‘Goodness’ and ‘Fly’; Lost in Wonder became one of my favourite worship albums of 2020. As Elle continued to press on in her father’s footsteps to create music akin o a very similar structurally Delirious? sound, Lost in Wonder was an album full of joyous celebration and declaratory anthems as Elle presented one of the longest CCM/worship albums in modern music history (20 tracks!), and brought to us any kind of resemblance to Delirious? that we’re gonna get, considering that the band themselves have vacated their place in the music industry for over a decade thus far. Now as 2020 has ended and 2021 has begun, we see Elle present to us another musical offering- this time a 3 song EP featuring a Delirious? cover, a modern-day worship song (that has been circulating around churches for quite some time), alongside an original worship song of hers, present initially on Lost in Wonder.

‘Glorious Day’ has been one of the most popular worship songs of recent music memory and over the last few years, ever since it was unveiled to us as part of Passion’s annual live project in 2017. Since then, ‘Glorious Day’ (originally performed by Passion band lead singer Kristian Stanfill) has become a beacon if you will, a go-to worship song to sing on Sunday mornings from 2017 onward. It has been a song that has exploded in popularity, and for me personally, been cycling through my own Spotify playlists on repeat for quite some time. And so, for Elle Limebear, up and coming worship artist, to cover this worship song, isn’t from left field; but is also a song that I was intrigued about. Similarly with ‘Lord, You Have My Heart’, a song originally by Elle’s father Martin Smith’s band Delirious? way back in 1994, re-recorded for Lost in Wonder, and then presented in this live format again for Live From Catalyst. ‘Lord You Have My Heart’ was one of the songs that I initially glossed over when I was listening to Delirious?’s music way back in the day, but here now in 2020, I’m thoroughly enjoying Elle’s interpretation of it, as we’re reminded in general, that sometimes a reimainged version of an older song, can reinvigorate excitement and anticipation for the original song, especially if said original track, wasn’t as attention-grabbing in the first place. The EP then rounds out with a live version of ‘Maker of the Moon’, an original song by Elle, that reminds us all what true worship is really like; and gives us a new song to sing in a season that often requires one. Not that there’s anything against older-style songs, it’s just that such a song like Elle’s is certainly one that will resonate positively with people, especially those who are indeed searching for a new worship song to connect with, for whatever reason. The message of the song is simultaneously simple yet profound- God creates the universe; but is also still committed and personable with each one of us. The song is just a tangible act of wonder back to the God of creation, in awe that He can create such a wonder as the universe, but also connect deep on a soul-level with each one of us.

Elle’s future in music looks very bright. Elle has followed in her father’s footsteps, and though even now, not many people may know she is Martin Smith’s daughter; Elle has nevertheless crafted a sound that, while sounding similar to Delirious?, has a unique atmosphere and style that can be akin to something Delirious? but also being something unique and different as well. With a great debut album Lost in Wonder, and a follow-up EP (Live From Catalyst), Elle is one such artist, that’s certain to be enjoyed by fans of Delirious? or just fans of worship music, full stop. Well done Elle on both Lost in Wonder and Live From Catalyst; here’s hoping people can hear these songs and listen to Delirious? as well, and vice versa. Maybe another few more Delirious? covers in the next few albums down the track?