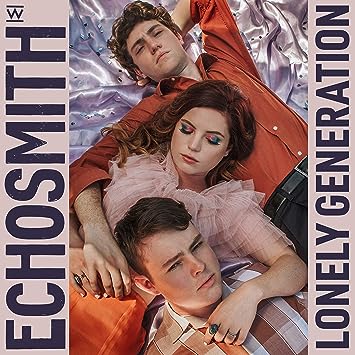 So it’s February already- how time flies! And now that 1/12 of the year is over, do you guys want to know what my favourite album of the year is? Yes? No? Of course you all do! Just because we haven’t reviewed that much doesn’t mean that we’ve stopped listening to music all together, am I right? Of course I’m right! Now that we’ve got that out of the way, let me say that this album which is my total favourite of the year thus far isn’t Tauren Wells’ Citizen Of Heaven, the second solo album from the former frontman of Royal Tailor, featuring the hit single “Miracle” and stirring duets with Jenn Johnson of Bethel Music, Kirk Franklin and Rascal Flatts. Nor is the album We Are Messengers’ Power, the second album from the Irish CCM pop group, with the hit single “Maybe It’s Ok” and “Power”. No siree, the album that has spoken to me the most over the past month has been Lonely Generation, the sophomore effort from indie-rock sibling trio Echosmith.

Echo-what? You ask. I know, I know, this album may come a bit out of left field and as a bit of a shock…but no time is better than the present to dive in deep to an artist that is new or new-ish, right? I first heard of Echosmith when lead singer Sydney Sierota sang guest vocals on one of the many versions of For King And Country’s mega-hit “God Only Knows”. The result was one of my favourite duets in recent memory, and I just knew that once I heard the track that I needed to check out who Sydney was as a singer and who Echosmith was. After some digging and some more digging, I found out the heart of the band and some songs online- and let me tell you, they are definitely a band to watch out for in the future. No doubt these guys will be plenty influential in the future (but that’s for another post in the Momentous Mondays’ blog series!), but if you want to listen to Lonely Generation first up or at least want to listen to a few songs here and there before you see what they’re about, then check out “Cool Kids” from 2013, as well as “Come Together” and “Bright”. Then check out “Get Into My Car” and “Future Me” from 2017. You can also read Wikipedia too about Echosmith. Now…you’re all caught up and set. Now let’s dive in and hear some pop and 80’s themed dance goodness! They’re an independent band (which by no means is correlated with the quality of their music!) while they are Christians but don’t sing songs about Jesus, but rather about life instead. And as God is reshaping our definitions of why inspiring music should sound like, and music that glorifies Him; one may think that this album isn’t worthy for review because of the fact that it’s not about Jesus. But I say it doesn’t matter- God can use anything and He certainly has used Lonely Generation to point us more to Him.

‘…right now, we’re focusing on the title track “Lonely Generation.” We wanted to put this song out first, and have it lead the charge for the entire album. Musically, it’s really fun and it’s a good representation of where Echosmith is at right now. But also lyrically, I think it’s important for us and everyone to open up the conversation about how [our generation] is spending our time, with so much time on our phones and living through social media. I’m 22, and I’m trying to figure out a balance between real life and relationships, yet also making sure that I’m spending time talking to our fans and responding to as many of them as possible…’ The lead single, opening track and title track is “Lonely Generation” and was the first the band release from the new album. Way back in October, I heard a pop track that caught me by surprise, and when I listen to the deep and meaningful lyrics, I was amazed. I mean Sydney is 22 and we get this gem? Now we can say she and her brothers are talented beyond their years! Essentially this track is a lamenting of sorts as Sydney recounts about how much we all spend disconnected from relationships in the real world because we’re too busy on our social media and our screens. It’s a problem that has swept multiple generations for years and years, and no one has really said anything about it. But Echosmith has, and kudos to them, as this haunting, somewhat difficult-to-hear track is needed in society more than we think. We are indeed to lonely generation, and while Echosmith doesn’t really offer up any solutions, the constant questioning and probing remind us that we all need to have a look at ourselves in the mirror and determine whether they person we are right now is who we want to be and if not, how do we go about changing that narrative? Well done Sydney, Graham and Noah- this track rocks, plus it has a good message too!

The rest of the album is fun to listen to and is a trip musically back to the 80’s where music styles were much simpler, while the lyrics are still meaty with weight and significance and also not overwhelming too. Piano pop track “Diamonds” is next and is as encouraging as any song I’ve heard this year, with Sydney singing out about a fictitious girl who has low self-esteem and insecurity that she needn’t think that of herself, and she needn’t need to act like she has it all together, because she can change the world as she is, and in her own unique way. “Cracked”, driven by pulsating bass guitars, is a highly infectious 2 minute pop jam, with Sydney admitting that she’s a broken person and that anyone she becomes close to will know her cracks and falls, but then later being hopeful that ‘…at least I let the light in…’; while “Shut Up And Kiss Me” speaks about being forward and intentional in relationships rather than just sitting idly by and letting things coast along, which could end in disaster.

The electric guitar led 80’s themed “Stuck” dives into the metaphors, as we are met with a story of a stuck and broken marriage or relationship as Sydney declares that her mind is stuck like a roller coaster, over-analysing every single detail, highlighting the tension of trying to see the good in a hopeless situation. “Last Forever”, the midpoint of the album, then brings the good nostalgia back as this late 80’s/early 90’s themed track speaks about the good times, and keeping the good memories in our heart where they last forever- a song that could be covered by Owl City and sound amazingly awesome! The next trio of songs “Everyone Cries”, “Scared To Be Alone” and “Lost Somebody” has Sydney putting on both her Plumb hat and Brooke Fraser hat vocally and lyrically, as she inspires and encourages, giving us all hope for the future in a society where we may feel trapped and alone and afraid.

“Everyone Cries”, led by keys, is a sombre and reflective ballad letting us know that it’s ok to feel any and every kind of emotion because crying is part of the human condition and the human experience; while “Scared To Be Alone” has a Latin flavour to it musically, and has Sydney admitting that she thrives he most with people around her constantly, and that she’s scared to be alone. The revealing and confronting “Lost Somebody” complete with a unrelated but hilarious music video, rounds out the trio of encouraging songs, as Sydney reminds us all that relationships can be destroyed if we use the relationships for our own gain and not for the gains of others. “Love You Better”, another pop melody, is seriously one for the dance floor, and has Sydney vocally reminding me on this track of Nichole Nordeman as she laments about a past relationship, wondering if it’s too late to love her significant other better or not.

Yet probably the most personal and significant songs from the album for the band are “Follow You” and “I Don’t Want to Lose My Love”- the final two songs on the album which are special for Sydney- for reasons that I can’t say better than Sydney herself! – ‘…it’s a hard question [which songs are my favourite], because I love all of the songs for different reasons. But I’d say “Follow You” and “I Don’t Wanna Lose My Love” are two of my favorites, because they’re the final two tracks on the album. “Follow You” is such a personal song for me…I wasn’t sure if I wanted to put it on the album because it was so personal and vulnerable, but I’m glad I did. When people hear it, they’re going to get an inside look on me and into my heart, and how I was feeling at that moment. I wrote and recorded it in the middle of the night for my husband as a surprise. It was two weeks before we got married, and I wanted to play it for our first dance. When he heard it, it was a special moment for us, and for everyone at the wedding. It was a song that I wanted to give him as a wedding gift. “I Don’t Want To Lose My Love” is also an inside look into my heart and who I am. and it’s an emotional song. So I love both of those songs; I think they’re a great way to finish the album…’ And as a finish up ‘analysing’ these songs, it seems as if Echosmith have save the best for last- I seriously teared up a bit as I was listening to both “Follow You” and the album closer- and that’s how emotional and honest these songs, and overall this album is!

Is it premature to say that Echosmith are on their way to becoming new next Switchfoot? Not to put pressure on them, but the last album that made me think that much was indeed Switchfoot’s Native Tongue. So take that what you will, and let me say that Sydney, Noah and Graham deserve all the praise and all the accolades- Lonely Generation is flawless in my opinion, and is the first 5/5 album release of this year! Nothing more needs to be said- so hop to it everyone! Jesus speaks through music, even through mainstream music- and Echosmith’s Lonely Generation is proof of that!

3 songs to listen to: Lonely Generation, Stuck, Lost Somebody