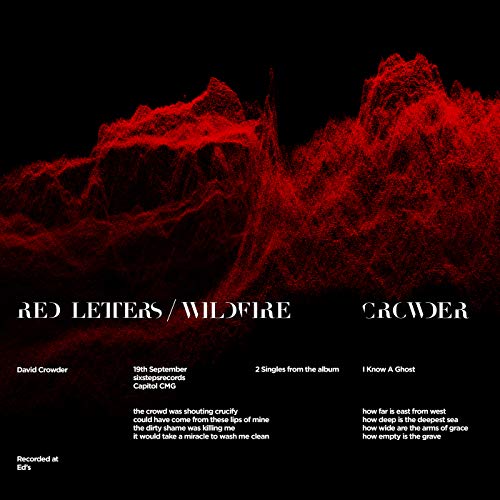 David Crowder is an enigma. That’s a fact. We will never know why he split from his bandmates from the band David Crowder*Band, then so soon after formed his own band titled Crowder. Maybe there was animosity. Maybe his bandmates were difficult to get along with. Maybe he felt God calling him to go solo, and they split amicably. Whatever the case, what eventuated was The Digital Age (with Mark Waldrop and Mike Dodson as co-lead singers) and Crowder’s solo music ministry. But while The Digital Age recorded albums that were solid, Crowder’s continued solo albums flourished with critical and commercial acclaim. Neon Steeple was one of my favourite albums of 2014, spawning hits such as “I Am”, “Lift Your Head Weary Sinner (Chains)” and “Come As You Are”; and American Prodigal, with its hits such as “Run Devil Run”, “Forgiven”, “Back To The Garden” and “My Victory”, was one of my favourite albums of 2016, so much so that I rated the album 5/5 (you can read my review here!). Now, just this year, Crowder has released his brand new single, a 2 track ‘EP’ of sorts, in preparation for his upcoming project I Know A Ghost. “Red Letters” and “Wildfire” have both released this past week, and if these two tracks are indicative of Crowder’s next release, then it is sure to be a fun and impacting listen.

“Red Letters” starts off the mini-project, as the hymn like and “All My Hope”/“Forgiven”-like melody pulls at my emotions- with Crowder emphatically singing in the persona of someone who actively argued for Jesus’ crucifixion yet turned to Jesus later on. Perhaps singing from the point of view of the thief on the cross who repented; Crowder thanks God for the red letters when he became a free man, and basically this song is a track of gratitude and thanks, with the chorus especially poignant and heartfelt, relaying that ‘…when I read the red letters and the ground began to shake, the prison walls started falling and I became a free man that day…’. While “Wildfire” is as experimental as ever, with former frontman of Family Force 5 Solomon Olds being a co-writer; as Crowder relays to us the notion that wildfire from Jesus set us free from sin. It’s a bit from left field to hear Crowder half-screaming in the chorus, yet I am sure that this song will grow on me in the future.

One of the most progressive, experimental and encouraging worship artists ever; Crowder continues to play his music in an era without the DC*B, and here’s hoping that there are many more albums in the future from the talented singer/songwriter. Even if bands break up, their music can still impact, and Crowder has reminded us through his first and second solo albums that a band break up isn’t gonna hold him down. In fact, I reckon he’s just getting started. So what are you waiting for, pick up some Crowder (“Red Letters/Wildfire” single and/or “All My Hope” single and/or American Prodigal and/or Neon Steeple), and let’s have a party with some banjos and harmonica, shall we? Maybe with some Steve-3PO as the drummer as well!