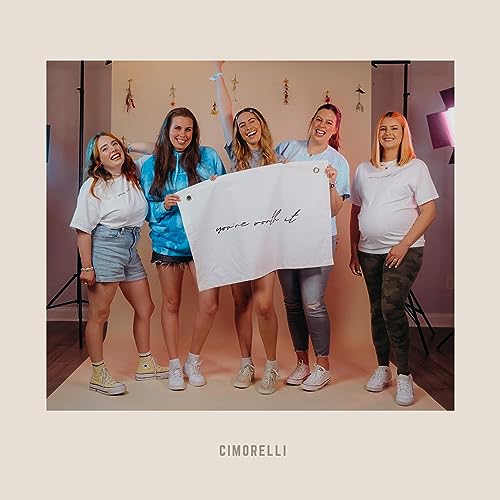 We’ve listened to a lot of Cimorelli over the years. And if you’ve been perusing our site for quite some time, you would’ve noticed how much this band has influenced our love of girl groups, mainstream music, and the rest of it. If it’d have to be one band to have influenced the music diversity and variety that my brother and I would listen to, then I reckon it would be Cimorelli. As much as artists like Carman and Delirious? solidified my faith when I was younger, and how artists like Steven Curtis Chapman, Tim Hughes, Matt Redman, Steve Grace, Newsboys, Rebecca St. James, and Michael W. Smith, all were instrumental in challenging my own perception of how CCM looked like and how widely unique the whole Christian music genre really was, I think it was this sister group from California that really reminded us that it’s ok to enjoy and love mainstream pop music, while still maintaining a personal faith, and enjoying Christian music as well. If you want to know our own journey that we as brothers had, during the days when we explored Cimorelli and their music all those years ago; check out my blog that I wrote about Cimorelli back in March of this year, where I discussed the band’s importance, influence, and necessity in a music industry that is ever changing. For a band to start off on youtube; and gain a following and succeed from the digital space, is something unique and profound- yes, they did have their record label stint from 2011 – 2015, but all in all, Cimorelli are an independent band. With the sister group releasing inspirational and heartfelt videos every Saturday, they also are involved with a podcast (The Cimorelli Podcast), while also giving fans a closer inside look at the band through memberships tiers via patreon. With that all being said, this group is still on the rise- with these sisters ranging in age from 31 – 23, sky is definitely the limit for these girls.

If you haven’t really listened to the band, then I reckon you ought to start off with albums like Up At Night or Alive. If you are all across this powerful sister-group, then you, like me, were excited when the band announced that they would be re-recording one of their most popular hits, ‘You’re Worth It’, calling it ‘You’re Worth It (2021 Version)’, in time for a ‘You’re Worth It Week’ (a period of a week where new merchandise from the band was sold at a ticketed price) that was this past week. The song itself debuted originally in 2014; and was part of the 2014 EP Renegade. One of my favourite songs from this group in…well, ever; Christina, Katherine, Lisa, Amy and Lauren have managed to create a hauntingly refreshing and emotive updated version of their already powerful hit, and even though it seemed a little different with no Dani present (their youngest sister, Dani, left the band in the beginning of 2020), ‘You’re Worth It (2021 Version)’ is still compelling and poignant, as the song itself speaks about us being worth it, because of this intrinstic value that we have as people, rather than it being based upon performance. Knowing that these sisters in this band have a strong, committed, Christian faith brings so much more meaning and understanding to ‘You’re Worth It’ the song- we see the sisters offer up an anthem of declaration, as we are told this pertinent, profound and life-changing truth- that our worth ought not to come from external validations and outward appearance, that who we are as people, and our character, that we are unconditionally loved by the God of the universe, that He fearfully and wonderfully made us as unique as we are (with all of the things that we may believe are ‘useless’ about ourselves), even the fact that God loves us enough to reconcile us back to Him through the way of Jesus dying on a cross, and rising again three days later; is reason enough for our intrinsic value. We are loved, we are treasured, we are sons and daughters of God. And that will never change. And that is reason enough to believe that we are worth it.

‘…“You’re worth it” means that no matter who you are, where you’re from, what you look like, what you do, or what has been done to you, you are inherently valuable as a human being. You are worthy of love, care, and respect. There is nothing and there is no one that can take that away from you. We hope these pieces can be a small reminder that who you are at the core is someone who is worthy of love…’
‘…“You’re not a copy; you can’t be replaced,” is a line from our song You’re Worth It.
We spend so much energy trying to cover up our “flaws”. Whether it’s the spots on your face, uneven skin tone, “messy” natural hair, having fat where it’s “not supposed to be”, cellulite, stretch marks, dark circles, or body hair… we try our best to cover up. And if we can’t cover them up in real life, we do it with editing and filters so at least people online won’t see our imperfections. It seems like there’s only one beauty standard- only one “right” way to look, and if you don’t fit that, you’ll never be beautiful. But when you erase the things that make you different, you start to erase your actual self. It’s almost like we’re all just wearing a costume and playing a part. We’re all trying to look the same until we don’t even know what we like or who we even are anymore. Your flaws don’t make you unlovable. They don’t make you ugly. They don’t make you less valuable- they make you YOU. The exact way that you are is unlike anyone else on this entire planet. That is so special. Don’t erase your unique self by trying to look like everyone else. You are NOT a copy, and you can NEVER be replaced…’

It is in these two quotes above, that I’m reminded that this song is a great reminder of God’s never-ending love for each of us. We are called and we are loved, we are beloved and in us being loved unconditionally, we cannot help it but pursue righteousness, grace, holiness, and truth, but only when it’s from the inside-out. When we have a heart transformation and realise that we don’t have to do anything to accept this grace, worth, value and unconditional love from the Father; then everything changes. Cimorelli may have been aluding to how our Father in Heaven sees humanity through this song, but even if this meaning wasn’t their real focus, I’ve been reflecting upon the song in general, and am in awe of how I firmly believe God can use this track for redemption, hope, healing and reconciliation, as we come to a moment in our own lives where we can see these circumstances and situations for what they are- an experience for us to go through, so we can have empathy and connect with people that are also going through the exact same things. Yes, we don’t necessarily want difficulty and trials in our lives, but in that same token, we ought to be still thankful for our own experiences, because in living what we’ve been given, we can have our own perspectives, and be in a state of humbleness and gratitude for the times in our lives where we are good and ok. For if we only experience the highs, how are we going to be refined into the people that we know the Lord wants us to be? If we only experience the good bits, how are we going to empathise with people that are always amongst the difficulty? It seems like Cimorelli have had quite a journey for ‘You’re Worth It’ to have such an impact (even back then) as it did…and still does. We cannot see a song created like ‘You’re Worth It’, which has been given a poignant video way back in 2014, and re-recorded again with an equally emotive video, and say that it isn’t one of the most impactful songs we’ve seen within the last decade or so. Because it is.

Call it what you like, whether it’s the Lord’s Spirit on this song, or some other divine intervention, but what I do know is this- ‘You’re Worth It’ is a great song to hear if you want to believe you’re worth it. But I guess an even better way, is to go back to some Bible verses, that maybe inspired this song as a whole. However which way you can look at the song, either as an inspirational Biblically profound track, or as a self-help melody, ‘You’re Worth It’ has been used by the Lord to impact and challenge people over the years, myself included. It’s a song that’ll continue to be on repeat in any Spotify playlist, and a song that can hopefully be recognised by a lot of people, as being possibly God-breathed. Who knows, maybe some CCM artists could cover this song in the future…that would be pretty unique and exciting, don’t you think? Well done Cimorelli for this impactful and powerful song. Loving the new 2021 edition of it; hoping and praying that the Lord continues to use this song as a way of reminding people that we shouldn’t strive and believe that we can do thing and earn favour in our own strength. That the grace that we’ve been given is unconditional- we don’t have to do anything for us to be loved wholeheartedly and completely. And that, my friends, is reason to declare ‘you’re worth it’, as many times as we like. Well done Christina, Katherine, Lisa, Amy and Lauren for this emotive track. Praying that new original music comes, within the upcoming weeks and months ahead!