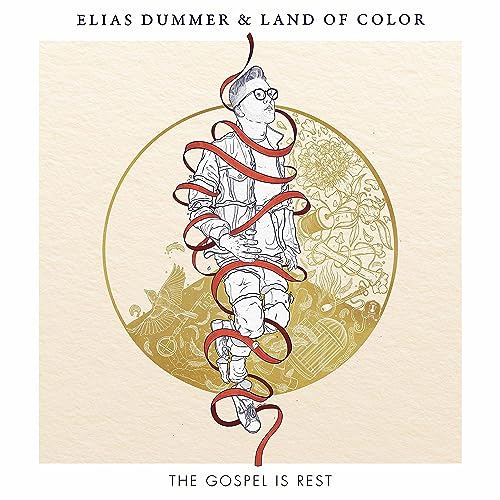 When The City Harmonic disbanded in 2017, I was a little disheartened- I’m sure they all had their reasons for everyone going their separate ways, I respect that, but just as I felt with All Sons and Daughters and how their split was seemingly unexpected, here I was witnessing the very exact same thing- The City Harmonic parting ways, only for lead singer of the band, Elias Dummer, to venture out on his own to create a solo album in early 2019. And while people can have their theories all they want about why this band broke up, and why that band did as well, but the truth of the matter is this- bands are only around for a season in life. They do break up, some do it albeit in a shorter time frame than we ourselves even realise, but nevertheless, what The City Harmonic had, and what Elias continues to have, are songs of hope, poetry, heartfelt poignancy and justice, as songs like ‘I Have a Dream’, ‘Mountaintop’, ‘A City on a Hill’, ‘Manifesto’, ‘Honestly’ and ‘We are One’ (to name a few) have shown us a different side of corporate worship than the one that we may have seen ourselves. As 2019 rolled around, Elias offered an EP to us in the form of a solo ‘debut’ called The Work, Vol. 1, comprising of worship songs for the church. It is true though, that worship is an everyday life activity, rather than just a transactional experience that people often partake every Sunday, nor is it a genre of music. Worship is so much more than what we as Christians in Western society have reduced the word to, and thus, Elias’s first album was in some ways, a revelation, and a realisation that worship is far bigger and grander, far more reaching, and pivotal, than we can ever dream it could be. It is the work we do on a daily basis, the people we interact with, the songs we sing to our Father, the priorities we place over others, it is the overall daily existence we live, because if we boil everything down, it’s this- that worship is how we respond to what Christ has done for us. It can be through song on a Sunday, and it can be through music, but often, worship is expressed through ways that the traditionalist view (singing songs on Sundays) may find it hard to reconcile. And this is why I reckon Elias’s debut album was one that was needed amongst people who may find it hard to comprehend the concept of worshp in any other way than on a Sunday, as well as it was needed in society in general. Fastforward to 2020, and Elias released another new EP titled The Rest, Vol. 1, a reminder for us all to take time for ourselves, reflect on God’s goodness, and strive and worry less. A companion to listen to alongside Elias’s debut, we are called to rest in Him through these songs on the EP. Now here we are in October 2021, and upon the heels of his emotive and compelling song ‘Expectation’, comes another- ‘The Gospel Is Rest’, a collaboration Elias has undertaken with fellow-Integrity Music artist/band Land of Colour. Together with ‘Expecation’, these two songs form the basis of Elias’s upcoming EP The Work, Vol. 2, releasing TBA 2021/2022.

As Elias has always been known to deliver comforting music to soothe the soul, in whatever he, or The City Harmonic, has ever produced and released thus far; this is no different with ‘The Gospel is Rest’, as this song, co-produced by Elias himself, alongside Land of Colour and producer Brent Milligan (who produces music for Colony House and Crowder), shows this heartfelt acoustic melody being presented by Elias with such fervent passion and a way for us listeners to reflect alongside Elias, and possibly be reminded, maybe even prodded along the way, that rest is very necessary in this Christian walk of ours that we embark upon. ‘The Gospel is Rest’ the song, alludes to the story in the Gospels, where Jesus was visiting His friends Martha and Mary. When both these two sisters got wind that Jesus the Messiah was coming, Martha went to work straight away, wanting to impress the Saviour with a clean place. When Jesus arrived, Martha continued to be a ‘good host’ and tried to serve Jesus with such respect and reverence for her Saviour. While Mary sat at Jesus’ feet; and listened to the stories He was telling her. When Martha tried to confront Jesus about Mary’s lack of helping, and ordered Him to tell her to come help, Jesus reminded Mary of this very thing- that she was very anxious and troubled, and that Mary had chosen the thing that wouldn’t ever be taken away from her.

This story in the Bible (Luke 10:28-42) tells us of this thing called rest, and how the Lord values rest in our own lives ahead of the hustle, stress and worry that comes from trying to live a life of performance and wanting to please people (even God), with things and hoping that they are impressed at how much we can accomplish in any given moment. Elias, with this song, tries to counter this notion of ‘busier is better’, and gives us such a revelation, that God doesn’t necessarily want our busy schedules, but rather a willing heart to listen to His promptings, and to work smarter and out of a heart that is rejuvenated, that will indeed naturally come through rest and posturing our heart to align with what He longs for us. In this time of COVID-19, Elias’s song cannot come at a more opportune time for us. We need rest more than ever, especially if we want to navigate the worry the comes along with all the news that we see, and the expectations people place upon us, about how we’re supposed to live within this COVID-19 pandemic. It’s ok for us to have a rest from time to time, and to be still and be at peace in the midst of struggles and worries that will always be there tomorrow. A song that can hopefully encourage us to be more like a Mary than a Martha (because Jesus is less impressed with the perfection of it all, and more so, with us being humble and admitting that we need rest sometimes), and as we continue to navigate COVID-19, may this song encourage us to rest in seasons of rest, and to work and grow and harvest when we know it is right to do so. Well done Elias, for this heartwarming and poignant track. Another EP/album in the future? Who knows, only time will tell.

‘…Let’s face it, many of us are tired; we’re addicted to worry; and we’ve got the weight of the world on our shoulders. If there is true rest to be had, we need it – I need it. We often act like worship is this thing filled with bravado and bluster. This isn’t that. ‘The Gospel Is Rest’ is a simple, prayerful recognition that sometimes we’re just tired people still learning to let go. As the world struggles through one catastrophe after another, this song has continued to hit me hard over the past year. Also, I really love Land of Color’s music, so this just seemed like the perfect opportunity to come together on something we all believe in…’