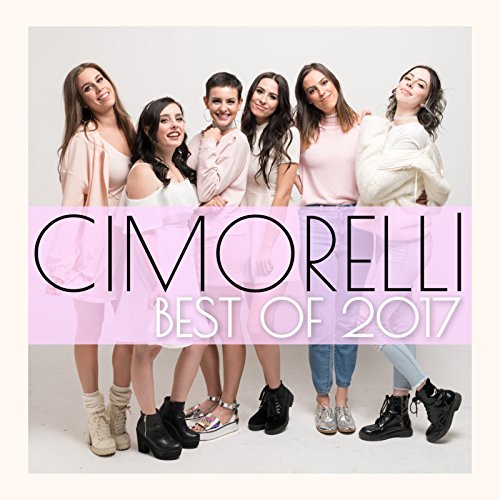 Ever since Cimorelli, six sisters originating initially from southern California (and now residing in Nashville, Tennessee), released their self-titled EP in 2008 ten years ago, it was going to be a wild, unique and emotional ride for these 6 young women. Maybe even more wild and interesting, unique and exciting than they themselves could even have realised, way back when they released their first EP coupled with their first cover, Miley Cyrus’ ‘Party in the USA’. Fast forward 10 years and what I have to say is this- the six sisters of Cimorelli- Christina, Katherine, Lisa, Amy, Lauren and Dani, have become a household name over the years, as they have steadily released both EPs and albums, both covers and original material, as they years progressed. And now 5 EPs, 1 mixtape, 3 albums, 1 Christmas compilation and 6 cover albums later (all within the span of 10 years, that’s a feat in and of itself), we see Cimorelli release Best of 2017, essentially a covers album that compiles songs released throughout the year where Cimorelli showcase some of the biggest mainstream songs of the year; and place their own spin on them. Essentially similar to their BEST OF ___ albums of the past (2010-11, 2012, 2013, 2014, 2015 and 2016), of which I reviewed for this site right here.

I’ve said a lot about Cimorelli’s background as a band in reviews past (reviews of Sad Girls Club, BEST OF 2010/11, 2012, 2013, 2014, 2015, 2016, Alive), so to write yet another background of a band that is currently one of the most unique groups currently that is using their youtube and digital media presence to influence and impact young people’s lives around the world; may seem a little redundant. What I will say is this- Cimorelli and me listening to their music throughout the last few years has increased my interest and piqued my curiosity for mainstream music- as I now know that mainstream music isn’t as ‘bad’ or ‘evil’ as many, if you will, ‘fundamentalist Christians’ say. In fact, and this could be considered ‘heretical’ by some, God can even use the most ‘mainstream’ song, full of swearing and everything else, to bring people who are seeking closer to Himself. And I truly believe that. And so, Cimorelli are doing just that with their music. They are indeed very passionate and fervent about their own personal faith, every one of these 6 sisters. But in a technical sense, Cimorelli is not a Christian band. Just like how in bands like Switchfoot, needtobreathe or Skillet, each of the band members have an on-fire-for-God faith, but their music influences and impacts more of the mainstream arena more than anything else. Enter Cimorelli into that group as well, I reckon.

From releasing their first debut full length album Up at Night in 2016, which was heavily country-style and relationship focused, as well as releasing a quasi-worship/motivational album Alive at the end of 2016, to their most recent album Sad Girls Club, which is very much a pop-infused ‘life’ album; Cimorelli cannot be placed in a box, quite literally. Musically, their styles can shift between pop, country, radio friendly and even inspirational and worshipful as their discography shows; which is why I am asserting my claim, that Cimorelli and the music that they deliver, be it covers or original material, are some of the most unique that I’ve heard in a long time- with such great harmonies from all the 6 sisters in the band, we have been blessed to hear what I reckon is one of mainstream music’s (and Christian music as well) best kept secrets…until now, of course. With Cimorelli being, I reckon, one of the artists/bands that have excelled in the last few years because of their youtube presence (through weekly postings and cover songs, alongside devotionals, interviews and the like) and their ability to connect with fans across all platforms of social media; Christina, Katherine, Lisa, Amy, Lauren and Dani, are indeed changing the world with their heartfelt music and the ability for such a band of 6 sisters to deliver a real, genuine comrade, sibling bond and friendship when it comes to delivering music that can be as much fun-filled as it is emotive and hard-hitting. Needless to say, Cimorelli, whether recording their own original material or their covers, give everything their all, as evidenced in all the videos that can be seen on their youtube page. The fact that Cimorelli have been able to bridge the gap so cleverly between mainstream and Christian music, makes me appreciate and admire these young women, all of which have a fast-growing and respectable career in front of them, be it as a band together or even, shudder to think, solo, if one person in the group decides to venture out on their own.

Which brings be to Best of 2017. No, this is not an album full of original material, leave it to Sad Girls Club, Alive and Up at Night to showcase their songwriting skills. No, this compilation of a whopping 27 tracks (the longest track listing of a BEST OF compilation by these six sisters!) are all covers…and good covers too. Not that I’ve heard any of the originals though (then again, maybe I’ve heard some original songs here and there), but the point still remains- that if I didn’t know that these songs where in fact covers, I’d initially would’ve thought that the band would’ve written these songs themselves- that’s how professionally done and recorded these songs really are. The band itself have always prided themselves in delivering quality content for the whole family to enjoy (and they’ve done so for 10 or so years), and Best of 2017 is no different. While some original songs have been littered with expletives that aren’t that suitable for younger audiences, what these six sisters have done was to record the tracks, but to re-write and re-sing the parts that are questionable. While many die-hard fans of the original songs may find these alterations on the compilation to be a little dis-heartening, let me remind you, that Cimorelli, though not an official Christian band, all have members that are strong in their Christian faith. And so, if they are changing the lyrics for whatever reason, then that is ok. Because, if I am to be frank, the band’s influence amongst the younger generation into what is positive, hopeful and encouraging is very great. So if this compilation, that isn’t full of words that shouldn’t really be heard by the target audience (whom I reckon is teenagers and young adults, from both genders…but primarily girls), encourages them in their own walk in life, and even encourage them in a unique and weird way in their walk with Christ; then this compilation album has done it’s job. And done its job, the Best of 2017 has!

So what can I say about Best of 2017, amounting to 27 tracks worth? Just that if you are a fan of Cimorelli’s music, a fan of mainstream music over the years, a fan of the band’s arrangements of popular pop songs in previous Best Of albums, and have been a fan of Cimorelli for years, then stop whatever you are doing now and check out this music compilation on Spotify (or if you are the paying type, purchase it quickly on iTunes and listen right away). This collection of 27 songs are a snapshot of Cimorelli year of 2017, many of these songs have been charting on mainstream radio over the year as well.  A must have for anyone who has been wanting to hear something different compared to whatever original version we may have heard on the radio, we have a glimpse into the songs and artists that have been on the radio a lot during 2017- Taylor Swift’s ‘I Don’t Wanna Live Forever’, ‘Ready for It’ and ‘End Game’; for KING AND COUNTRY’s ‘Priceless’, Lauv’s ‘I Like Me Better’, Logic’s ‘1-800-273-8255’, Sam Smith’s ‘Too Good at Goodbyes’, Kesha’s ‘Praying’, Selena Gomez’s ‘Bad Liar’ and ‘It Ain’t Me’, even a parody of ‘Bad and Bougee’, and throwback songs ‘Africa’ (originally by TOTO), ‘Wannabe’ (originally by the Spice Girls) and ‘Girls Just Wanna Have Fun’ (originally by Cindy Lauper) are all present on Best of 2017– songs that have been big either on social media or on mainstream radio in years past, and songs that I, if I hadn’t heard of Cimorelli, may not have actively looked and heard these songs. Which gives rise to this- that Cimorelli and their ability to transform a song and make it their own will have tremendous impact on whomever hears their music and wants to branch out into other music depending on the songs they cover.

Best of 2017 is an album of covers, but it is in the delivery of the songs and the ability of these six sisters to take songs that aren’t their own and place a ‘Cimorelli’ stamp on it, that I reckon will allow the band to continue to new heights in the upcoming months ahead. Cimorelli and their commitment to delivering quality music, be it covers or originals, has taught me that there is a wide variety of music out there at my grasp, and ‘mainstream’ music isn’t that ‘bad’ or ‘inferior’ to Christian music. In fact, God can indeed speak through anything, even a song that wasn’t necessarily written with Jesus at the forefront. Mainstream music can encourage, and Cimorelli has shown us, myself especially, that mainstream songs, even popular ones like those included on Best of 2017, can in fact help us on our journey of life, and tell us more about ourselves and God in the whole process of this crazy period from birth to death, called an exciting adventure the Lord is calling us all out to participate in. My musical tastes have been broadened because of Cimorelli, and for that I am thankful and grateful. Music is the universal language of the soul, and as these 6 sisters continue to deliver harmonies and melodies as emotive and poignant as they have been for years, then the world will be a better place because of it. Best of 2017 is not just for anyone who loves current radio friendly pop music. It is for people who love music, full stop. Cimorelli are underrated, and hopefully with this compilation release, alongside their most recent album Sad Girls Club, we can see the journey of how a little youtube cover band can be transformed into a band that is influencing many young teenagers and young adults (especially teen girls) around the world to this day!