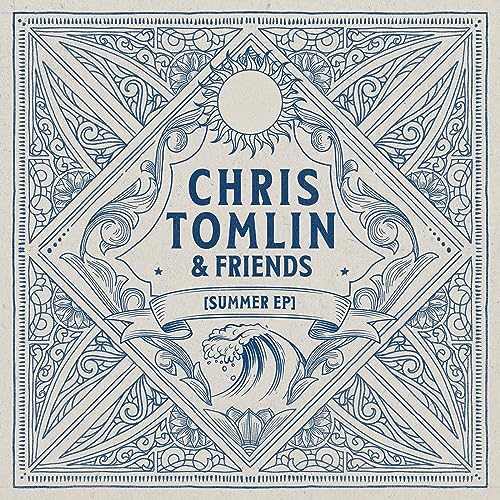 When you’re Chris Tomlin, and you’ve seemed to have conquered everything- sold our tours, hit number one songs, and a country influenced album that has impressed critics and fans alike… what is next? Given that the pandemic is still going, and that concerts are just starting to come back up again, albeit with a continued presence of social distancing rules and regulations; I guess the next thing you do if you are Chris, is to release another volume of Chris Tomlin & Friends. Now I had high hopes for this EP, simply because I loved the previous album released last year (of which you can read my review right here!); but unfortunately… this project falls flat extremely. With 2 out of the 5 tracks being double ups (something that I thought that only the WOW Hits series would stoop so low to do!), and 2 of the other 3 remaining new tracks being under 3 minutes each in duration… there’s very little here for me to be excited about this project, especially since the lyrics are extremely lazy.

Both “Sing” and “Thank You Lord” with Russell Dickerson and Thomas Rhett respectively (and both songs with Florida Georgia Line!) were alright songs on Chris Tomlin & Friends, but they weren’t my favourite. So I am indeed perplexed as to why they would show up on this EP even if double-ups were accepted and commonplace. Wouldn’t a better song to promote again be “Chase Me down” with RaeLynn, “Power” with Bear Rinehart, or even the current radio single “God Who Listens” with Thomas Rhett? Not to say “Thank You Lord” or “Sing” aren’t great… it’s just that there are better songs out there from the album that could’ve easily been chosen as representatives for this EP. Although I’d say all new tracks would’ve been better from Chris, or even these three new tracks added onto the album from last year along with other new tracks like acoustic versions and remixes? That would’ve been so much more impressive than this, half-hearted backyard project thingy!

As for the new tracks, all of them are ok… but only ok. The piano prominent “Good To Be Loved By You” has a rather repetitive chorus as well as cliché verses… but radio would eat this up, no question. Tyler Hubbard from FGL and Chris sing well in harmony together… but the lack of explicit ‘Jesus’ and ‘God’ references, will be sure to irk many conservative Christians. Though as the two singers emphatically relay to us that ‘…it’s good to be loved by You, though my brokenness has seen some days, Your mercy’s still brand new…’, the passion cannot be denied here, and the track nonetheless brings a smile to my face, with the knowledge that Chris is singing for the Kingdom of God, in a music market that isn’t historically known for overt songs about Jesus. “Talk To Him”, with Russell Dickerson, is as musically bland as anything I’ve heard this year, and even though lyrically the track comes from the right place and the heart is there; I cant help but tune out by how lyrically simple it is. Sure, we can talk to God about our problems… but what about being a bit more specific about what those problems are and could be, in order to sing directly to the fans a bit more rather than a blanket song that covers everybody? “Love People”, with Jimmie Allen (who sings on his own for approximately 10 seconds out of an already short 2 minutes 20 seconds!), could’ve easily been sung on mainstream country radio, and it’d fit right in. Isn’t that a travesty, as God’s name isn’t proclaimed as often as I think it needed to be? Obviously this song is speaking about God’s unending love rather than the world’s definition of love- because I know Chris’ heart and intentions. But for the common person on the street, would they know this was a Christian song? I don’t think so, and this type of blurry lines here has me slightly perturbed.

Could Chris Tomlin go full country in the future? He’s definitely got the voice and style for it, that’s for sure. Will there be a Chris Tomlin & Friends Vol. 2 (full length album) in the future, and not this half attempt or whatever it is? Most definitely, I think there should be! And maybe Chris’ guests shouldn’t be confined to the country music industry next time around? How about other artists who are Christian like Tori Kelly, Justin Bieber, Jennifer Lopez, Selena Gomez, Maddie & Tae, Jon Foreman, Jordin Sparks, Hunter Hayes, Lindsay Ell, Carly Pearce, Echosmith, Marc Martel, Gwen Stefani, Blake Shelton, John Legend, Kelly Clarkson… the list is endless for artists who could collaborate with Chris for potential volumes 2, 3, 4 etc. That would be cool, don’t you think? So, now that we can see this EP as a ‘nothing’ type of album that perhaps is like a money-grab? The question still remains- will all of these artists go on tour with Chris when it is safe to do so for a Chris Tomlin And Friends Tour? A potential live CD or DVD? The possibilities are endless here, and now that the whole public know about the faith of many of these country artists whom we never had any idea before; how about some more genre crossovers with the other artists in the future? As in FGL or Thomas Rhett or RaeLynn could release a worship album under their own name in the future? Still there are some worship purists and Chris Tomlin purists who would hate this album purely because Chris is recording with artists who do not publicly glorify Jesus in their own music, and do not record Christian music. For those people, I guess I’d say that we do not know the heart of a person, and only they and God know. So personally I’d give everyone the benefit of the doubt; and coming from that standpoint, Chris Tomlin & Friends is one album for the ages. Chris Tomlin & Friends: Summer EP? Eh, not so much. But will Chris Tomlin receive awards for his country album at both the Dove Awards and the CMA’s? Possibly, or maybe not. But awards aren’t the main focus here. The main focus is the music and the songs that we can use to sing to Jesus and worship Him. And while it’s a fact that Chris probably will never top Arriving or Hello Love; this album comes pretty close. So what are you waiting for? Do you want to hear Chris like you’ve never heard him before? Then the full length album from last year is for you! Bypass this EP though, you’ll thank me later!