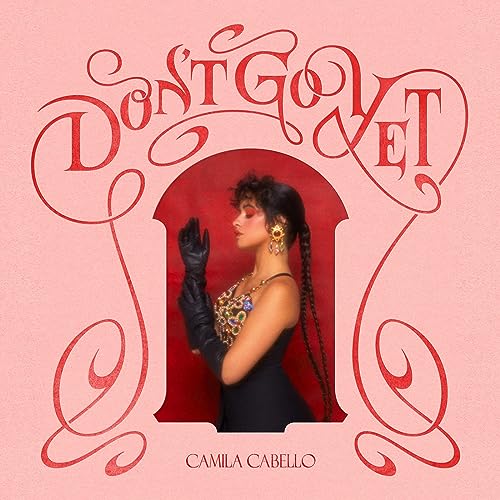 When Camila Cabello left girl-group Fifth Harmony in 2016 to embark on a solo career… I’d say that probably long-time fans were betrayed, angry and disappointed. Later on the group dissolved in 2018 as the remaining 4 members wanted to venture out and record solo albums… but was Camila leaving a driving force in the group splitting? I wasn’t a fan of Fifth Harmony nor Camila back then (and I’m still not, although objectively Camila as a solo artist and Fifth Harmony as a short-lived band are way too popular for me to be putting my head in the sand about them any longer!), yet I for one know when someone comes along who is just special in their craft- and Camila is one such an artist. It’s a shame that Fifth Harmony split, and I’m sure Camila leaving was a factor; but what we now have presented to us within the past few years, is Camila’s debut album Camila, her sophomore album Romance, and now her latest single “Don’t Go Yet”, from her upcoming third solo album Familia. One of the many artists who just missed out in our blog series of ‘influential artists of the next 5-10 years’; Camila’s prowess as a songwriter and as a singer simply just keeps on rising and rising and rising. If you are unaware of any song from Camila (and really, I reckon we’ve all heard “Senorita” probably more times than we can count, or more times than we’d want to admit!), then can I say that “Don’t Go Yet” is one of the most energetic, moving, and poppy songs from Camila yet? If you’re not sure where to start in listening to her music (because her music is undoubtedly bright and sunny, and we all could use ‘sunny’ in the midst of COVID-19 and more deaths and more hospitalisations!); then I’d say “Don’t Go Yet” is the best place to start.

I want it to be that kind of family affair selfishly, because it would make me happy. It would make my life better and that’s what I want, so that’s really what I was trying to manifest with this whole album. I think ‘Don’t Go Yet’ is just sonically and melodically just me being free. I think being in Miami for so long and having more family around me and speaking Spanish more just kind of brought me back. I think my roots went deeper in a way that I really needed. I was just like, ‘I just want to connect today with the people in this room.’ And I think that really showed itself in the music. I think this was a chance for me to really consciously work on and invest in what I think makes me and human beings truly happy, which is your relationships and your connection to the people around you.

Essentially, the entire vibe of the song “Don’t Go Yet” is like a party. With the music video being extremely picturesque and featuring Camila’s immediate and extended family and friends having a blast, the track speaks about the persona wanting their partner/lover to stay with them and ‘don’t go yet’. It’s a song whereby one person is begging the other not to break up with them or maybe not to move to another country. However, the beauty of songs in general is that different interpretations can exist for different people, and because this song is from Camila’s upcoming album Familia; perhaps the track can be interpreted in the way of Camila wanting to spend more time with her family? At least that’s the way I interpreted the song…

The album’s journey started with Scott Harris and our makeshift studio in my bedroom in Miami about a year ago. We just had a mic, some MIDI keyboards and guitars! Then we brought it to LA where I met and worked with Mike Sabath for the first time. That first day of working together, we wrote this song after listening to old Cuban songs and playing with my dog Tarzan. Then Ricky Reed (who side-gigs as my therapist sometimes LOL) put his sauce alllll over it. These guys have become my true friends and we created a really loving and inspiring creative space. This whole album to me was inspired by two things: family and food. Your family by blood, but also your chosen family. Who you want to break bread with. Who you want to sit at the dinner table with, cook a meal for, get wine-drunk with, and dance in the living room with. To me, those are the moments that make me glad to be alive, those moments of collective joy and true vulnerability and connection with other people. Moments where the food you cooked together feeds your soul and so does the laughter, conversation, and emotional intimacy. I hope you enjoy it and I hope it inspires many wine drunk kitchen dance parties for you and your familia.

I’m not an avid Camila Cabello fan. I can appreciate good music and that’s why I’m keeping an open mind as to how God chooses to speak to me. However, the energy, passion and joy evident on “Don’t Go Yet” has me intrigued and even excited somewhat for Familia. I guess you could say it’s the start of a new chapter for Camila (maybe it’s the start of a new chapter for everyone’s first album post-COVID-19!); and with Camila sure to be present on everyone’s lips when they see her on screens in the upcoming Amazon Prime original film Cinderella, “Don’t Go Yet” ensures that this earworm will be in our heads for a long time, and Camila will be someone we’ll be talking about during the upcoming months, and maybe years. Well done Camila for a celebratory pop song that will be present on my Apple Music and Spotify playlists for a while yet! And I’m sure this song will be present on the playlists of many other listeners and fans! Now… who reckons I should check out the individual careers of the rest of Fifth Harmony?