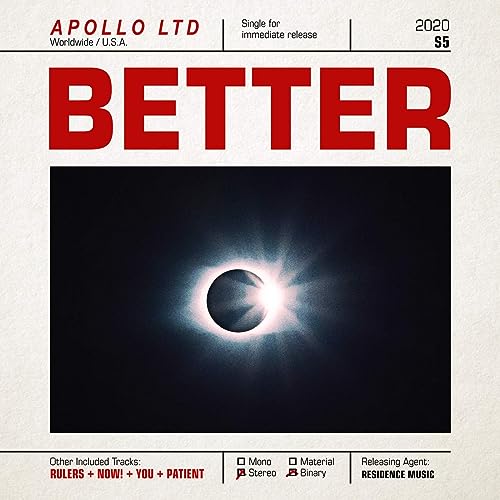 Apollo LTD, comprising of Jordan Phillips and Adam Stark, are one of the many bands to sign to Centricity Music over the past few years; and for me personally are also one of the very few artists to release a debut album over the last while that has truly grabbed me and impressed me from the word ‘go’. That’s not to say that other artists who released a debut album this past year or so haven’t wowed me at all. Artists like Mallary Hope, WANDE, Mickey Guyton, Chris Rezema, Lydia Laird, We The Kingdom, Sean Curran, Battledrums, Gabby Barrett, Mac Powell and The Family Reunion, Caylee Hammack, Brandon Lake and Kalley have all unveiled debut albums/EP’s that impacted and impressed throughout the past couple of years in my opinion; but I guarantee that one listen from the duo will have you agreeing with me- that Jordan and Adam have delivered probably the most ‘complete’ debut album from this past couple of years- a high quality album in Out Of Body full of both soaring ballads and high octane poppy tunes; while also staying relevant lyrically to current issues in today’s society. With the duo meeting in 2004 as roommates in university, the band’s name was derived from NASA (with Jordan’s uncle an astronaut in the 90’s), and the concept of doing something musically that has never quite been done before; Apollo LTD created 13 tracks of pure genius, as they attempted to make sense of the world we live in through the only way they know how- through the power of music.

Initially I thought that Apollo LTD was a one-man band from Josh Engler (frontman of Abandon!) because these guys sound so, so similar to him- however I was later on mistaken as I searched online for more about the group. Jordan and Adam are on the contrary quite popular in the mainstream media- as I found out that the band have shared the stage with the likes of high profile mainstream acts such as Panic At The Disco, All American Rejects, Ke$ha, Andy Grammar, John Mayer, and DNCE. With their music also being featured on national ad campaigns for Lowes and Verizon Wireless as well as in TV show Grey’s Anatomy and numerous CW and MTV shows; both members have a strong sense of Christian faith, and they indeed are currently walking the same, or at least similar paths to artists like Switchfoot, Needtobreathe, Skillet, Relient K and Mat Kearney to name a few. The duo recently unveiled their latest single “Better” (essentially an EP containing the songs “Patient”, “Rulers”, “NOW!” and “You” as well!)- the title track itself being a radio friendly poppy mid-tempo ballad and essentially a prayer to God, letting Him know that we all need assurance that ‘…it’s getting better, a little light so I can see, say the words so I remember, say it loud so I believe, I need a little hope for the hell in my head, to get me through the storm, ‘cause it ain’t done yet I need it more than ever I need to know it’s not forever…’; so let’s dive in to see how the new single/EP release lives up to the duo’s already impressive repertoire and reputation.

Immensely radio friendly and comprising of a catchy electric guitar riff; “Better” is a solid track, but not as compelling and catchy as “Patient”! With the track being still confronting yet comforting at the same time; Adam and Jordan eloquently relay to us whenever things are hard, we do need reassurance that things will be better in the end; and as we ask Jesus to give us peace and comfort… well then I reckon we’ll be able to live life at its most freest! With “Patient”, “Rulers”, “NOW!” and “You” being the other tracks on the EP, this EP is a must for fans of the band and also for listeners who haven’t heard of Apollo LTD before!

Originally back in late 2018, “Gold” encouraged me to remember that Jesus makes everything around shine brighter; and has also encouraged me to check out the rest of Apollo LTD’s discography. Now that Out Of Body has released as well as the new singles “Better”, “Patient”, “You”, “NOW!” and “Rulers”, these songs have further cemented my positive stance on the band, and I’m definitely a fan of these guys for sure. While only time will tell what kind of songs Apollo LTD record next on their full length second album (slated for release in early 2021- and I’m hoping all five of these singles will make the list!); I am very intrigued and quietly excited, and will definitely check out the rest of their discography. So what are you waiting for guys? These guys have your anthems for the whole of 2020 sorted, even if you don’t believe in Jesus yet! So let’s get started, and let us all remember that we can know that there will be better days ahead, because we know that our God is always with us and will never leave us!