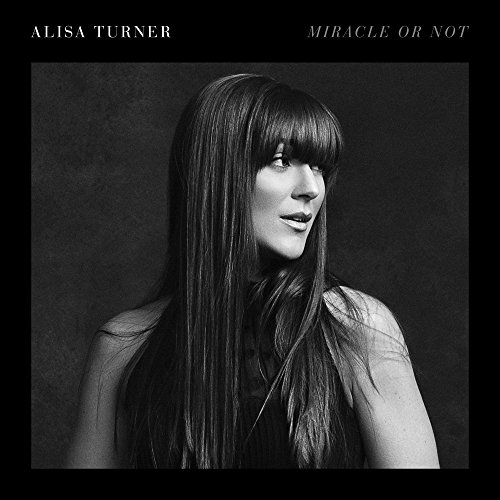 “…I want this record and these songs to remind people that everything He has ever dreamed for you is still in the works. This is a moment. Hopefully, it will pass while we are on this side of eternity. Just put one foot in front of the other, however that looks, however small of a step it may be, and you just keep going. You keep going, and that is part of being hopeful, and having faith, and believing and trusting that He is who He says He is…” Recently signed to Integrity Music, singer/songwriter and worship leader Alisa Turner has not had a picturesque or easy road to success. From suffering a debilitating illness (Lyme disease) and trying to overcome that, to losing her infant son, and all of the emotions that come with that devastating ordeal, to being so close to signing with Gotee Records, and that deal falling flat; Alisa’s life is anything but normal. Yet instead of shaking her fists at God and proclaiming that He isn’t who He says He is, Alisa turned to Him, believing that God is still here and God is still faithful, even when she thought that her music career wouldn’t go anywhere. As the fruit of Alisa’s labours is now evident with her debut full length album Miracle Or Not, released via Integrity Music a couple of weeks ago; we are blessed to hear the evidence of God’s faithfulness displayed in these 13 heartfelt, personal, emotional, comforting and also confronting worshipful ballads and anthems, as Alisa forges ahead, and walks the path God has paved for her, while also drawing more and more people into the Kingdom.

Alisa’a debut single “My Prayer For You” (which, along with 4 other tracks, released in an EP last year!) immediately sticks out in my mind when glancing at the track list. Driven by stirring keys, Alisa’s declaration of hope, promise and encouragement is sure to brighten anyone’s day, as she fervently cries out, praying ‘…may God give you eyes to see, He’s still greater, courage to rise and believe He’s able, may God be your peace in the fire you’re walking through, this is my prayer now, this is my prayer for you…’– and this is definitely something we ought to strive to believe if we don’t already. Jesus Christ is indeed our peace in every situation, that He has given us eyes to see and the faith to walk out the prophesies He has laid out before us in our path. Though these are eternal truths that Alisa has spoken over us and are no less true if we believe them or not; Alisa proclaims them over us nonetheless and asks us to believe that it be true, so that our mindset is changed as we are worshipping God in every circumstances, knowing that Jesus is with us, in our corner no matter what. What a brilliant melody to impact the world; kudos to Alisa and Integrity Music for “My Prayer For You”.

The rest of ‘previously released tracks’ are just as poignant and compelling as Alisa’s debut single. Album opener is “Lift My Eyes”, co-written with Michael Farren, is re-recorded with extra drums and acoustic guitar, giving the track a greater depth; and is an earnest, honest and inspiring worship melody (is the chorus Scripture-In-Song?), driven by vibrant keys, as Alisa passionately reiterates that Jesus is the One who provides us our help and everything, that ‘…I will lift my eyes to where my help comes from, I won’t be afraid, I won’t be undone, You’re more faithful Lord than the rising sun…’; while the sombre, reflective and ethereal piano led ballad “Not Even Now” focuses on the unchanging truth that Jesus Christ is the same, yesterday, today and forever, and that Jesus is to be relied upon at all times, and to be declared faithful. As Alisa authoritatively highlights the fact that ‘…not even now are You defeated, not even now are we alone, not even now are You less than Almighty God…’, we are presented with the ever-true reality of God being constant, a notion that is desperately needed especially in this time of global political turmoil.

As Alisa delivers THE standout melody on Miracle Or Not in the hymn like piano prominent “As It Is In Heaven”, I’m certain that this will be a radio hit in the future and/or a staple on Sunday morning worship services in the coming months and years. As Alisa eloquently sings out God’s praises, she reiterates the fact that with Jesus in our lives, the kingdom of heaven can occur on earth right now, as she cries out ‘…on the earth as it is in heaven, let it be here with us right now, where your word is fulfilled and your glory revealed, let it be here with us right now…’. “Psalm 13” is the last representative from Alisa self-titled EP from last year, as the piano only 2 minute track is an almost word for word retelling of us surrendering fully to God, because Jesus has been good to us all of our lives. While we are also blessed to hear one other ‘recognisable’ melody on this 13 track project, and that’s “Safe”, which was previously released as a promotional single earlier on in the year. Driven by stirring and soft keys, as well as Alisa’s haunting and pristine vocals; we are met with an honest, vulnerable prayer where Alisa ardently and fervently relays to us that ‘…there’s no shadow, there’s no shame, no need to numb the pain, there’s nothing to explain, only Kindness with no boundaries, Mercy that surrounds me, Love that sings my name…’, and we are also glimpsed into the feelings and emotions that we all must go through, when analysing our relationship with God, the creator of the universe and our shelter, provider and Saviour. With Alisa creating a simple yet effective anthem that we can declare during times of trouble, and even in times of peace; this is indeed a hit melody for the ages, and one of my favourites of this year thus far!

There’s just over half of the album to go on Miracle Or Not and the best news is that it’s all brand newly recorded songs! Penned by Chris Quilala of Jesus Culture, and previously recorded and made famous by Kari Jobe, “Miracles” is quite a personal song for Alisa, as singing this melody passionately and confidently that ‘…I believe in You, You’re the God of miracles…’ in spite of her ongoing battle with Lyme disease is very bold and brave, especially if in fact God doesn’t heal her in the time frame that she would want. While the haunting, mysterious, yet also big, booming and grandiose epic worship anthem has Alisa fervently cries out that she believes in the God of miracles, that ‘…the God who was and is to come, the power of the Risen One, the God who brings the dead to life, You’re the God of miracles!…’, we are met with one of the most compelling versions of one of the most vulnerable and inspiring worship anthems I have heard in the past few years. While piano prominent and hymn-like duet “Only My Jesus”, with Leslie Jordan of All Sons And Daughters, vividly describes the notion that it is only Jesus that can and will be with us especially in the darkest of times, and it is only Jesus that deserves all of the devotion and dedication, despite harrowing circumstances occurring in our lives.

“…Songwriting is so connective. I know they [Michael Farren, Mark Alan and Lou Fellingham] wrote it [Miracle Or Not] for me, to help send me a message at such a horrifically low point in this past six months, and so it was a gift… a reminder that just because He doesn’t heal me, it doesn’t mean He doesn’t love me. Whether God heals me or not, He will not abandon me on this journey. He will not abandon you on your journey. He is always for you, miracle or not…”. With the title track being probably the most emotional and personal melody on the album, Alisa boldly proclaims that even if she doesn’t get healed by God, whether there is a miracle or not; Jesus still loves her, and that is the only thing that matters. Comforting and also confronting at the same time, the title track displays to us all a heart worn on its sleeve, and a faith so unwavering that it’s admirable and commendable- Alisa should be proud of herself recording such a stirring and near-flawless gem.

While “What A Day” is a grandiose celebratory Easter-themed big ball of joyous energy wrapped up in 3 and a half minutes, with both electric and acoustic guitar in the forefront, as Alisa fervently recounts to us that we can boldly declare ‘…what a day, what a day, when blood and mercy poured out saving grace, hear the roar, our thundering praise, all the saints are singing what a day…’; while “Louder” is ironically an soft acoustic guitar led ballad, with Alisa highlighting to us that she will keep shouting out the promises of God and the goodness of God high from the mountaintops and keep proclaiming His name louder and louder ‘…til the walls come down, ’til I see fear bow… til the darkness breaks with the sound of praise…’.

The Travis Ryan penned “Forever Holy”, standing tall at 6 minutes, is just as impressive as Travis’ original version from 3 years ago, as Alisa proceeds to gently and softly whisper (then boldly proclaim and assert as the song progresses!) in the piano led ballad “Forever Holy” that Jesus reigns forever, deserving all the praise, in spite of our own circumstances. God was, is and is yet to come, and He loves us very much, of which the extent of God’s love boggles the mind, and that should be reason enough to give God all the glory, a notion that can get some time to fully understand, but a concept that deserves to be thoroughly wrestled with. While the final ‘new’ melody is “Loved”, essentially relaying to us that we are unconditionally loved by Jesus Christ, no matter what we have done, or haven’t done, what we are doing, and what we are yet to do. What a marvellous concept, one that will also take a lifetime to fully grasp and understand, and a concept that I’m glad Alisa has taken the time to explore in her eloquently presented brilliant melodies! Well done Alisa for a compelling album, and a worthy full length debut.

“…this album is for everyone, but especially people who are suffering. It’s for those people who, at 2am, are at their wit’s end and need something to pull them through. If I can just let people know they are still loved, they have value and they still have reason to fight, that is what I have to do with every song, every word, every hug. And I’m a hugger. I hug you ‘til it gets uncomfortable and you just have to give in, settle and breathe…” What more can I say about Alisa Turner’s debut album Miracle Or Not? Alisa’s passion for Jesus and prowess as a songwriter and worship leader is one of the best in the industry right now, and this is wide open on display across all of these 13 tracks (12 if you don’t count “Miracles”, which is a cover!). So enough from me. Dive in, and listen to high quality worship leading and songwriting. Alisa’s new album is one of my favourite worship albums of 2018- Well done Alisa, I can’t wait to hear more of your inspiring, honest, poignant and worshipful future material in the coming weeks and months!

3 songs to listen to: Not Even Now, Safe, My Prayer For You