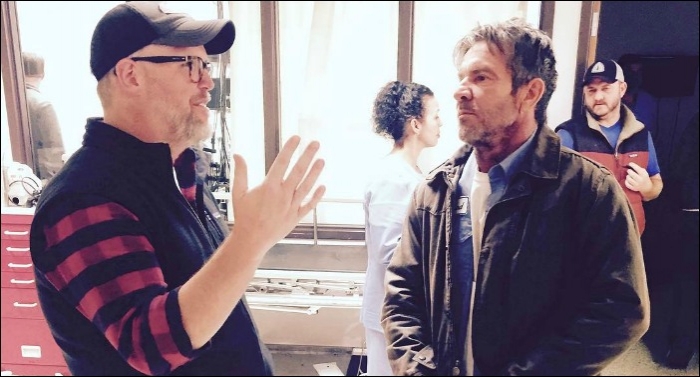 While it’s been a while since I have reviewed any TV shows or movies (in maybe about 3 years or so!); I have only reviewed music albums since then, partly because of the fact that for me it’s the easiest to write about, and also partly because my full time job at the café only allows for so much free time. Yet when the news arose in 2016 of a potential movie based on the hit song “I Can Only Imagine”, written by Bart Millard inspired by the relationship he had with his dad, and the first single of the band MercyMe, which is still popular and active today; I knew I wanted to review the movie. It didn’t matter that I hadn’t written a review of a movie since Where Hope Grows, I just knew that I Can Only Imagine would be one of my favourite movies period, and would change my life forever, so much so that I had to write about it in a review when I saw the movie. While I will be jumping in and expanding upon my love for MercyMe’s debut album Almost There in this week’s upcoming Flashback Friday’s post (and also my appreciation and awe of their song “I Can Only Imagine”, the most played song on the radio in CCM history!); let me persuade you to watch the film when it releases in a few days time. As this is a ‘First Impressions’ review, I won’t be writing a thesis (because I haven’t seen the film!) but I plan to watch within a couple of weeks, and then you guys can check back then to take a squiz at what I think of what will be one of today’s most inspiring and challenging films ever!

While I won’t bore you all with all the details of how the movie came about, nor the history of MercyMe (I guess that’s what google, your best friend, is for!), I will say that from the clips and interviews I have seen online, that this movie has gripped me so far like no other. There’s something about the song “I Can Only Imagine” that tugs at my emotions, my heart and my soul, and seeing how the song was written and recorded on screen, is something I am eagerly anticipating watching. There is not much I know (aside from Wikpedia) about Bart Millard’s life, so it is exciting to see, albeit in a Hollywood drama setting, the ins and outs of how to get a band up and running, the adversity Bart faced, and how he overcome obstacles with Jesus’ help, staying true and faithful to the calling God placed and continues to place on his life. The fact that Bart was also very hands on and involved in the movie process was a great thing as well. From photos and interviews, Bart met up with cast members, crew members, and I think he spent days behind the camera on set just observing (correct me if I’m wrong!), so this movie is rather authentic and more real than I guess other sensationalised ‘inspired by a true story’ blockbusters, if you want to call them that. The fact that this movie is also being released around Easter time is fitting too, given the story of redemption, grace and forgiveness interwoven throughout the movie- as Bart’s father Arthur Millard’s journey to become a Christian should encourage us all, and reassure us that we are never too far from Jesus’ love for us. Salvation is right here for us, should we choose to believe and accept His promise of eternal life.

Without spoiling anything away (I think I did a pretty good job, which is not that hard, given that I don’t know any spoilers yet!), I’d say ‘go watch the film’ when it releases in a couple of days. Take your parents, friends, neighbours, spouse, kids, enemies, pets, anyone you can think of- cause I Can Only Imagine will be big, maybe bigger than the song itself. While I will elaborate on how I thought the film went in a couple of weeks; let me provide you with the trailer and a few other interviews and behind the scenes videos below, so that you can be psyched and ready for I Can Only Imagine to hit cinemas on March 16th 2018!