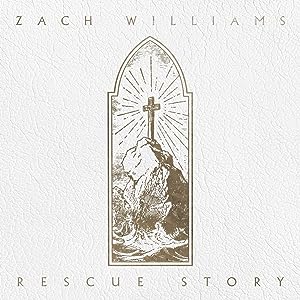 Everyone knows Zach Williams. Or at least they should, with his hit song ‘Chain Breaker’, being what I reckon, one of CCM’s most charted songs on radio in the last few years. Zach’s rise in popularity has been surreal, more like from a movie or TV show than anything else. With the release of Chain Breaker both as an EP in September 2016 and as a full length 10 track album in January 2017; this now-once-in-a-rock-band-now-reformed pastor and Provident Label Group signee has captured our hearts with his southern rock/gospel music atmosphere, in a similar vein to that of Crowder or Third Day. Even if we may not enjoy the southern gospel genre that much, we all have heard of the song “Chain Breaker”, along with his other radio hits like ‘Old Church Choir’ and ‘Fear is a Liar’. Zach’s move from being in a mainstream rock band, to pursuing a solo Christian music career after an encounter with God not too long ago, has resulted in music that is honest, hopeful, raw and emotive. His first full length album received plenty of acclaim- so much so that in 2017, he released a deluxe edition of the album, complete with a few new tracks. And then in 2018, Zach, still riding the Chain Breaker album wave, unveiled and EP titled Survivor: Live From Harding Prison, full of songs and stories that have been recorded, you guessed it, in Harding Prison. While the EP was a tad redundant- as it featured various hits of his over the years sung in a ‘live’ setting in the prison; the collection of 6 songs was enough to garner a Grammy nomination for best CCM album of the year, as the songs were earnest and honest, hopeful and encouraging, as he relates to and encourages prison inmates through the songs. Now here in 2019, we see Zach back at it again, this time with a new album titled Rescue Story- the title track and first single from the album released to radio and digital outlets in June 2019.

‘Rescue Story’ is by no means anything groundbreaking, musically, and maybe to a certain point, lyrically. Songs were written before to do with having a story and being rescued from darkness. There’s a ton. ‘Rescue’ (Lauren Daigle), ‘Be My Rescue’ (Nichole Nordeman), ‘Rescue’ (Newsboys), ‘Rescuer’ (Rend Collective), ‘Rescue Me’ (Kerrie Roberts) and ‘The Rescue’ (Adam Cappa), are just a few songs that delve into the theme of being rescued, or rather,  wanting to be rescued, from whatever is plaguing us. So in a nutshell, Zach isn’t really re-inventing the wheel, nor is he creating anything that has a tremendous ‘wow’ factor. Yet, a song exactly like ‘Rescue Story’ is rather what we need as a society- the raw, unfiltered, passionate, and at times, vulnerable singing that requires us to sit up and listen attentively, is how I reckon Zach sings most, if not all, of his songs of the past, and this new one is no different. ‘Rescue Story’ is basically the story of Zach, an autobiographical one. A song that shows us a man who was basically at the end of his rope all those years ago, and in one pivotal moment, Jesus came searching and took him out of the darkness, from despair to delight, from uncertainty to groundbreaking belief and faith. And when you hear the back story of Zach and what he has gone through to this point, and how the Lord has changed his life around, the power and effect of the song will become greater- and that’s what happened with this new one from Zach. ‘Rescue Story’ is such where I’m sure anyone who has heard of Zach Williams, his music and his story, can testify upon hearing this new melody to say that this song is God-breathed. Not that there’s only a select few that God breathes through, not at all. It’s just that I’m sure some songs are given a certain power over them, by God, to impact and affect- similar to the power in songs like ‘You Say’ (Lauren Daigle), ‘Is He Worthy?’ (Andrew Peterson), ‘Head Above Water’ (Avril Lavigne) and ‘Reckless Love’ (Cory Asbury). ‘Rescue Story’ is one of these songs.

Throughout the rest of the album, Zach has given to us songs, that though not necessarily as impacting as ‘Rescue Story’ (yet!), still resonate with the soul and allow us all to delve deep within ourselves and try to wrestle with the gut-wretching things that we need to face but often feel shame or dissonance towards, and Zach’s music allows us to face our demons as we’re challenged in our faith in a spiritual sense. Track #1 ‘Walk With You’ is a steadfast calling on our own lives to be set apart from the world, knowing full well that no matter how many times the world (or to put it bluntly, the devil!) calls us to fall into the lies that this life in front of us promises, there’s nothing greater, better and for fulfilling than walking with the Lord and being in communion with Him. A great way to start off the album, Zach encourages us all to take the road less travelled as we emark on a reflective moment through the lyrics of how ‘…the road less travelled has its battles, but there’s no battle, oh, that You won’t pull me through, in this running with the devil’s world, I’m gonna walk with You…’ ‘Less Like Me’ is a toe-tapping, heart-starting radio friendly, ‘harkens-back-to-‘Old Church Choir’’ song, and there is nothing wrong with that. Quite possibly a radio single at some point in the future, we are reminded of all the things that God is that we all ought to strive to become, and what we need to understand, needs to die as a result- that if we embark on a quest to have more mercy, grace, kindness, goodness, love, faith, patience…essentially more of the Fruits of the Spirit, then what really needs to die is our own inherently sinful nature, basically ourselves. And when we really truly encounter the Lord and all the freedom and unconditional love that He gives to us, we can’t help but act differently and long to and want to change from who we once was to what He wants us to become.

‘Stand Up’ is a testimony song as Zach encourages people to ‘stand up’ and ‘give Him praise’, as I myself am harkened back to the gospel songs of singer-songwriter/performer Carman and his songs like ‘Amen’, ‘1955’ and ‘We are Not Ashamed’, while a song like ‘Slave to Nothing’ is a rock anthem if ever there was any- Zach powerfully declares that nothing in this world holds Him down as a slave, that ‘…you can tell me what I did, you  can show me who I was before, where  I fell short, hang it over my head, but I’m not the same anymore, one  thing’s for sure, the  shackles have fallen so I’m showing shame to the door, make  no mistake, I’m a slave to nothing…’ ‘Under My Feet’ shows Zach speaking to the devil himself, reminding him that he is under our feet by the power of Christ Jesus, that the power of Christ within us is stronger than any hold of the world and what Satan had over us prior to our believing in Christ. It is a realisation that there are in fact principalities in the spiritual realm, and that where there is a God who loves us and wants our attention out of that love, there is also a devil vying for our attention also. ‘Heaven Help Me’ is a prayer and a longing for help from up above- while the song doesn’t explicitly say the word ‘Jesus’ and asking the Lord for help (instead of overtly declaring help from Jesus, the song just says ‘heaven help me’), the song nevertheless is a prompting that there is indeed a heaven out there, and that we as humans all need a little help sometimes. ‘Heaven Help Me’ is a song for the seeker, the person who wants to believe in something more, and wants to hear a song that reflects that, but doesn’t want to be bombarded with a lot of ‘religious’ imagery…yet.

‘Baptized’ is a song about the Christian faith, and the gift of redemption and eternal life given freely by the Trinity, as we see one of the most biblically sound and doctrinally accurate songs about redemption and forgiveness in a while, while the last song on the album, ‘Face to Face’, is Zach’s attempt of a modern-day hymn with stanzas and a refrain about us seeing Jesus’s glorious face on the day where we know that everything that is wrong with the world will be wiped away in the light of God’s glorious love and grace. But for me, aside from ‘Rescue Story’, the other song that is a definite standout for myself, and most definitely others, is the Dolly Parton collaboration, ‘There Was Jesus’. A song that I’m sure will crossover and become a success in the country music scene, to get a country figure as popular and influential as Dolly Parton to sing on your song is not only something that I’m sure would’ve been God-ordained, but also a song that’s destined to heal lives and bring together people regardless of ‘religious’ background. With the song being that of us as humans knowing full well that Jesus was there in our most difficult times, even if we may often believe that that moment that He’s disappeared, ‘There Was Jesus’ is certain to become a radio single in the future, no question. Maybe the second official single after ‘Rescue Story’?

A must have for anyone who his a fan of Zach and his songs before, or even fans of similar artists like needtobreathe, Rhett Walker Band or the now disbanded Third Day; Rescue Story is by far one of my favourite albums of the year, period, and most certainly is a must for a nomination for the GMA Dove Awards next year as Best CCM/Pop album. Period, there’s no question. And what I’ve said about his previous album Chain Breaker in my review previously, I’ll say here, verbatim- ‘…while Zach may not be as popular as any other Christian artist that is popular today, what Zach does have is raw honesty and heart. This album is real, and each track I’m sure will speak to different people on different levels…an album that’ll continuously be on repeat for the next few months, Zach ought to be commended for a fine effort on a project certain to be enjoyed by anyone who loves Christian music, country music or both…’ But what I will say is different now compared to then when I wrote the review (a few years ago), is that now most certainly Zach is a household name in houses that listen to CCM on a regular basis. He is indeed popular and his music has reached thousands upon thousands, and quite rightly so. His music has certainly bridged the gap between gospel, CCM and southern country/gospel, and is a reminder that this niche genre can still be alive and well, even so long after the departure of a group that I’ve loved so dearly during their career, Third Day. Yes, I firmly believe Zach’s ministry is continuing from where Third Day left off, and Zach’s albums Chain Breaker and Rescue Story are a result. A must have for anyone who loves music, period, this powerful set of 10 songs is a journey you don’t want to miss, no matter if you’re a ‘religious’ person or not! Well done Zach for such a powerful unveiling of songs. Here’s hoping and praying that God ministers through these melodies to people in months and even years to come!

3 songs to listen to: Rescue Story, There Was Jesus, Less Like Me