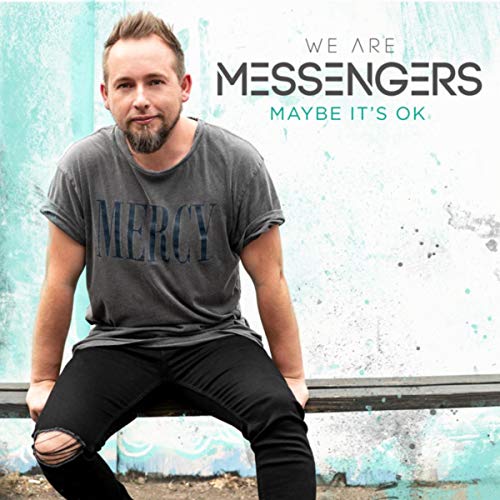 Previously recording under the moniker The Remission Flow, Irish singer/songwriter Darren Mulligan formed We Are Messengers with his wife Heidi in 2015- and what resulted was an instant radio splash, as well as a following at live shows. As Darren and his friends Dylan, Steven and Matthew strive to point listeners and fans to Jesus, the author of life and our Everything; We Are Messengers, signed to Word Label Group, released their self titled debut 14 track album way back in 2015, to much critical acclaim, and the hit singles “Everything Comes Alive”, “Magnify” and “Point To You” (of which you can read our review here!). Now, I guess it’s time everyone…for another new single from these guys. With three years in between releases; does “Maybe It’s Ok” stack up amongst other hit songs from this year? Short answer is yes.

A pop song through and through with a UK edge like how Delirious? has the Brit-pop sound that We Are Messengers possesses as well; we are blessed to hear an honest and vulnerable melody about Darren emphasising about the fact that we do not have to have it all together- we do not have to be perfect because Jesus came to earth and died and rose again. It’s a freeing notion, but sometimes we forget that our dirtiness has nothing to do with whether we’re accepted or loved, as Jesus loves us regardless of everything we do or don’t do in our lives. With that firmly in the front of our minds, I am positive that such an uplifting song can help us release the chains of perfection, and allow us to live in the security that ‘…maybe it’s ok if I’m not ok, cause the one who holds the world is holding onto me, maybe it’s alright if I’m not alright, cause the one who holds the stars is holding my whole life…’.

What a brilliant concept and notion that takes time to dwell upon- the concept of us accepting that we’re never going to be ok fully, as long as there’s sin in this world, however with Jesus in our lives, everything around us just gets a little better. Well done Darren for a thorough and entirely enjoyable new single, one that is sure to increase your popularity, and win souls for Christ. As I finish listening to this exquisite and unique listening experience, there is only one thing left to do, and that’s to press repeat. Truly, Darren, his wife, and his band of spiritual brothers have created something special. Though it’s not as enjoyable as Rend Collective (the other Irish band I am loving at the moment!) it’s still worth a listen, as I pause, sit, ponder and reflect upon what Jesus has done for me. I can’t wait to hear the album #2 from We Are Messengers, whenever that arises! Keep up the good work guys!