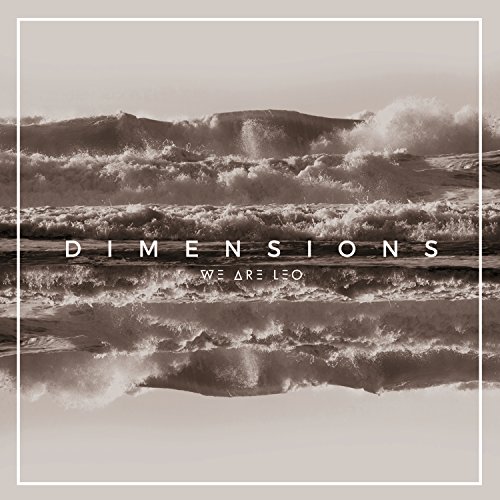 We are Leo– Dimensions (iTunes/Amazon mp3)

‘…Over the past year, I have learned a lot about unplugging and getting away from the busyness of life in the digital age. The result? I feel refreshed. The other result is that I found myself face-to-face with issues I didn’t even know I had. In the stillness and quiet, God met me and is doing a work of healing in my heart, and i’m so grateful. Dimensions is about my walk with God: the joy found in Him and a relationship in which I am learning more, daily. I don’t have this figured out yet, but I am in route. This song is about the eyes of my heart being opened up and seeing new dimensions…’ We are Leo, signed to DREAM Records (home to artists like Soulfire Revolution, New Hope Oahu, Matthew Parker, Abigail Duhon, Satellites and Sirens and Joel Vaughn to name a few), is quite possibly one of the most underrated up-and-coming bands throughout the last few years. Since their hit single “Best Thing” from their debut DREAM Records album in 2014 (Fightback Soundtrack), the band have been quiet of late, until this new song release on April 21st. This Chicago based synth-pop group are on the up and up, and with “Dimensions”, we are met with a soulful prayer and a longing to see in a different dimension than our own. With a voice and music style similar to Hawk Nelson (of both new and old), this song is a must-have for anyone who enjoyed We are Leo’s previous album, or if you are an avid fan of old-school Hawk Nelson and miss the Jason Dunn trademark sound that is lacking in the new Hawk Nelson outfit!

“Dimensions” continues to follow alongside the avenue of ‘hope in a hopeless world’ as the song carves for us a reason to step from our dimension into His. While at times feeling lyrically cliché, we still realise the encouragement that comes from just sitting back to hear the message, and how the band timely remind us that ‘…You’ve got me seeing stars, You’ve got me breathing hope, You’ve got my beating heart and now I’m seeing in another dimension…’, something that only God can undertake. “Dimensions” is as much fun-filled as it is needing to be heard in such a music industry as this. We are Leo, while not your average song title, are delivering songs unique and different compared to the average CCM material…which is a good thing. “Dimensions” is a call for us to journey alongside the band, and truly ask ourselves- what dimension are we travelling in?

We are Leo have come a long way since their album Fightback Soundtrack a few years ago. While still harbouring the synth-pop a la Owl City/Hawk Nelson music atmosphere that was created from their last album, the theme and heartfelt message of stepping forth from our dimension and seeing life through God’s is a much more mature one compared to songs previously recorded from the band. Lead singer David Duffield puts it best when he wants to explain what he wants the band to be about- We believe chains will be broken. We’re fighting back against depression, doubt, apathy & addiction with the truth and love of Christ. We know that we live in a broken world but we know we don’t have to let the failures and lies keep us down. This is music for those who want to live life to the fullest. It’s for the dreamers, the believers; it’s for the broken and the lonely who want to believe that broken hearts can find healing, and it’s music for everyone who refuses to give up despite overwhelming odds. “Dimensions” is the first single from The Rush and The Roar releasing at the end of May, thereby it will be a great present for anyone who has a birthday around that period of time (or a present for Father’s Day…maybe). A song that is challenging and comforting at the same time, “Dimensions” is a song that’ll hopefully encourage those who may feel stuck where they are. We are Leo have evolved, for the better, as the band’s evolution is one thing that I reckon will increase the popularity of the band in months to come! Well done guys for such an encouragement in “Dimensions”. Can’t wait to The Rush and the Roar at the end of May 2017!