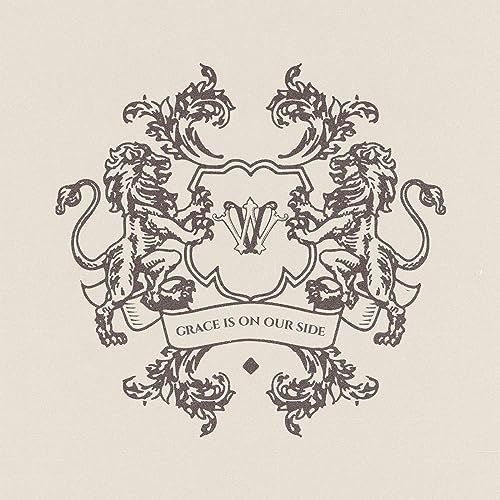 Vertical Worship– Grace Is On Our Side (Amazon mp3/iTunes)

Having recorded their live debut album Live Worship From Vertical Church in July 2012, and subsequent albums The Rock Won’t Move, Church Songs, Frontiers and Bright Faith Bold Future in October 2013, January 2015, July 2016 and April 2018 respectively; Vertical Worship, the worship part of the Harvest Bible Chapel ministry based in Chicago, are now back with a new live project. Grace Is On Our Side was unveiled in March this year, and considering the situation we are all in, with all of us staying at home due to COVID-19, there is no doubt that we all need some uplifting, comforting worship music to listen to in order for us to stay sane and reassured by God that we’ll be ok in the end. I believe that Grace Is On Our Side is one of these albums that we need. Never mind that these songs sound similar in theme and music to some other worship tracks from other artists such as Hillsong Worship, Bethel Music and Planetshakers; what matters is that with these songs, I am certain that God will speak to you, to me, to all of us. And to draw closer to God… that is the main objective of any worship album, isn’t it? If it is… then I say that Vertical Worship’s latest album has certainly done its job, and then some, as Vertical Worship’s latest offering consists of 11 live, honest, personal and vulnerable melodies, filled with raw emotion, and total devotion to our Lord and Saviour!

Bringing many different worship leaders all serving the same God into a space that serves the one purpose of making Jesus famous; the result is once again nothing short of sheer brilliance, with the now main worship leaders of Andi Rozier, Tara Cruz, Judd Harris, Laura Sweeney Smith, and Jake France each creating masterpieces and gem after gem; as Meredith Andrews, and Kyle Friedricks have since left Vertical Worship. While we all may be rolling our eyes at the release of yet another live album that could sound the same as others from years gone by; it is in my humble opinion that Grace Is On Our Side is one of the best worship albums this year; this magical offering from Provident Label Group deserves to be at least looked at by everyone on Apple Music or Amazon or Spotify or whatever other streaming service you use. Though the blend of different worship styles are somewhat contrasting and complementary in this album; the band’s entire discography has proven that vibrancy and uniqueness is indeed a wonderful breath of fresh air! It’s something different, that stands out, and that’s definitely a good thing! With a roughly equal split of representative artists leading each track; I am glad that Vertical Worship is back doing what they do best- creating simple yet effective worship anthems for the church to sing- and no doubt I am sure quite a lot of these songs will end up on Sunday morning setlists for churches around the world in the future sometime!

Opening up the track list is the Judd Harris-led worshipful and Hillsong-like title track; as we are met with a somewhat musically generic and lyrically simplistic worship anthem- which doesn’t really do the album justice. In my opinion, this track, written by Matt Redman is easily the lowest point on the album, and to judge the entire 11 tracks by this one mishap would be unfair. Still, in the song’s cliché lyrics and music, Judd’s passion and exuberance still shines through and encourages us to push through the song despite the blandness. No doubt this track will find its way to Sunday setlists soon- and hopefully then I will connect with the song that exalts Jesus and declares that His grace is by our side. Fortunately, the second track “Weapon”, the piano led ballad led by Jake France, is miles more engaging and captivating. Maybe it’s because I generally like ballads more so than upbeat tracks- they’re much more emotional, personal and relatable. Regardless, Jake’s enthusiasm is commendable, as he brilliantly conveys honesty and raw emotion and relays to us that at all times but especially in the hard times, we can let our worship be like a weapon on the battleground between Jesus and the world for our soul. As Jake ardently cries out the eternal truth that ‘…because the cross put the enemy to shame, now my song echoes through an empty grave…’; there’s absolutely no way I can’t sing along and worship with great passion as well- as we are coming up to Eater, what better way to sing about Jesus rising from the grave, than to declare that it was the cross together with the grave that has made Satan redundant?

Judd then returns for the emphatic, beautifully sung and compelling radio friendly ballad “Faithful Now”, written by Hank Bentley, Jonathan Smith, Mia Fieldes and Eddie Hoagland, and is easily one of the highlights of the album, as we explore the concept of God’s faithfulness stretching beyond our own personal circumstances and the happenings on the other side of the world. Reassuring us in a manner similar to the group’s hit song “Yes I Will”, Judd declares in this song over and over that because Jesus was faithful in the past, this means that he’s faithful at this very moment and into the future as well. A great track to dispel our worrying fears and doubts; Lauren Sweeney-Smith produces one of the album’s finest moments with a fantastic display of utter praise and adoration to our Father and Saviour. Similar in theme to Chris Tomlin’s “Lay Me Down”, we are reminded that as believers, we don’t need to have all of the answers to all of life’s questions. We don’t need to receive the answers right now from God. All we need to know is that God is in control, and thus we can with confidence lay down our life to Him over and over and over. Surrendering to something we can’t see is scary, but with one listen or maybe two listens to this song (and maybe with each subsequent listen!), the concept becomes less scary and more freeing and satisfying! Andi Rozier, Jason Ingram and former lead singer of Desperation Band Jon Egan then join forces in songwriting, as Andi and Tara Cruz lead “Pure Exaltation”, a simple yet exquisite and enthralling worshipful anthem that proclaims ‘…worthy are You, God, worthy is Your name, worthy of our praise, we worship You, here we stand in awe, You deserve it all, Jesus evermore, we worship You…’; while the midpoint of the album is “Not Done Yet”, the first single from Grace Is On Our Side, penned by Meredith Andrews, Jake France and Jonathan Smith, with Jake on lead vocals, essentially declaring the promise of Jesus still having greater things yet to come in store for each of us, as we are still breathing and still have an aching in our hearts as to what our purpose and meaning of life is.

Generally with albums, either the first half is great and the second underwhelming…or vice versa. But with Grace Is On Our Side, both sides of the album are on the whole equally inspiring and powerful. “Miracles” is one such inspiring and powerful moment on the tracklist, as Lauren gracefully delivers a spontaneous free worship track of sorts using the pre-chorus of Sean Curran’s “Live Again” as a backdrop (was anyone else waiting for Lauren to sing out the chorus to “Live Again”? Maybe that song aside from the pre-chorus, is the proprietary of Passion and can’t be used except for them?); while Matt Redman’s “All Praise (Sing Praise)” from the album Let There Be Wonder is covered here also with Andi on lead vocals. Comparable to Matt’s version, this song unfortunately, though enjoyable and very, very solid, as we worship and sing out that Jesus Christ deserves all the praise we give to Him because our new life is beginning because of Him; is unnecessarily long at 7 minutes- entering into Jesus Culture length territory! Still not a skippable track, Vertical Worship remind us of the simplicity of entering into pure, unbridled communion and worship with Jesus, our Father and our Friend. Simply put, worship doesn’t have to be flash nor performance based, but rather maybe much more effective and efficient when reflective, personal and honest. Such is the nature for many of the tracks from Grace Is On Our Side. While being sung in a corporate setting at church, these songs can easily be translated into a one-on-one worship setting between just us and God. Such is the case with the prayerful and earnest track “Hidden Places”, the slower tempo keys led melody led by Tara and written by Andi, Meredith Andrews and Jason Ingram relaying to us that Jesus is lifted high especially in the hidden places- which I’m sure is compelling and powerful in a church setting, but is equally as effective when we’re singing just to God with no one else in the room.

As quickly as the album has started, we are met with the last few tracks before the finish. “God Of Abraham”, led by Judd, asserts that Jesus will be with us every day until the end of time, as Jason Ingram and Jon Guerra have written a powerful and moving declaration. Yet it is the album closer “New Jerusalem”, led by Jon, the brings me chills and is the perfect album ender. As Jon emphatically uses imagery and vivid metaphors comparing our worship and our devotion to God to the second coming of Jesus Christ; it really took a while for me to fully grasp the meaning of the song, maybe 3-4 listens. But after I realised that Jon was saying that we need to worship God with the knowledge that He will be coming back soon (and really believe it!), then the penny dropped- this song is needed in churches, as we remember that the God who promised that He will take care of all of our own problems and our own issues, is the same God that has prepared a place for us in Heaven. How cool is that? That alone is reason to worship, don’t you think? Because God is holy, and He has our names written in the Book of Life, and He will help us on our journey called life while we are still here. Amen, everyone, repeat after me alright?

Vertical Worship has done it again! With many bands/movements that have been impressing me of late, including Hillsong, Bethel Music, Jesus Culture, Passion, Desperation Band, Worship Central and New Life Worship; this group of musicians who are obviously hungry for Jesus Christ and His presence, stand tall amongst all of these talented men and women of God. It’s a tough gig, ‘competing’ with musicians who are equally as good, however Vertical Worship is sure to be around for a while yet. As I hope and pray that the individual artists Andi, Jake, Lauren, Judd and Tara create solo albums for us all to hear sometime soon, fans of worship music in general should not miss this fine and enjoyable worship experience! Well done Vertical Worship, and I look forward to the next album, whenever that may be! Perhaps a Christmas album?

3 songs to listen to: Faithful Now, Not Done Yet, God Of Abraham