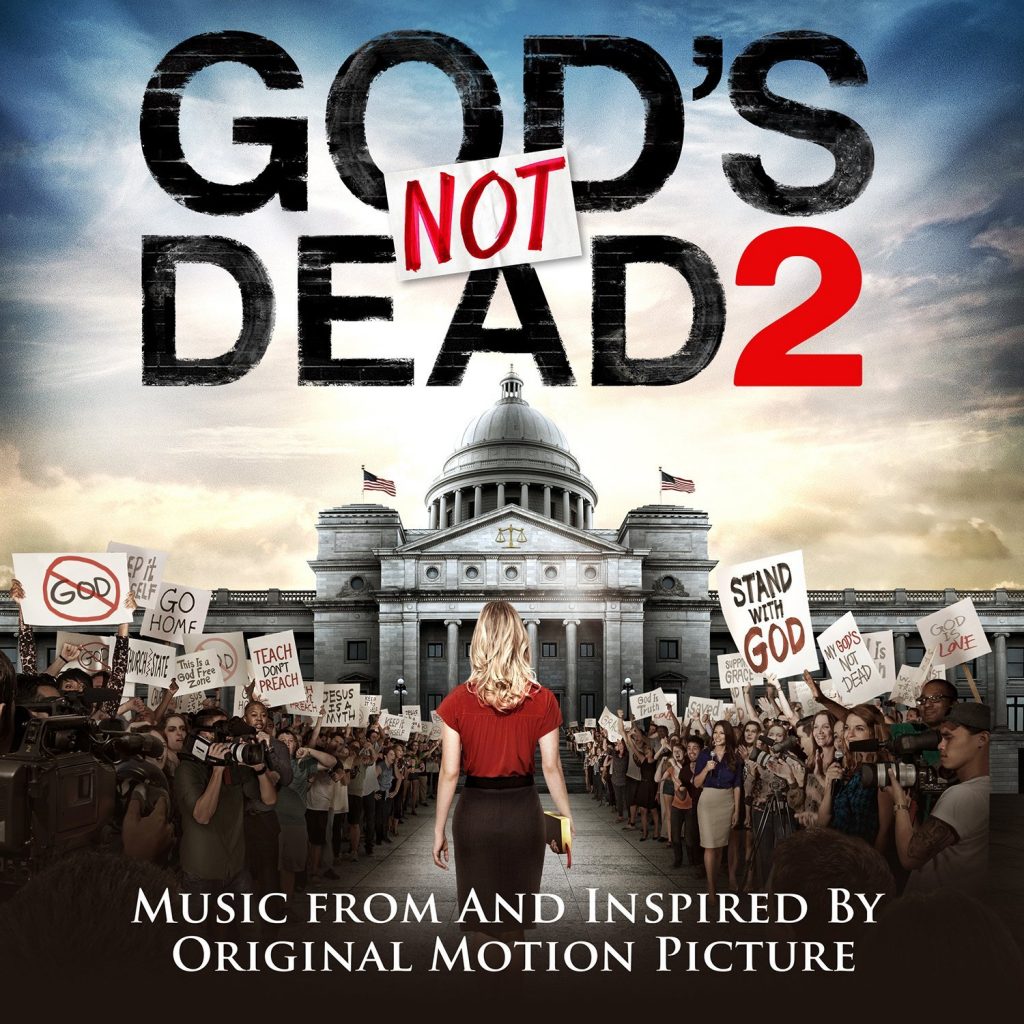 It’s been 2 years since the best-selling controversial yet equally empowering God’s Not Dead, a movie about Josh Weaton (Shane Harper), a university student who becomes headstrong in a debate against his university professor (Kevin Sorbo) about the existence of God. With as many lovers of the movie has there was haters, God’s Not Dead is possibly the most talked about Christian movie since…well maybe since ever. To make a movie about the topic of God in an age where Hollywood and the media have embraced the contrary seems like a big feat, and one that’ll cause all types of reactions, from praise and adulation to utter disgust. With special cameos from Duck Dynasty stars Willie and Korrie Robertson, and the CCM pop/rock group Newsboys; God’s Not Dead took to the theatres in March 2014, and was a success commercially and a mixed bag critically. PureFlix, the distributor of the movie, even partnered with Provident Label Group to distribute a collection of songs inspired by the movie.

Years on in 2016, God’s Not Dead 2 releases in April, and this time the debate moves from the classroom to the courthouse. And while both movies and their storyline about God, and people’s beliefs in standing up for Him, sadly only appeals to a certain demographic; we are nevertheless seeing something happening that hasn’t probably occurred in a long time through any faith based movie- lives are being impacted and changed. Whether it is through the Newsboys songs or even the storyline itself, the movie is certainly leaving a mark on both the Christian industry and mainstream alike. And now releasing March 18th, ahead of the April 2016 movie release, Provident Label Group have distributed God’s Not Dead 2: Music Inspired By the Motion Picture, a collection of 11 tracks, each with a central message of standing up for our beliefs, standing up for the Word of God, and standing up for faith itself.

Released in September 2015, as the first radio single for Newsboys’s new album Love Riot, this theme song for God’s Not Dead 2 is as hard-hitting and confrontational as you can get. “Guilty” calls for us to take a stand for our beliefs, and while the song specifically delves into beliefs in God, this song is a reminder to stand firm in our core values as well- our moral compass and what we believe is right and wrong. Even if no one stands with us, will we be willing to stand, even if it means to stand alone? Written as a theme song for a storyline where the central character stands before the judicial system and recounts her own beliefs in God, and how she’s not afraid to deny Him in the classroom as well as the courthouse, Newsboys have once again brought their A-Game to remind us that when it comes to our faith, we are to assert our guilty nature when it comes to our belief in Christ. Are we unashamed to declare what we believe? With an anthemic feel and a heartfelt message to comfort, conflict and confront; we are met with questions we need to seriously answer- are we willing to pay the price for what we believe? Are we guilty about proclaiming love and peace to those we meet? Are we guilty as charged, and are we willing to champion that notion, and not be like Peter who denied his affiliation with Jesus when He was being targeted and questioned for being the Son of God? Kudos to the band for such a poignant song, and a favourite of mine amongst these 11 tracks.

Re-recording the song with the addition of the His Little Feet Children’s Choir; Audio Adrenaline’s current radio single “Sound of the Saints” has been making airwaves this year. Now fronted by ex-Stellar Kart lead singer Adam Agee in this new and fresh lineup of the band after a stint by Kevin Max as lead singer; this age-old band still has the same message. Mark Stuart, original lead singer of the band, is still songwriting for the group, and is still in the background, mentoring and leading. And this is where “Sound of the Saints” came about- the band has always been a champion for the poor, especially in Haiti. The song, first on the God’s Not Dead 2 Soundtrack, is a worship song about us declaring God’s name, and all the saints of God and believers in Him lifting up our praises in a collective spirit. The addition of the children is again a nice touch- reminding us all that everyone from every nation can still sing the same song we’re declaring, with equal and sometimes more passion that we can ever deliver.

“Dead Man Walking”, originally written by indie worship leader Erik Nieder and with backing vocals by Ellie Holcomb, is a current radio single by Fair Trade Services artist John Tibbs, and with a southern gospel/worship sound; the heart of the melody is brought to the fore through the chorus itself- that God took the dead in us and made it alive when He breathed His life into our weary selves, encouraging us all through his ethereal vocals that ‘…your love, your love, it opened my eyes, I was a dead man walking til the Lord gave me life…’ Current radio single and title track of their most recent album, Hawk Nelson’s “Diamonds”, though only a tad under 3 minutes, is as encouraging as ever, with a powerful steady drum beat, and lead singer Jon Steingard encouraging us all that God makes diamonds out of every and any situation we find ourselves in. Incredibly evident in the bridge, we are reminded that ‘…the joy of the Lord, it’ll be my strength, when the pressure is on, He’s making diamonds…’, a realisation we need to take into considering, often on a daily basis, as we walk in the truth that sometimes the most beautiful diamonds can come out of the most difficult of circumstances. Citizen Way, MercyMe and The Afters also contribute with “When I’m With You”, “Welcome to the New” and “Live on Forever” respectively, each with the message of encouraging the listener with the comfort of God being with us always (“When I’m With You”), the notion that the old in us is dead and that the new that Christ gives is filling the gap, that what we do or don’t do won’t make God love us any more or less than what He’s loving us right now (“Welcome to the New”), and re-aligning our focus from the now to the forever, encouraging us all to place our focus not on the temporary but on the permanent (“Live on Forever”).

Humble Beast, a label with artists like Beautiful Eulogy and Propaganda, have signed a distribution deal with Provident Label Group, and thus, we see songs from these two aforementioned artists on the compilation, each of them delivering rap and spoken verse to highlight the themes of standing out for the gospel (“Exile Dial Tone”) and raising the banner of Christ wherever we are and whatever situation we are in (“Raise the Banner”) from Beautiful Eulogy and Propaganda respectively. The last two tracks, “Rest of My Life” and “Directions”, are both quite new, and are both exclusive to this album. Since I’m reviewing this album prior to the album release date, I don’t have much to say about these two tracks yet, aside from the fact that these two will probably have much to do with the overall theme about standing up for beliefs and what we assert in our lives to be true.

I ought to say that as a whole, God’s Not Dead (and God’s Not Dead 2) will impact a lot of lives, despite it not being universally liked. Because frankly, the movie is probably not for everyone. Some people may love it, some may abhor it, while others may just watch it because the next guy is. Regardless, the movie will raise questions, as will this compilation album as well. Movies like God’s Not Dead will be enjoyed by those who need to re-align their faith in Christ, and hopefully this album also encourages them to take that first step. It’s great to see all the songs cover the similar theme, and with a myriad of genres, from worship, to pop, rock, and hip hop, there’s something for everyone on this compilation. Kudos to Provident Label Group for this album, and a reminder of the movie which releases in April 2016. Can’t wait for the movie? How about you?

3 songs to listen to: Diamonds, Live on Forever, Sound of the Saints