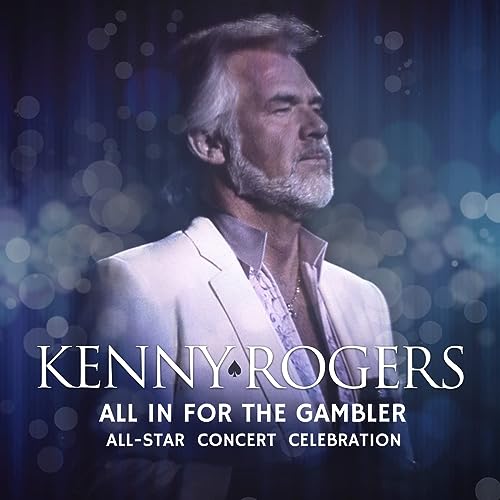 Various Artists – All In for the Gambler: All-Star Concert Celebration [Live] (Amazon mp3/iTunes)

Kenny Rogers is a living legend…or rather, he was. Kenny passed away in 2020, leaving behind a legacy of standout songs, and just an era of country music that has impacted and influenced people around the world for decades. Even though Kenny is no longer with us, his music definitely is, and while not as popular right now, Kenny was definitely so, during the 70s, 80s and 90s, spawning hits like ‘We’ve Got Tonight’, ‘Through the Years’, ‘Islands in the Stream’, ‘The Gambler’ and ‘Lady’, to name a few. We as a site will be writing about Kenny and his impact and influence on music and society in the series of Identity-Building and Iconic artists, in an upcoming TBD post, so I guess it was fitting and timely for me to say my own thoughts about this tribute CD compilation collection indeed about Kenny and his music, recorded live way back in 2017 when Kenny himself was still alive and they had one last tribute for him. While it has taken 5 years to remaster and release this footage in audio format, this selection of 16 songs (I’m sure there was much more on the night) is sure to make any Kenny Rogers fan smile- though not as thorough as a normal best-of album would be; this unveiling of Kenny’s final project, is something to behold; as this live album is a must, especially if you miss Kenny and want to hear people sing his songs and interpret them in a way that we never heard before; or if you love Kenny Rogers music full stop. While I am not necessarily as familiar with Kenny’s music (compared to the next guy), nor am I familiar with every song on this live project; I have still enjoyed this live compilation. Who knows, maybe me listening to this live tribute album is me being accustomed to all things Kenny, and maybe, sooner than I would even think, I’ll be discussing Kenny’s impact and influence amongst the people. Regardless, this album is superbly crafted, and one of the best, as far as live tribute projects go.

We will write about Kenny Rogers and his impact and influence on music, in the upcoming weeks, so I’ll just leave this ‘review’ post with this thought or two- Kenny is by far one of the pioneers of country music, in a sense that he made it popular and cool to call yourself a country music fan, especially in the 1980s. His songs ‘Lady’, ‘Islands in the Stream’, ‘We’ve Got Tonight’ and ‘She Believes in Me’ were all country/pop crossover successes- Ronan Keating recorded a cover of ‘She Believes in Me’ in the early 2000s, while ‘Islands In the Stream’ is perhaps one of the most well-known Kenny Rogers songs ever (aside from ‘The Gambler’ I believe). Kenny is just one of these people that are as iconic as his songs, as we see a lot of these tracks on this album, be as timeless as 1980s country music itself. There’s a sense of purity and richness, of joy and awe, that surrounds Kenny’s music, a sense that music back 40-30 years ago wasn’t tainted with all the electronic fusion that music (pop or country) is infused with right now, and maybe it’s the nostalgic person in me, but I prefer a lot of the music back then as opposed to music now, country music included. Kenny is one of these artists; and is definitely an artist I’m looking forward to writing about whenever I do write about his impact and influence on music. Till then, I can listen to whatever compilation Kenny has recorded, and remind myself that just because something is from the 1970s, 1980s or 1990s, doesn’t make it any less impactfuil, iconic or even life-changing. Well done Kenny for the music, and kudos to this tribute album for being able to be released, 5 years since the original concert was held. Maybe some official video footage from the night can be next and unveiled in a DVD-esque format? One can only hope.

4 songs to listen to: She Believes in Me, Through the Years, We’ve Got Tonight, Islands in the Stream