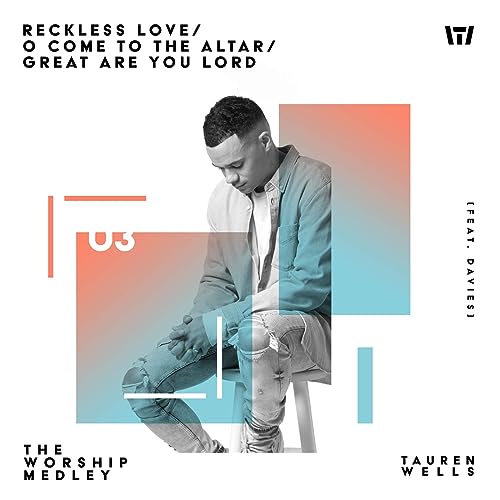 Tauren Wells, ex-lead singer of pop band Royal Tailor (2010-2014), unexpectedly stepped down and went solo a few years ago, much to everyone’s surprise. His debut solo album Hills And Valleys followed in 2017, which spawned the radio hits “Love Is Action”, “Known”, “When We Pray”, “God’s Not Done With You” and the title track; while this year Tauren unveiled Citizen Of Heaven, a superb sophomore album garnering the hits “Miracle”, “Famous For (I Believe)”, “Like You Love Me”, and “Until Grace”. While you all can read my brother’s review of Hills And Valleys here as well as hit review of Citizen Of Heaven here; this past month Tauren unveiled another release…which is seemingly surprisingly but on a deeper look, it’s not. A nearly 7 minute medley has surfaced (called “The Worship Medley: Reckless Love / O Come To The Altar / Great Are You Lord”), and features the guest vocals of Davies, as Tauren exquisitely gives us a worship tune- far from the genre we’re used to hearing from him. Though the release of this song is unexpected- I just found out about the track on the day of release through my Release Radar playlist on my Spotify, while some of us may still be spinning both Hills And Valleys and Citizen Of Heaven on our preferred streaming service, simply because it’s that good, and that these two albums will stand the test of time in my opinion; I personally reckon that Tauren’s worship medley has shown us the direction that he’s probably going to go into in the coming months and years. “The Worship Medley” from Tauren is a stellar track and a real Holy Spirit-inspired and God-breathed moment- one that you all need to hear at least once!

With Tauren Wells mashing up the songs of Cory Asbury’s “Reckless Love”, Elevation Worship’s “O Come To The Altar” and One Sonic Society’s “Great Are You Lord” with just the keys and drums (it’s not really a mashup per se, but more of a seamless transition from one part of one song to another part of a different song!), Tauren’s latest offering is a song we’ve all heard before (quite literally with different cover versions!), yet there’s something about Tauren’s melody that makes the track fresh and hip- even though it shouldn’t be! And that’s because this medley has so much heart and passion, and reminds us all of a concept and a notion of unbridled and unashamed worship to God, that we all need to fully understand- no doubt a song we all need to listen to again in order for us to be amazed and enamoured by the God of the universe. It’s still a mystery as to why Royal Tailor really broke up, but nevertheless, Tauren’s subsequent second album and this single still impress, with his songs continuing to be on rotation on my iTunes playlist of late. Perhaps Tauren will release another full length worship album in the near future (I’m thinking mid-2021)… but until such a time, let’s just sit back, enjoy and let God minister to our souls!