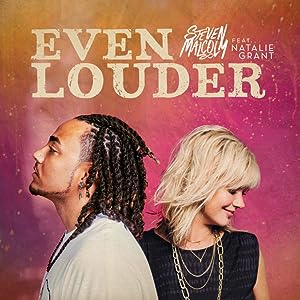 If there is one song that has become popular this year, and in my book, should be a definte shoe-in as being one of my favourite songs of the whole year come year’s end? Yes, you guessed it- ‘Even Louder’. Originally written by Benji Cowart, Jonathan Jay, Matt Armstrong and Tony Brown (all songwriters, that’s why I myself cannot recognise these people!), for a project called The Church Will Sing– songs written solely for the purpose to be sung by both the local and global church, with no intention of finding radio success or even attributed to a particular CCM artist; what has transpired is something that makes what I believe this song ‘Even Louder’ so emotive and heartfelt. Recorded in its original form by undisclosed artists for The Church Will Sing project, alongside other indie artists for their own projects (ISAAC and People Of the Earth, featuring the vocals of Tricia, former lead singer of Superchick); the song made a transformation of sorts earlier on this year, when rapper-hip/hop artist Steven Malcolm, alongside worship duo Leeland; decided to reinvent ‘Even Louder’, keeping the chorus and altering the verses to reflect Steven’s forte of rap; for his second album titled The Second City.

The song in it’s original form is poignant and encouraging- we are met with honesty and humility, that even if everything else falls, we will sing louder His name, because He is still worthy of worship, regardless of what is happening around us. For me it took a little time to get used to the version that Steven himself decided to unveil on his full length album, featuring guests Leeland, but overall, the rap juxtaposed against the worship element of the chorus works. And how Steven is unveiling the song again, this time adding Natalie Grant to collaborate with him and fill in for the Leeland parts. And while I myself may think that Leeland (especially lead singer Leeland Mooring) is hard done by- personally, they could’ve easily done a radio version of the song with Leeland, right? Or is the radio version of any song only reserved for anyone who is on a major label, for which Leeland are not? Nevertheless, while for someone who has thoroughly enjoyed the original version, alongside enjoying Steven Malcolm’s rendition with Leeland, this rendition, as much as I love Natalie and her music, seems a little too radio friendly for me. Still, the heart and passion are there, and the song itself is great, yet to cut down a song that was present on The Second City standing at 5:22 to the radio version just released standing at 3:30; it seems like the song is rushed, even when it shouldn’t be. I still love the song, maybe just not this version…yet. Don’t get me wrong, Natalie Grant’s music is great, and Steven is one of this generations up-and-coming rappers within the Christian hip-hop industry; yet this collaboration, as well intentioned as it is, feels a little off. Nevertheless, I’ll continue listening to the song, and maybe, just maybe, I’ll enjoy this version as much as previous ones; as the months go by.

So there you go- ‘Even Louder’ by Steven Malcolmn, featuring Natalie Grant. A shoe-in on WOW Hits 2020 (most songs with a radio version, and most songs featuring Natalie Grant, usually are!), this is a must have if you have enjoyed Steven’s previous rapping material, Natalie Grant’s previous work, or both. And if you have heard all the incarnations of ‘Even Louder’ before this, then hopefully keep an open mind, maybe more open than me. This is a song, either in the form of the version on The Second City or The Church Will Sing; that will become a revolutionary worship song into the future. Destined to be sung, in either format, in churches around the world as the months progress; expect to see a lot of Steven and his fusion of hip hop and worship as the impact of ‘Even Louder’ continues to grow. An award for the song for being the ‘Song of the Year’ at the upcoming Dove Awards?