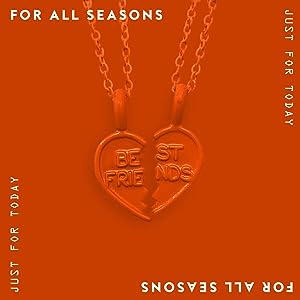 For All Seasons – Just For Today – Single (iTunes/Amazon mp3)

For All Seasons are doing a new thing. Ever since they signed to Centricity Music (arguably one of the most underrated labels, housing artists like Jason Gray, Andrew Peterson, Lauren Daigle, Jordan Feliz, Unspoken and Plumb, to name a few), this relatively new trio from California unveiled to us an EP titled Clarity in early 2018. This EP was in fact one of my favourites of that particular year- the trio delivered songs full of enthusiasm and passion- continuing to assert their prominence in today’s CCM/worship music scene with Clarity and the standout songs on the EP, ‘No Other’, ‘Bigger Than’ and ‘Higher’. Fast-forward to 2019, and the band are partnering with patreon to unveil to us one song a month- and at the end of their one-song-a-month project, I’m sure each of the songs will be collated together to form an album!

‘Every Good Thing’, ‘Light And Momentary’ and ‘Friends’ are the three songs unveiled to us throughout this year thus far, and while I won’t really go into the background as to the story behind the one-song-a-month project (I’ll let previous reviews of these songs do that for me!), what I will say is this- each of the songs are focused on a theme that the band want to unpack and uncover. ‘Every Good Thing’ was on the topic, if you will, of seeing, and how we as humans can sometimes see things from a perspective not really fully atuned to what God is really undertaking, thus the song is a reminder to step back and realise that in God’s point of view, every good thing comes from Him, and every other thing, will be used and shaped by Him to form a good thing that comes out of it. ‘Light And Momentary’ tackled the theme of waiting and longing, delving into the Bible verse of 2 Corinthians 4, where Paul reminds us that though we may have present weakness, that doesn’t compare and ought not take away from the expectation and anticipation of the future glory of Christ set before us. ‘Friends’ was the last release, ushers to the fore the forgotten topic of loneliness- a topic that we as a human race can often sweep under the rug in an attempt for us to declare that we’re fine, when we know that we aren’t. Loneliness is a taboo topic, but it shouldn’t be…but, in reality, who would really want to discuss the fact that they themselves are lonely, even if they have amassed a lot of material possessions? ‘Friends’ was and still is one of my favourite songs by the band ever, and its topic is ever so current and at times confronting, as we hopefully combat a serious epidemic spreading across the world!

‘Just for Today’ is song #4, and this track delves into the realms of friendships and relationships, and how after we get past the loneliness and find a true friend (or friends), we can understand that in such a relationship, there will be ups and downs, and there will be people that can carry the weights and share the burden of our own. The song, catchy and electronic, and a tad under 3 minutes, is a reminder that ‘…just for today, we can forget about the problems we face, we can remember every moment is grace, and we can, we can celebrate that, we can, we can share the weight…’ A topic that is often overlooked, as what is focused upon right now is the romantic connection rather than the friend connection, this song is a timely reminder to do life together with a close few friends that really know us and love us anyway, to get out of our reclusive selves and start interacting with our fellow man. To find things in common with people, but also have enough respect, discourse, and compassion to see the other side of things when we do come across a topic that ourselves and our friends disagree on. For the measure of a true friend is a sign that they will respect us and even ask more questions and want to learn about said topic that is disagreed upon, rather than having arguments at every turn. Let us not be afraid at opening up to our friends, and reminding ouerselves that as we’re made in our Father in Heaven’s image, so to are we made with His characteristics- since God the Father, Son and Spirit are in a Triune community, so too are we made for such a very thing! As so, let me leave this review with a Instagram post by the band about the song. And now what can we do? Listen to ‘Just For Today’, and not to be scared to share the weight! Well done Emily Hamilton (lead singer) and co. for creating a joyous song with a very real and heartfelt message!

Last month’s song, Friends, was written from a season of loneliness, and so this next month and next song is all about FRIENDSHIP. In seasons of “friendship,” we are walking in community with others. If we are experiencing hardship, we are actively sharing the weight of that burden with others. In these seasons we feel a closeness and a gratitude for people, as we see how God uses us as many members of one body to complement and build each other up. Or perhaps it’s a time when we’re sowing the seeds of friendship, through another’s hard times, in order to reap the beauty of walking through it together. We hope that over the next month your eyes will be opened to see the beauty in living life in community. This next month isn’t about shallow acquaintances, it’s about those who are in the trenches with you. And, it’s about seeing that God has designed us to be WITH others. The next song comes Friday and it’s dedicated to our close community and friends who have 1) helped us in difficult times & 2) allowed us to be their support in their times of need.