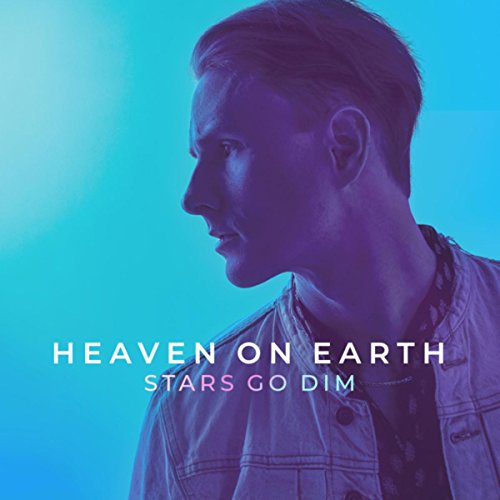 Borne out of a few members from hard rock Christian band Pillar deciding upon a side project which has now turned into a full time ministry, Stars Go Dim have been one of pop/rock’s biggest secrets until now. Releasing Love Gone Mad and Between Here and Now back in 2008 and 2011 respectively, it was their signing to Word Entertainment at the beginning of 2015 that led to quite possibly one of the biggest label debuts of any new artist of that particular year. Their self titled debut album released in October 2015 digitally and January 2016 physically, that led to many sought-after radio singles like ‘You are Loved’, ‘Walking Like Giants’, their not-that-popular-yet-still-popular-in-Australia ‘Stars’ as well as their retake on hymn ‘Doxology’; we are now met with Chris Cleveland, the lead singer of the band, delivering yet another new track, titled ‘Heaven on Earth’. From a new album in the future, or just a non-album single that is a pre-cursor to their new album? Who knows. The cover of the single only features Chris on the cover, and leads myself even to wonder- is Stars Go Dim now a one-man-show? We have seen bands go from bands to a band of one person in years gone by, Plumb in particular way back in the day. And we’ve also seen bands of just one person from the beginning, Owl City being a prime example. Nevertheless, I guess it doesn’t really matter whether Stars Go Dim is Chris Cleveland and co. or just Chris himself and that’s it. What matters is that the new music is flowing and while this new song is just a tad under 3 minutes, the heart and message is nevertheless something we all need to hear especially during this time as a nation and as a world united to see heaven invade earth and bring God’s presence into situations that is very much needed at this point in time!

While there has been a shift in musical genre, from when Stars Go Dim was just a few guys from Pillar, til now; the heart and message is still the same. Lead singer Chris Cleveland, vocally reminding me of Justin Engler from Abandon, Samuel Jay Hancock from Luminate, as well as worship artist Phil Wickham; delivers ‘Heaven on Earth’ with fervent passion and enthusiasm, even if the music in the background seems to be a little electronically drawn out and light in comparison to much of the music on their self titled debut album. If what I rated on their debut album was 4.5/5, I’d rate this one 3.5 not because of the message and the lyrical content by any means. In fact, I reckon this song ‘Heaven on Earth’ has some of the most challenging lyrics I’ve heard throughout all of 2018 thus far- ‘…take my life and let it be, set on fire for all to see, break me down, build me up again, don’t leave me the way I’ve been, take my heart into Your hands, come and finish what You began, til I seek Your kingdom first, til I shine, shine like heaven on earth…’

These lyrics above ought not to be sung lightly, as we realise that it is in the moment of surrendering our own plans that we find that as we seek the things not of this world and not of ourselves but to see the heart and follow what He longs to bring to fruition in society today, we can be free of expectations placed upon us by our parents and even ourselves. All we have to do is be a good follower, and shine like heaven on earth, being a conduit of His love to everyone we meet. Chris, though he’s delivered a song that sadly has found me wanting musically, has nevertheless delivered something of a lyrical genius as we are forced to think of whether we are really living for Him or not. Whether our lives are a reflection of what He has done for us; or whether there’s really a change at all. Serious stuff. In fact, just hear the song, and make a judgement yourselves. And while I’m at it, let me just say that because of the extreme CCM nature of the track, I expect this song to be a shoe-in on WOW Hits 2019…even though the music isn’t really that groundbreaking!

So there you have it… ‘Heaven on Earth’, by Stars Go Dim…or should I rather say, by Chris Cleveland of Stars Go Dim? Or just Chris Cleveland? Nevertheless, Chris has brought to the table heart and passion, even if the musical undertone leaves a little to be desired. Still, people will nevertheless be blessed, as I am. But I still can’t shake off the fact, that the music has to be as engaging as the lyrics, that for a song to be captivating and groundbreaking, both the music and the lyrics have to be heartfelt, and for Stars Go Dim, only the lyrics were so. As a package, I’ve heard other songs with a similar theme (‘Heaven is Where You Are’- Erik Nieder, ‘Heaven’- Delirious?, ‘Heaven Fall Down’- Phil Wickham, ‘Heaven in the Real World’- Steven Curtis Chapman), all of which have stood out for me much more than this new one by Stars Go Dim. Nevertheless, that’s not to say that this song doesn’t have a solid score- it does. 3.5 in a holistic sense isn’t that bad. The song just leaves me with wanting more from the band, wanting me to have a sense of a ‘wow’ factor that I did when I heard songs like ‘All I Have’, ‘Walking Like Giants’, even ‘Doxology’, all from their debut album. Still, here’s hoping Chris and the team bring to the table something more unique musically and something just as poignant lyrically as Stars Go Dim ready their sophomore album release on Word Label Group in the near future!