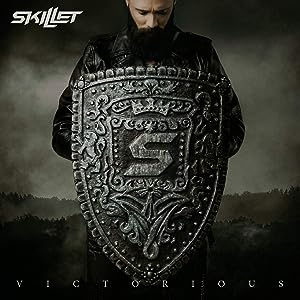 Skillet. A band that has become a big selling one, since their inception in the mid-1990s. Comprising now of husband-and-wife John and Korey Cooper, alongside guitarist Seth Morrison and drummer and backing vocalist Jen Ledger; this quartet is indeed one of Christian music’s most relatable band in the history of Christian rock music, and a band that, like Switchfoot, has successfully crossed over into mainstream, without compromising their message of hope, encouragement, and at times, confrontation that can be a catalyst to turn into carefully calculated action. In the aftermath (3 years) of what I reckon is one of the band’s most cohesive projects to date (Unleashed); the band now release their new album Victorious, just released on August 2nd 2019. While the band has never shied away from being inclusive and creating a live set and songs that appeal to listeners who may not be accustomed to hearing Christian music, they have never once stopped sharing their faith and what it means to them.

As we hear Victorious, their unashamed nature of declaring Christ is very evident in their music, and that is what I believe has continued to make this band a very respectable one- never compromising on musical art, while still declaring the good news of Christ, even if Skillet themselves are touring with others who may not share the same faith as them! As Victorious released around three years later than one of my own favourite albums from the band, Unleashed, the wait is worth it as John Cooper and co. have unveiled to us an album to be proud of, regardless of which era of Skillet we are all fans of. Featuring hard rock, radio friendly music, even ballads and pop-rock symphonic anthems; there are songs for literally any fan of any era of this band. One of the most influential bands in modern Christian rock, or even influential within mainstream rock as well; this album is a definite standout in 2019 as a whole, both as a part of CCM and mainstream rock too!

Released as a lyric/music video in May 2019, Skillet’s new song ‘Legendary’ is as hard hitting as they come, and as first single’s go (‘Sick of It’, ‘Feel Invincible’ and ‘Hero’ all spring to mind from previous albums), ‘Legendary’, though a few cliché and repetitious lyrics, still gives us the punch that a Skillet radio single should give us. Though I reckon not as groundbreaking lyrically and thematically as other songs of Skillet’s past, what is momentuous about this song is that it is personal to the band. As John explains in his interview with Billboard; ‘…the general message of ‘Legendary’ is to make your life count. You’re going to have a lot of hard things in your life. Sometimes it will get you down, but you need to make your life count. You are only here for so long on earth, so every day fight to be legendary. For me, what this song is about is it’s to all the people who said that Skillet would never make it. They said we were too Christian. We were too pretty. We had too many girls in the band, too many keyboards. It’s too musical. It’s too this or too that and 23 years later and 10 albums later, we’re very unlikely people to still be doing music…’ It is with this quote in mind that I can appreciate the place in which the song is born out of. And though musically and lyrically at times, it can seem a little like a ‘safe’ Skillet song, the heart and passion are still there. Sure the song may not be like some of the chart-topping songs from Rise or Comatose, but maybe, this song wasn’t meant to be. ‘Legendary’ is a high energy motivator- expect this song to be in concert song set lists for a loooonnngg time yet!

Let me just say that from the outset, this is not meant to be yet another review that people read. Because there’s a lot of reviews out there for this album. Some positive, some not as much. Leave it to more professional websites to create their views of the album- NewReleaseToday.com, JesusFreakHideout, Indievisionmusic, The Christian Beat and Today’s Christian Entertainment are some of the sites that provide a Christian outlook and worldview on the album, while reviews from other mainstream sites keep coming in hot- just google ‘skillet victorious review’ and you can see what I mean. So for this site to come in and yet add another review-like post will be very much redundant. Because it will be. Frankly, I’m sure the diehard fans of Skillet, aka the Panheads; would’ve bought this album from the word ‘go’, while others who may be a little more indecisive would’ve read up on what there is to read up by now. So writing a review a few days after the album releases can seem like a ‘been-there-done-that’ for anyone who has read a review of it on the day it has dropped (2nd August 2019). But having said all that, what I will indeed say is this- Victorious is a lot to a lot of people. Lyrically, stylistically, tempo-wise, for me it’s very much different compared to other albums of Skillet’s past. And that’s ok.

You have hard rock there, in the representatives of ‘You Ain’t Ready’, ‘Reach’, ‘Rise Up’ and ‘Never Going Back’; while songs like ‘Terrify the Dark’ and ‘Anchor’ are the reflective more radio-friendly types of melodies. ‘Legendary’ itself is a great first song and first radio single, and sort-of a ‘stick-it-to-the-haters’ song in such a sincere and level-headed way, while ‘Finish Line’ tries to marry together the genres of rock, country and hip-hop together, and for the most part, the song is a success. The title track ‘Victorious’, as said by John Cooper himself, is inspired by Linkin Park and more specifically, the lead singer Chester Berrington. Through all of their musical life, Skillet has said what a profound impact that Linkin Park has had on their music too, and for such a tragedy to befall the music world not too long ago (Chester’s suicide), what has weighed heavy on the band’s heart has now translated into a song that people can reflect upon, and really understand that such a despondant scenario can still give birth to such a song that can hopefully heal and have an impact on people’s lives moving forward- a song about depression and loneliness and a message we all need to understand, that there is a way out even in the unlikeliest of circumstances.

The album isn’t perfect, and it doesn’t pretend to be. There are many moments on the album that I enjoy more than others- songs like ‘Terrify the Dark’, taken directly from the Scriptures, is one of my favourite songs from the band since ‘Stars’ way back in 2016, and as said by John himself, ‘…many people believe that darkness is more powerful than the light. That evil will overcome good. I don’t agree with that. This song [Terrify the Dark] is taken from a scripture that I love which reads “The light shines in the darkness. And the darkness has not overcome it.” When you realize that the light within you is stronger than the darkness around you, then fear cannot have a hold on your life. I got through times in my life where I forget that. This song is a reminder of the truth…’ ‘Save Me’, perhaps one of the most vulnerable songs the band has ever done, is a timely reminder for people to be vulnerable to the people around them. A song that speaks of the dark parts of ourselves that we don’t always want to show, for whatever reason, ‘Save Me’ is sort-of a companion piece to Kelly Clarkson’s ‘Dark Side’- both speaking of the dark parts in ourselves and wondering whether people will love all parts if they only knew and saw what was underneath. Dark and heavy, to put it bluntly; ‘Save Me’ is a song that I’m sure will be one of the most impacting songs on the album when listeners hear it.

‘Anchor’ continues the radio-friendly vibe set before it through ‘Terrify the Dark’, and speaks of the person, or people, or even a divine power (in my own case, the song is speaking about God Almighty) who is our anchor when times are difficult; while ‘Back to Life’ is basically a heavier version of ‘Bring Me To Life’ by Evanesence, as Skillet attempt to create a head-banger as the final track on the album. While I’m sure it’s not everyone’s cup of tea, ‘Back to Life’ nevertheless get’s people’s attention. And while for me personally, I feel like the middle of the album is where the band gets a little too bogged down- ‘Rise Up’, ‘Reach’ and ‘Never Going Back’ all sound very similar musically with similar progressions, and just an overall atmosphere; I’m sure these three songs will speak to others in a much more profound and impactful way than it has done for me. That doesn’t mean that these three songs will never speak to me at all, it may happen in the future- and I’m open to that. Just right now, these three songs didn’t stand out to me as having a ‘wow’ factor, and that’s ok!

‘…what’s really interesting about Skillet is the fan base is so diverse. There are the Christian fans. There are the church group fans, but there are also hard rock fans, people who love Metallica and Slipknot. They like Skillet too, and then you have people who like Skillet that don’t even like rock music. Then we have a lot of girl fans that a lot of rock bands don’t usually have because there’s a nice softer feminine side of Skillet. It’s not because we have girls, but we have Jen singing sometimes and there’s piano and strings. There’s some romance to it. The reason people never heard us is because it’s not like all of our record sales come from one specific format. They all come from different areas and it’s cool because that’s how our music is. It’s made up of a lot of different kinds of influence…’ Skillet’s mark on music is very evident, and this above quote shows us how much.  While many can say that you can either succeed in either Christian music or mainstream; Skillet’s history shows us otherwise. John and Korey, Seth and Jen have crafted a career of non wavering, sticking by their beliefs, and creating album after album full of hits that can relate to a variety of people across the spectrum of race, religion, creed, colour and ideologies.

Skillet’s music, like Switchfoot’s, is indeed universal, which a lot of Victorious is. As critically acclaimed and emotive as Victorious is; Skillet’s new album is anything but cliche. Though at times it may have felt like some songs over-repeat themselves; as a whole, the band continue to deliver great music that can appeal across various other cultures, creeds and opinions- and that and that alone, should be a driving force into at least hearing the album once! Well done Skillet for such a hard-hitting album that can hopefully motivate us all in our own daily walks of life. Now…off to listen to Collide and Comatose…and then Victorious again? Well done John and co. for delivering one of the best rock albums I’ve heard in a while. Hoping that more songs become singles and impact peoples lives both now and into my future.

3 songs to listen to: Save Me, You Ain’t Ready, Terrify the Dark